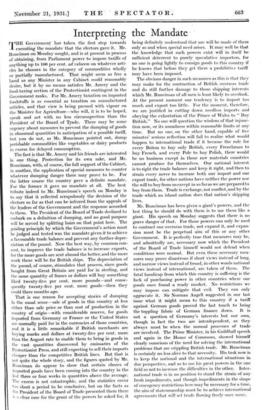 the Mandate THE Government has taken the first step towards execUting the mandate that the electors gave it. Mr. Runciman on Monday sought, and is at present in process of obtaining, from Parliament power to impose tariffs of anything up to 100 per cent. ad valorem on whatever arti- cles he chooses in the category of commodities wholly or partially manufactured. That might seem as free a hand as any Minister in any Cabinet could reasonably desire, but it by no means satisfies Mr. Amery and the food-taiing section of the Protectionist contingent in the Government ranks. For Mr. Amery taxation on imported foodstuffs is as essential as taxation on manufactured articles, and that view is being pressed with vigour on the Minister for Agriculture—who will, it is to be hoped, speak and act with no less circumspection than the President of the Board of Trade. There may be some urgency about measures to prevent the dumping of goods in abnormal quantities in anticipation of a possible tariff, but you do not, as Mr. Runciman pointed out, dump perishable commodities like vegetables or dairy products in excess for delayed consumption. • The fact is that Mr. Amery and his friends are interested in one thing, Protection for its own sake, and Mr. Runciman, with, of course, the full support of the Cabinet, in another, the application of special measures to counter whatever dumping danger there may prove to be. For the latter course the country gave a definite mandate. For the former it gave no mandate at all. The best tribute indeed to Mr. Runciman's speech on Monday is to say that it reflected scrupulously the decision of the electors so far as that can be inferred. from the appeals of the leaders of the Government,and the response accorded to them. The President of the Board of Trade declined to embark on a definition of dumping, and no good purpose will be served by splitting hairs on that point here. The guiding principle by which the Government's action must he judged and tested was the mandate given it to achieve a favourable trade balance and prevent any further depre- ciation of the pound. Now the best way, by common con- sent, to improve the trade balance is to increase exports, for the more goods are sent abroad the better, and the more work there will be for British ships. The depreciation of the pound, of course, stimulates that process, since goods bought from Great Britain are paid for in sterling, and the same quantity of francs or dollars will buy something liked twenty-five per cent. more pounds—and conse- quently twenty-five per cent. more goods—then they could three months ago.

That is one reason for accepting stories of dumping in the usual sense—sale of goods in this country at less either than sale price or than cost of production in the country of origin—with considerable reserve, for goods imported from Germany or France or the United States are normally paid for in the currencies of those countries, and it is a little remarkable if British merchants are buying marks and dollars at twenty-five per cent. more than the August rate to enable them to bring in goods in the vast quantities discovered by emissaries of the Protectionist Press, and still expecting to sell their imports cheaper than the competitive British lines. But that is. not quite the whole story, and the figures quoted by Mr. Runciman do appear to show that certain classes of imported goods have been coming into the country in the last three or four weeks in quantities above the average. The excess is not catastrophic, and the statistics cover too short a period to be conclusive, but on the facts as the President of the Board of Trade presented them there is a clear ease for the grant of the powers he asked for, it being definitely understood that use will be made of them only as and when special need arises. It may well be that the knowledge that such powers exist will in itself be sufficient deterrent to purely speculative importers, for no one is going lightly to consign goods to this country if he knows that before they get there a prohibitive tariff may have been imposed.

The obvious danger in such measures as this is that they may make for the contraction of British overseas trade and do still further damage to those shipping interests which Mr. Runciman of all men is least likely to overlook. At the present moment our tendency is to import too much and export too little. For the moment, therefore, we are justified in cutting down needless imports and obeying the exhortation of the Prince of Wales to " Buy British." No one will question the wisdom of that injunc- tion now, or its soundness within reasonable limits at any time. But no one, on the other hand, capable of five minutes' serious reflection will fail to realize what would happen to international trade if it became the rule for every Briton to buy only British, every Frenchman to buy French, and every Pole to buy Polish, there would be no business except in those raw materials countries cannot produce for themselves. Our national interest is to right the trade balance and keep it right, and then to strain every nerve to increase both our import and our export trade, for other nations have neither the power nor the will to buy from us except in so far as we are prepared to buy from them. Trade is exchange, not conflict, and by the trade which an island nation does that nation's shipping lives.

Mr. Runciman has been given a giant's powers, and the last thing he should do with them is to use them like a giant. His speech on Monday suggests that there is no grave danger of that. For those powers can only be used to contract our overseas trade, not expand it, and expan- sion must be the perpetual aim of this or any other Government. It is perfectly true that measures may be, and admittedly are, necessary now which the President of the Board of Trade himself would not defend when conditions were normal. But even these necessary mea- sures may prove disastrous if short views instead of long, and narrow views instead of broad, in other words national views instead of international, are taken of them. The fatal handicap from which this country is suffering is the lack of purchasing power in other countries where our goods once found a ready market. No restrictions we may impose can mitigate that evil. They can only aggravate it. Sir Norman Angell suggested in our last issue what it might mean to this country if a tariff against German goods proved the last touch to bring the toppling fabric of German finance down. It is not a question of Germany's interests but our own, though in fact the two are interdependent, as they always must be when the normal processes of trade are involved. The Prime Minister, in his Guildhall speech and again in the House of Commons, showed himself clearly conscious of the need for solving the international problems that are crippling British trade. Mr. Runciman is certainly no less alive to that necessity. His task now is to keep the national and the international situations in due perspective, and so to use his great powers in the one field as not to increase the difficulties in the other. Inter- national trade is in no position to stand the strain of any fresh impediments, and though impediments in the shape of emergency restrictions here may be necessary for a time, the aim of statesmanship must be to achieve international agreements that will set trade flowing freely once more.