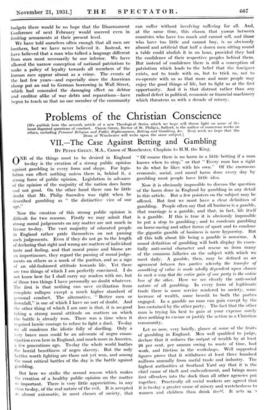 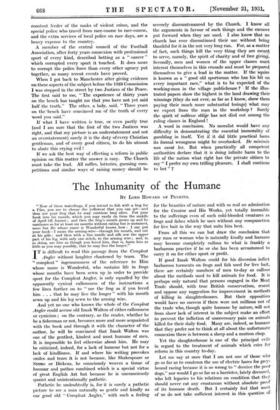 [We publish here the seventh article of a new Theological Series which we hope will throw light on some of Om most disputed questions of conduct. Canon. Green, Rector of St. Philip's, Salford, is the author of numerous works on ethics, including Personal Religion and Public Righteousness, Betting and Gambling, &c. Next week we hope that the Dean of Winchester will write upon the same subject.]

VII.—The Case Against Betting and Gambling

BY PETER GREEN, M.A., Canon of Manchester, Chaplain to H.M. the King. . - ONE of the things most to be desired in England to-day is .the creation of a strong public opinion against gambling in every form and shape. For legis- lation can effect nothing unless there is, behind it, a strong force of public opinion. Legislation in advance of the opinion of the majority of the nation does harm and not good. On the other hand there can be little doubt that Mr. Philip Snowden was right when he described gambling as " the distinctive vice of our age."

Now the creation • of this strong public opinion is difficult for two reasons. Firstly we may admit that strong moral judgements on any matter arc not much in favour to-day. The vast majority of educated people in England rather pride themselves on not passing such judgements. Even if they do not go to the length of declaring that right and wrong are matters of individual taste and feeling, and that moral praise and blame are an impertinence, they regard the passing of moral judge- ments on others as a mark of the puritan, and as a sign of an old-fashioned attitude towards life. Yet there arc two things of which I am perfectly convinced. I do not know how far I shall carry my readers with me, but of those two things I have personally no doubt whatever. The first is that nothing can save civilization from complete collapse except a much higher standard of personal conduct. The alternative, " Better men or downfall,". is one of which I have no sort of doubt. And the other thing of which I am sure is that, it is no good taking a strong moral attitude on matters on which the battle is already won. There was a time when it required heroic courage to refuse to fight a duel. To-day we all condemn .the idiotic folly of duelling. Only a very brave man could be an advocate of negro eman- cipation even here in England, and much more in America, at few generations ago. To-day the whole world loathes the horrid beastliness of negro slavery. But the only battles worth fighting are those not yet won, and among the most critical battles of the day is the battle against 'gambling.

But here we strike the second reason which makes time creation of a healthy public opinion on the matter so important. There' is very little appreciation, in any class to-day, of the real nature of the evil. It is accepted as almost axiomatic, in most classes of society, that " Of course there is no harm in a little betting if a man knows when to stop," or that " Every man has a right to do what he likes with his own." Of the enormous economic, social, and moral harm done every day by gambling most people have little idea.

Now it is obviously impossible to discuss the question of the harm done in England by gambling in any detail in this article. But a few pointers on the subject may be offered. But first we must have a clear definition of gambling. People often say that all business is a gamble, that marriage is a gamble, and that, in fact, life itself is a gamble. If this is true it is obviously impossible to put a stop to gambling ; and to condemn gambling on horse-racing and other forms of sport and to condone the gigantic gamble of business is mere hypocrisy. But all this talk about life being a gamble is nonsense. A sound definition of gambling will both display its essen- tially anti-social character and rescue us from many of the common fallacies on the subject with which we meet daily. A gamble, then, may be defined as an agreement between two parties whereby the transfer of something of value is made wholly dependent upon chance in such a way that the entire gain of one party is the entire loss of the other. Here we see clearly the anti-social nature of all gambling. In every form of legitimate trade there is some service rendered to society, some increase of wealth, some benefit to both the parties engaged. In a gamble no man can gain except by the loss sustained by the other party. The fact that the other man is trying his best to gain at your expense surely does nothing to excuse or justify the action in a Christian community.

Let us now, very briefly, glance at some of the fruits of gambling in England. Men well qualified to judge, declare that it reduces the output of wealth by at least 20 per cent. per annum owing to waste of time, had work, and friction in the workshops. Well supported figures prove that it withdraws at least three hundred millions annually from useful trade and industry. The highest authorities at Scotland Yard say that it is the chief cause of theft and embezzlement, and brings more first offenders into the dock than all other agencies put together. -Practically all social workers are agreed that it is to-day a greater cause of misery and wretchedness to women and children than drink itself. It acts as constant feeder of the ranks of violent crime, and the special police who travel from race-course to race-course, and the extra services of local police on race days, are a heavy expense to the country.

A member of the central council of the Football Association, after forty years connexion with professional sport of every kind, described betting as a " cancer " which corrupted every sport it touched. It does more to corrupt the police force than every other agency put together, as many recent events have proved.

When I got back to Manchester after giving evidence on these aspects of the subject before the 1923 Commission I was stopped in the street by two Justices of the Peace: The first said to me, " The experience of thirty years on the bench has taught me that you have not yet said half the truth." The other, a lady, said, " Three years on the • bench have convinced me of the truth of every word you said."

If what I have written is true, or even partly true (and I am sure that the first of the two Justices was right, and that my picture is an understatement and not an overstatement) surely it is the duty of every Christian gentleman, and of every good citizen, to do' his utmost to abate this crying evil !

If we ask the best way of effecting a reform in public opinion on this matter the answer is easy. The Church must take the lead. All raffles, lotteries, guessing com- petitions and similar ways of raising money should be severely discountenanced by the Church. I -know all the arguments in favour of such things and the excuses put forward when they are used. -I also know that no church has ever discontinued their use without being thankful for it in the not very long run. For, as a matter of fact, such things kill the very thing they are meant to serve, namely, the spirit of charity and of free giving, Secondly, men and women of the upper classes must interest themselves in this crusade and must be prepared themselves to give a lead in the matter. If the 'squire is known as a " good old sportsman who has his bit on every important race," what is to be expected j of the working-man in the village publichouse ? = If the- illus. trated papers show the highest in the land drawing their winnings (they do not ever,- as far as I know, show-them paying their much more substantial losings) what may we expect from the man in the workshop ? Surely the spirit of noblesse 'oblige has not died out among the ruling classes in England !

A word in conclusion. No moralist would have any difficulty in demonstrating the essential immorality of gambling in itself. Yet if it did little practical harm its formal wrongness might be overlooked. De minimis non carat lex. But when practically all competent authorities declare that it is doing infinite harm to the life of the nation what right has the private citizen to say " I prefer my own trifling pleasure. I shall continue to bet " ?