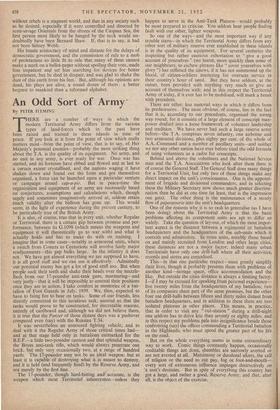 An Odd Sort of Army'

HERE are a number of ways in which the modern Territorial Army differs from the various types of land-forces which in the past have been raised and . trained in these islands in time of peace. If you look at it from the point of view which really matters most—from the point of view, that is to say, of, Her Majesty's potential enemies—probably the most striking thing about the T.A. is the quality of its equipment. No army, and no unit in any army, is ever ready for war. Once war has started, and its fortunes have ebbed and flowed and at last to a certain extent crystallised, and the nations waging it have shaken down and found out the form and got themselves organised, a force can be launched upon a particular venture or campaign armed cap-a-pie. But in peace-time the organisation and equipment of an army are necessarily based on conjectures, assumptions and calculations which, though sagely and sometimes imaginatively arrived at, seldom retain much validity after the balloon has gone up. This would seem, in the light of experience during the present century, to be Particularly true of the British Army. It is also, of course, true that in every unit, whether Regular or Territorial, there is a certain gip between promise and per- formance, between its G.1098 (which means the weapons and equipment it ,will theoretically go to war with) and what it actually holds and has to make do with on training. I imagine that in some cases—notably in armoured units, where a switch from Comets to Centurions will involve fairly major readjustments—this gap bulks large. In the infantry it does not. We have got almost everything we are supposed to have, it is all good stuff and we can use it effectively. Admittedly our potential enemy has got a lot of good stuff too. But when people suck their teeth and shake their heads over the muzzle- flash from our 17-pounder anti-tank guns, murmuring—and very justly—that it will be impossible to conceal their positions once they are in action, Make comfort in memories of a bat- talion of Foot Guards in July, 1939. We, then, expected to have to bring fire to bear on tanks. Some of ,our friends, less directly committed to this invidious task, assured us that the tanks would prove to be constructed, for inscrutable reasons, entirely of cardboard and, although we did not believe them, it is true that the Panzer of those distant days was a pushover compared even (say) with the Russian T.34. It was nevertheless an armoured fighting vehicle; and to deal with it the Regular Army of those critical times had— and at that stage held only in battalions earmarked for the B.E.F.—a little two-pounder cannon and that splendid weapon, the Boyes anti-tank rifle, which would always penetrate one brick, but only very occasionally two, at a range of hundred yards. The 17-pounder may not be an ideal weapon; but at least it is capable of destroying what it is meant to destroy, and it is held (and frequently fired) by the Reserve Army, and not merely by the first line. The 17-pounder, though hard-hitting and, accurate, is the weapon which most Territorial infantrymen—unless they happen to serve in the Anti-Tank Platoon—would probably be most prepared to criticise. You seldom hear people finding fault with our other, lighter weapons.

So one of the ways—and the most important way if any trouble starts—in which the Territorial Army differs from any other sort of military reserve ever established in these islands is in the quality of its equipment. For several centuries the inspiriting but rather cautious exhortation to " give a good account of yourselves " (we learnt, more quickly than some of our neighbours, to eschew phrases like " cover yourselves with glory ") has stiffened the sinews, if it has not summoned up the blood, of citizen-soldiers mustering for overseas service in their country's hour of need. But they have seldom, at the outset, been provided with anything very much to give an account of themselves with; and in this respect the Territorial Army of today, if it ever has to be mobilised, will mark a break with precedent.

There are other, less material ways in which it differs from its predecessors.. The most obvious, Of course, lies in the fact that it is, according to our precedents, organised the wrong way round; for it consists of a large element of conscript man- power drafted into a loose framework of volunteer leadership and tradition. We have never had such a large reserve army before—the T.A. comprises seven infantry, one airborne and two armoured divisions, plus eighty per cent. of the whole of A.A.-Command and a number of ancillary units—and neither we nor any other nation have ever before tried the odd formula of using volunteers as a cadre for conscripts. Behind and above the volunteers and the National Service men and the T.A. Associations who look after them there is of course the General Staff. The General Staff does many things for a Territorial Unit, but only two of these things make any direct impact on the unit's consciousness.. One is, the appoint- ment of brigade and divisional commanders, and in selecting these the Military Secretary now shows much greater discrimi- nation than he did at one time (at least, that is the impression one gets). The other thing is the maintenance of a steady flow of paperasserie into the unit's headquarters. One of the reasons why' it is so rash to generalise (as I have been doing) about the Territorial Army is that the basic problems affecting its component units are apt to differ so widely. Take the question of lay-out, of which the most impor- tant aspect is the distance between a regimental or. battalion headquarters and the headquarters of the sub-units which it controls and administers. In some units, notably those based on and mainly recruited from London and other large cities. these distances are not a major factor; indeed many urban Territorials have only one drill-hall where all their activities, records and stores are centralised.

This—in that one particular respect—must greatly simplify their lives, though it probably presents them with problems of another kind—storage space, office accommodation and the like. But outside the cities distance is always a limiting factor. I—if I may be excused for speaking from personal experience= live twenty miles from the headquarters of my battalion; two of its companies share part of the same premises, but the other four use drill-halls between fifteen and thirty miles distant from battalion headquarters, and in addition to these there are two isolated platoons in other places. This means, in practice, that in order to visit any " out-station " during a drill-night one seldom has to drive less than seventy or eighty miles; and in this respect my problems pale into insignificance beside those confronting (say) the officer commanding a Territorial battalion in the Highlands, who must spend the greater part of his life on the road.

But to the whole everything seems in some extraordinary way to work. Comic things constantly happen, occasionally creditable things are done, shambles are narrowly averted or are not averted at all. Matrimony or duodenal ulcers, the call of religion or the need to cut pay, fog or foot-and-mouth-- every sort of extraneous influence impinges destructively on "a unit's destinies.. But in spite of everything this country has got a large, and rather a good, Reserve Army; and that, after all, is the object of the exercise.