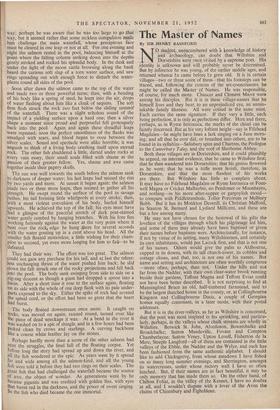 The Master of Names

0 student, • unencumbered with a knowledge of .history and archaeology, can doubt that Wiltshire , and DOrsetshire were once, visited by a.supreme poet. His ,identity is. unknown and will probably never be determined. But by inference he was young, of the earlier middle ages, and returned whence he came before he grew old. It is in certain villages—two or three score of them—that his footsteps can be traced, and, following the custom of the art-connoisseurs, he might be called the Master of 'Names. He was responsible, of course, for much more. Chaucer and Clement Marot were among his disciples. But it is in these village-names that he hiniself lives and they bear, to an_unprejudiced eye, an unmis- takable family likeness. All were coined in the same mint. Each carries the same signature. If they vary a little, each being perfection, it is only as,perfections differ. Here and there, perhaps, as in Ryme Intrinsica, the marks of the chisel can be faintly discerned. But at his very loftiest height—say in Fifehead Magdalen—he might have been a lark singing on a June morn- ing; and all that he ever did, or breathed into others, are to be found in its syllables—Salisbury spire and Chartres, the Prologue to the Canterbury Taletr, and the roof of Sherborne Abbey. Both these villages are in Dorsetshire, and it could plausibly be argued, on internal evidence, that he came to Wiltshire first; that he then wandered into Dorsetshire; that his genius flowered as he went; that he was a trifle more lavish, therefore, in Dorsetshire, and that the most flawless of his works are there. But Wiltshire has. little to complain about. It may have no Fifehead Magdalen or Ryme Intrinsica or Font- Well Magna or Cricket Malherbie, no Pendomer or Moonhayes, and nothing—in his more after-supper or gargoylish mood— to compare with Piddletrenthide, Toller Porcorum or Melbury Bubb. But it has its Monicton Deverill, its Christian Malford, its Stanton St. Bernard and Lydiard Millicent, and these are 'but a few among many.

He may not have chosen for the bestowal of his gifts the loveliest of the villages through which his pilgrimage led him, and some of them may already have been baptised or given their names before baptisms were. Architecturally, for instance, if not by virtue of its setting, many Wiltshiremen, and certainly its own inhabitants, would put Lacock first, and that is not one of his 'names. Others would give the palm to Aldbourne, cupped in its downs, with its tall church-tower, its cobbles- and cottage closes, and that, too, is not one of his names. But name and setting and architecture are often worthily congruous —more often, perhaps, than not, Under the hills and not far from the Nadder, with their own clear-water brook running beside their gardens, Teffont Magna and Teffont Evias could not have been better described. It is not surprising to find at Manningford Bruce an old, half-timbered farmstead, said to be the largest thatched house in the county, or, at Collingbourne Kingston and Collingbourne Ducis, a couple of Georgian homes equally consonant, in a later mode, with their postal addresses.

But it is in the river-valleys, as far as Wiltshire is concerned, that the poet was most inspired in his sprinkling, and particu- larly, perhapi', in the 'valleys whose chalk streams are wholly in ' Wiltshire. ' Berwick St. • John, Alvediston, Bowerchalke and Broadchalke; Sutton Mandeville, Fovant and Compton Chamberlayne; Sutton Veney, Upton Lovell, Fisherton de la Mere, Steeple Langford—all of them are contained in the little valleys of the Ebble, the Nadder and the Wylye, and each has been fashioned from the same authentic alphabet. I should like to add Chicksgrove, from whose meadows I have fished on so many long summer evenings, and Sherrington, amongst its watercresses, under whose rectory wall I have so often lunched. But, if their names are in fact beautiful, it may be only memory that has made them so. On the other hand, of Chilton Foliat, in the valley of the Kennet, I have no doubts at all, and I wouldn't dispute with a lover of the Avon the claims of Chisenbury and Figheldean.