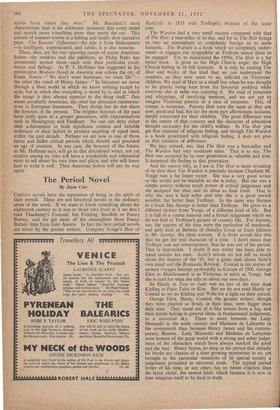 CERTAIN novels have the reputation of being in the Spirit of their period. These are not historical novels in the ordinary sense of the word. If we want to know something about the eighteenth century as it was to those who lived in it we don't read Thackeray's Esmond, but Fielding, Smollett or Fanny urney, and we get more of the atmosphere from Fanny urney than from Jane Austen. In fact the best period novels are never by the greater writers. Compare Yonge's Heir of Redclyffe in 1853 with Trollope's Warden of the same year.

The Warden had a very small success compared with that of The Heir, a best-seller of its day, and for us The Heir brings us into an atmosphere so completely foreign as to seem fantastic. The Warden is a book which we completely under- stand—it engages our sympathies as Trollope meant them to be engaged. Yet, to understand the 1850s, The Heir is a far better book. It gives us the High Church angle, the High Church feeling in its full intensity. It is only by reading The Heir and books of this kind that we can understand the cruelties, as they now seem to us, inflicted on Victorian children. We 'read of Hare as a small boy when he was thought to be greedy being kept from his favourite pudding while everyone else at table was enjoying it. We read of penances and whippings, of terrifying sermons, and we are apt to imagine Victorian parents as a race of monsters. This, of course, is nonsense. Parents then were the same as they are now, good and bad, but for the most part affectionate, anxious, deeply concerned for their children. The great difference was in the nature of that concern and the character of education thought necessary for the child's welfare. In The Heir you get that intensity of religious feeling, and though The Warden is a book penetrated with religious feeling, it does not give us that intuition of difference.

We may remark, too, that The Heir was a best-seller and The Warden had very moderate sales. That is to say, The Heir was accepted by its own generation as valuable and true. It answered the feeling in that generation.

And the reason why, as I see it, The Heir is more revealing of its time than The Warden is precisely because Charlotte M. Yonge was a far lesser writer. She was a very good writer or she would not be readable as she is today. But she was a simple person without much power of critical judgement and she accepted her time and its ideas as final truth. That is why she was a best seller and why she is a good period novelist; far better than Trollope. In the same way Surtees in a book like Sponge is better than Trollope. He gives us a different picture from Yonge, of a different kind of life. But it is full of a coarse humour and a brutal judgement which we do not find in Trollope's picture of country life. For Surtees, too, the squires of his time were the perfection of manhood, and girls such as Belinda of Handley Cross or Lucy glitters in Mr. Sponge, the ideal women. It is from novels like this that we get the real character of a time. I don't mean that Trollope was not contemporary, that he was out of his period. That is impossible. I doubt if any writer has been able to stand outside his time. Scott's novels do not tell us much about the history of the '45, but a great deal about Scott's own mind and the Romantic Revival. Conrad in his stories of eastern voyages belongs profoundly to Europe of 1900. George Eliot in Middlemarch is as Victorian in spirit as Yonge, but she is read for what she tells us about our own days.

So Hardy in Tess or Jude was no less of his time than Kipling in Plain Tales or Kim. But we do not read Hardy or Conrad as we do Kipling and Wells for a light on their period.

George Eliot, Hardy, Conrad, the greater writers, though they were planted so firmly in their time, were bigger than their time. They stand out of it like towers from a, fog, and their minds belong in general ideas, in fundamental judgement, to a universal sky. There is more between the Lady Murasaki in the tenth century and Madame de Lafayette in the seventeenth than between Henry James and his contem- porary, Benson. Lady Murasaki and Madame de Lafayette were women of the great world with a strong and sober judge- ment of the characters which have always marked the good and the bad. Henry James, so deep in his period that already his books are classics of a time growing mysterious to us, yet brought to the particular situations of its special society a judgement grounded in universal truth. The typical period *titer of his time, or any other, has no better criterion than the latest clichd, the newest label, which because it is new in time imagines itself to be final in truth.