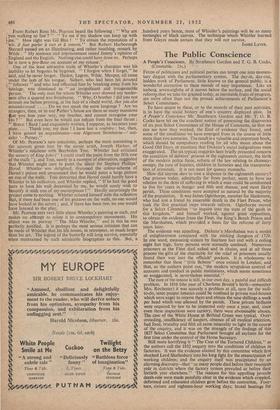 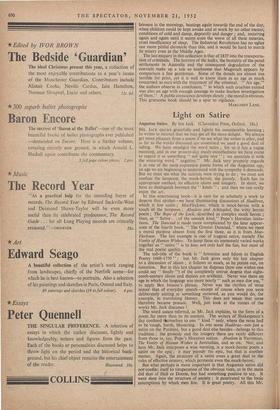 A People's Conscience. By Strathearri Gordon and T. G. B. Cocks. (Constable. 21s.) FEUDS of politicians and political parties can tempt one into momen- tary disgust with the parliamentary system. The day-in, day-out, hidden work of Parliament, little known to the general public, is a wonderful corrective to these moods of easy impatience. Like an iceberg, seven-eighths of it moves below the surface, and the social reforms,that we take for granted today, as inevitabk fruits of progress, are more often than not the prosaic achievements of Parliament's Select Committees.

To have access to these, or to the records of their past activities, is to have the social history of one's country displayed alive. In A Pe'ople's Conscience Mr. Strathearn Gordon and Mr. T. G. B. Cocks have hit on the excellent notion of presenting the discoveries of six past. Select Committees of the House of Commons, so that we can see how they worked, the kind of evidence they found, and some of the conditions we have emerged from in the course of little more than two centuries. The result is a valuable and important book, which should be compulsory reading, for all who moan about the Good Old Days, or maintain that Dickens's social indignations were exaggerated. The six typical enquiries here briefly presented concern the condition of debtors' prisons in the eighteenth century, the .birth of the modern police force, reform of the law relating to chimney- sweeps, the care of lunatics, children in factories and the transporta- tion of criminals. It is not meat ,(or queasy stomachs. How did anyone dare to owe a sixpence in the eighteenth century? Our prisons today, admittedly far from perfect, seem to have no relation to the dens of suffering in which a man could be condemned to live for years in hunger and filth and disease, and most likely perish. These conditions were accepted as natural by the majority of the population. It was James Oglethorpe, member for Haslemere, who had lost a friend by miserable death in the Fleet Prison, who took the first practical steps towards reform. Oglethorpe moved for a Select Committee "to inquire into the state of the gaols in this kingdom," and himself worked, against great opposition, to obtain the evidence from the Fleet, the King's Bench Prison and the Marshalsea, which provided a basis for the reforms of forty years later.

The evidence was appalling. Dickens's Marshalsea was a model of enlightenment compared with the stinking dungeon of 1729. In one ward, measuring sixteen by fourteen feet and with a ceiling eight feet high, forty persons were normally confined. Numerous prisoners at the Fleet died naked and in chains, and at all three prisons the gifts of the charitable for the relief of prisoners usually found their way into the officials' pockets. It is wholesome to remember that these "little Belsens" once existed in London, and that, as the authors point out, "the modern scrupulous control of accounts and conduct in public institutions, which seems sometimes so exaggerated, is nevertheless essential."

The care of the insane is still, in our own day, a painful and difficult problem. In 1816 (the year of Charlotte Brontes birth—remember Mrs. Rochester) it was scarcely a problem at all, save for the well- to-do, since pauper lunatics could be confined in private mad-houses which were eager to receive them and obtain the nine shillings a week per head which was allowed by the parish. These private bedlams were required by law to be inspected only once a year, and, since even these inspections were cursory, there were abominable abuses. The case of the White House at Bethnal Green was typical. Over- crowding, insufficiency of keepers, absence of all medical attention, bad food, brutality and filth all came miserably to light in the course of the enquiry, and it was on the strength of the findings of this 1827 Select Committee that Parliament brought all asylums for the first time under the control of the Home Secretary.

Still more horrifying is " The Case of the Tortured Children," as the authors call the 1832 enquiry into the conditions of children in factories. It was the evidence elicited by this committee which first shocked Lord Shaftesbury into his long fight for the emancipation of working children; and the enquiry itself was precipitated by an alarming discovery—that "as many people died before their twentieth year in districts where the factory system prevailed as before their fortieth year elsewhere." The reasons for this appalling juvenile death-rate were made painfully clear in the evidence which crippled, deformed and exhausted children gave before the committee. Four- teen, sixteen and eighteen-hour working days; brutal beatings for lateness in the mornings, beatings again towards the end of the day, when children could be kept awake and at work by no other means; conditions of cold and damp, depravity and danger ; and, recurring again and again until it seems even the worst of all these miseries, cruel insufficiency of sleep. The Industrial Revolution has no uglier nor more pitiful chronicle than this, and it would be hard to match its misery even in the Middle Ages.

The last enquiry in this collection is that of 1837 into the transporta- tion of criminals. The horrors of the hulks, the brutality of the penal settlements in Australia and the consequent degradation of the convicts make up a tale so loathsome that Magwitch appears by comparison a fine gentleman. Some of the details are almost too terrible for print, yet it is well to know them in an age as much concerned as ours with the treatment of the criminal. " An age," the authors observe in conclusion, " in which such cruelties existed was also an age with enough courage to make fearless investigation of them." A public conscience develops slowly ; the moral is obvious. This gruesome book should be a spur to vigilance.