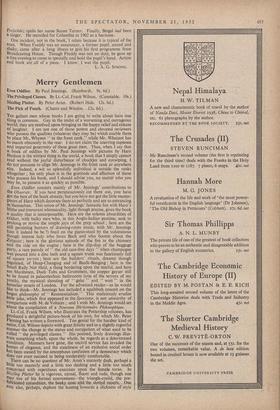 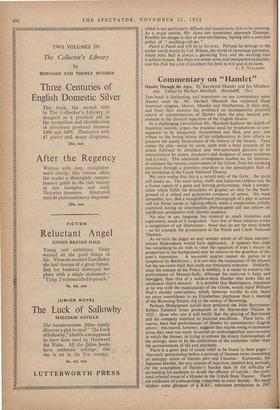 THE gallant men whose books I am going to write about have one thing in common. Gay in the midst of a worsening and outrageous world, they are resolved upon bringing us the happy relief and release of laughter. I am not one of those potent and elevated reviewers Who possess the qualities (whatever they may be) which enable them to place Mr.-Whynot " in the front rank," while Mr. Whatnot has to march obscurely in the rear. I do not claim the unerring sapience and impartial generosity of these great men. Thus, when I say that a book of oddlies by Mr. Paul Jennings with pictures by Haro Hodson is the wittiest thing in the world, a book that I simply cannot read without the joyful disturbance of chuclsjes and eyewiping, I do not presume to align Mr. Jennings in the front rank or anywhere else. Indeed, a wit so splendidly individual is outside the ranks altogether ; his only place is in the gratitude and affection of those Who possess his book, and I should advise you, no matter who you may be, to possess it as quickly as possible.

Even Oddlier consists mainly of Mr. Jennings' contributions to the Observer. If you have perspicaciously cut them out, you have got the best of the book already, but you have not got the little master- Pieces of Haro which decorate them so perfectly and are so entrancing in themselves. This union of Mr. Jennings' fantastic fun with Haro's blithe and irreverent whimsicality, light though precise, gives the book quality that is unsurpassable. Here are the solemn absurdities of cricket, with bulky men 'who, in this Anglo-Indian pastime, seek to Prolong or revive the simple joys of the prep school ; here are the still persisting horrors of drawing-room music, with Mr. Jennings (can it indeed be he ?) fixed on the piano-stool by the voluminous though intense lady .who loves Bach and who booms about the Zeitgeist ; here is the glorious episode of the fire in the chimney and the ride on the engine ; here is the slip-slap of the baggage Party, a rare parody of " the old care-free days " when champagne Was poured into a zinc bath and a square trunk was facetiously full of square yo-yos ; here are the builders' rituals, dreamy though regulated, of Heap-Changing and of Baulk-Banging ; here is the Small Rally Not Held, a thing bordering upon the tearful, and here are Marshmen, Duck Tubs and Grommets, the copper geyser still to be found in palaeotechnic bathrooms (one of the terrors of my Youth), the mystical, shouting of " gake " and " woit " in the homelier streets of London. For the advanced reader—as he would like to think—Mr. Jennings has included a squibbish conceit on the bogus philosophy of " Resistentialism." This maliciously erudite little joke, which first appeared in the Spectator, is not unworthy of comparison with M. de Voltaire ; and I wish Mr. Jennings would set about the compilation of a Nouveau Dictionnaire Philosophique. Lt.-Col. Frank Wilson, who illustrates the Pottership volumes, has Produced a delightful picture-book of his own, for which Mr. Peter Fleming has written a foreword. Too genial for the harsher kind of satire, Col. Wilson depicts with great felicity and in a slightly regretful Manner the change in the status and occupation of what used to be called " the privileged classes." His pointed, lively drawings illus- trate something which, upon the whole, he regards as a deteriorated Condition. Manners have gone, the uncivil service has invaded the homes of elegance, and the stateliness of an exclusive social order has been ousted by the amorphous confusion of a democracy which does not even succeed in being moderately comfortable. There can be no question of Mr. Arno's masterly dash, perhapi a little too masterly and a little too dashing and a little too much concerned with repetitious exercises upon the female torso. In Sizzling Platter he is vigorous, carnal, fluent and rude, though one tire of his formal conventions—the triangle-eyelid, the pre- Iabricated rot undities, the beaky nose and the slotted mouth. One &nay also, perhaps, deplore the leaning towards a slickness of style which is not particularly difficult and occasionally fails to be amusing. As a social satirist, Mr. Arno can sometimes approach Daumier. Possibly his danger is that of over-confidence, lapsing into a care-free policy of " anything-will-do."

Punch is Punch and will be so for ever. Perhaps he belongs to the earlier world shown by Col. Wilson, the world of parsonage patriotics, where John Bull is always a glowering Tory and the working man is seldom honest. But there are newer notes and unexpected audacities, and this Pick has a lot of excellent fun both in text and in pictures.