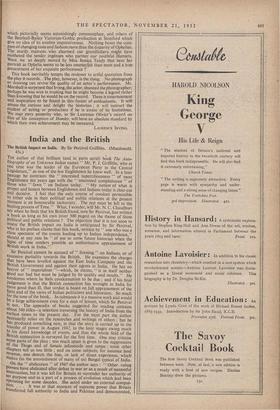 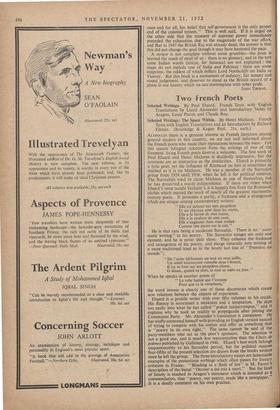 India and the British

The British Impact on India. By Sir Percival Griffiths. (Macdonald. 45s.) THE author of that brilliant (and in parts acrid) book The Auto- biography of an Unknown Indian names " Mr. P. J. Griffiths, who at one time was the leader of the European Party in the Central Legislature," as one of the few Englishmen he knew well. In a later Passage he contrasts the " interested superciliousness " of most Englishmen ten years ago with the " interested complaisance-" of those who " fawn " on Indians today. " My notion of what is proper and honest between Englishmen and Indians today is clear-cut and decisive. I feel that the only course of conduct permissible to either side in their political and public relations at the present moment is an honourable taciturnity. The rest must be left to the healing process of Time." What, I wonder, will Mr. N. C. Chaudhuri say when he finds that his British friend, now Sir Percival, has written a book as long as his own (over 500 pages) on the theme of those Political and public relations ? The objection that it is too soon to assess the British impact on India is anticipated by Sir Percival, Who in his preface claims that this book, written by " one who was a close spectator of the events leading up to Indian independence," should at any rate be " of use to some future historian when the lapse of time renders possible an authoritative appraisement of British work in India."

Sir Percival cannot be accused of " fawning " on Indians, or of excessive partiality towards the British. He examines the charges that have been levelled against the East India Company and the British Government and against their agents in India. He has no horror of " imperialism "—which, he claims, " is in itself neither good nor bad but must be judged by its quality and results." He condemns where he feels condemnation to be due ; and if his final Judgement is that the British connection has wrought in India far more good than ill, that verdict is based on full appraisement of the facts and of the views of Indian politicians and historians. So much for the tone of the book. In substance it is a massive work and would be a large achievement even for a man of leisure, which Sir Percival is not. The appendix of books suggested for reading contains about 340 titles—a selection traversing the history of India from the earliest times to the present day. For the most part the author necessarily relies on the researches and writings of others ; but he has produced something new, in that the story is carried up to the transfer of power in August 1947, in the later stages owing much to his direct knowledge of events, and thus the whole field of the British connection is surveyed for the first time. One may criticise some parts of the plan : too much space is given to the suppression of the Thugs and of female infanticide and suttee : some other chapters tell us too little ; and on some subjects, for instance land revenue, one detects the bias, or lack of direct experience, which makes (to the astonishment of many of us) Bengal typical or India.

On the " abdication " of 1947 the author says : " Other. ruling Powers have abdicated after defeat in war or as a result of successful insurrection, but it was left for Britain to surrender her authority -of set purpose and as a part of a process of evolution which had been operating for some decades. She acted under no external compul- sion.. . It was at that moment of supreme power that Britain transferred full authority to India and Pakistan and demonstrated,

once and for all, her belief that self-government is the only proper cnd of the colonial system." This is well said. If it is urged on the other side that the moment of supreme power immediately preceded the exhaustion due to the magnitude of the war effort, and that in 1947 the British Raj was already dead, the answer is that this did not change the goal though it may have hastened the pace.

A review is not complete without some grumbles—the price is beyond the reach of mast of us : there is no glossary, and in the text some Indian words (anicut, for instance) are not explained : the maps do not include one of India and Pakistan : there are some misprints, the oddest of which inflicts Lord Northcliffe on India as Viceroy. But this book is a monument of industry, fair temper and sound judgement, and deserves to stand as the British record of a phase in our history which we can contemplate with sober pride.