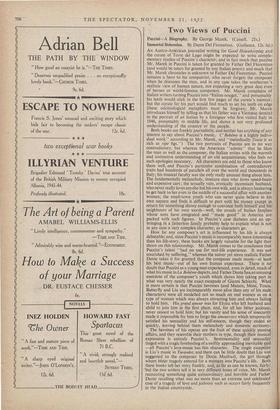 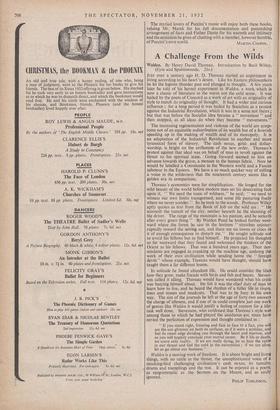 AN Austro-American journalist writing for Good Housekeeping and the curate of Torre del Lago might be expected to write comple- mentary studies of Puccini's character; and in fact much that puzzles Mr. Marek in Puccini is taken for granted by Father Del Fiorentino (and would be taken for granted by any Italian priest); and much that Mr. Marek chronicles is unknown to Father Del Fiorentino. Puccini remains a hero to his compatriot, who never forgets the composer when he discusses the man, and in any case takes the southerner's realistic view of human nature, not expecting a very great deal even of heroes or world-famous composers. Mr. Marek complains of Italian writers turning Puccini into "Italian nougat," and presumably his teeth would stick in the first few pages of the curate's memoir; but the curate for his part would find much to set his teeth on edge (these odontological metaphors must be forgiven; Mr. Marek introduces himself by telling us that his father was a Viennese dentist) in the portrait of an Italian by a foreigner who first visited Italy in 1946, presumably in middle life, and shows a not very profound understanding of the country or the people.

Both books are frankly journalistic, and neither has anything of any interest to say about Puccini's music. ("Boheme is a highly indivi- dual work" according to Mr. Marek, and "melodically Tosca is as rich as ripe figs.") The two portraits. of Puccini are in no way contradictory, but whereas the American "admits" that he likes the man as well as the composer, the Italian writes with the warmth and instinctive understanding of an old acquaintance, who feels no such apologies necessary. All characters are odd to those who know them well, and Puccini's particular combination of contradictory traits had hundreds of parallels all over the world and thousands in Italy; his musical faculty was the only really unusual thing about him. The fundamentally melancholy, insecure man who loves speed-boats and expensive cars ; the sexually vain, erotically inconstant husband, who never really loves anyone but his own wife, and is always hankering to get back to her even in the middle of a successful affair with another woman; the small-town youth who can never quite believe in his own success and finds it difficult to part with his money except in return for something showy enough to convince both himself and his neighbours of his own worth—well, the annals of Italian families whose sons have emigrated and "made good" in America are packed with such figures. In Puccini's case diabetes and an up- bringing in a fatherless family probably help to explain what is not in any case a very complex character, as characters go.

How far any composer's art is influenced by his life is always debatable; and, since Puccini's music is incomparably more interesting than his life-story, these books are largely valuable for the light they throw on this relationship. Mr. Marek comes to the conclusion that Puccini's talent "had no use for real-life experience. It was not nourished by suffering," whereas the naiver yet More realistic Father Dante takes it for granted that the composer made music—at least his best music—out of his own human experience. There is no doubt that Puccini as a young man experienced, even in detail, much of what his music in La Boketne depicts, and Father Dante has, an amusing anecdote of the composer's youth which shows him taking part in what was very nearly the exact escapade of Gianni Schicchi. What is more certain is that Puccini heroines (and Manon, Mimi, Tosca, Butterfly' and Liu are incomparably more alive than any of his male characters) were all modelled not so much on real women as on a type of woman which was always attracting him and always failing to hold him. His grand amour was for Elvira who left husband and child to join him in the first place, and, for all her bitter jealousy, never ceased to hold him; but his vanity and his sense of insecurity made it impossible for him to forgo the amourettes which temporarily satisfied his sensuality and his self-esteem, though they ended so quickly, leaving behind them melancholy and domestic acrimony.

The heroines of his operas are the fruit of these quickly passing affairs, and they resemble their mothers in type, though their musical expression is entirely Puccini's. Sentimentality and sensuality tinged with a tragic foreboding ofa swiftly approaching inevitable end —all Puccini's love-music has this character. The single exception is Liu's music in Turandot, and there can be little doubt that Liu was suggested to the composer by Doria Manfredi, the girl through whom bitter tragedy entered for a moment into Puccini's life. Boils these books tell her story frankly, and, as far as can be known,fairly; 'but the two writers tell it in very different tones of voice, Mr. Marek recounting something quite extraordinary and horrible and Father Dante recalling what was no more than an extreme and celebrated case of a tragedy of love and jealousy such as occurs fairly frequently in the Italian countryside.

The myriad lovers of,Puccini's music will enjoy both these books, valuing Mr. Marek for his full documentation and painstaking arrangement of facts and Father Dante for his warmth and intimacy and the sensation he gives of chatting with a member, however humble,