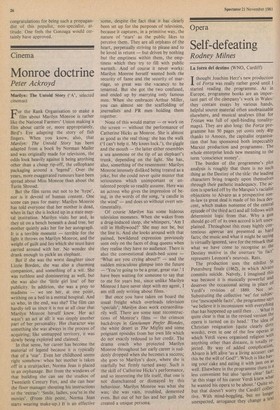 Marilyn: The Untold Story ('A', selected cinemas) Er or the Rank Organisation to make a film about Marilyn Monroe is rather like the National Farmers' Union making a film about cattle or, more appropriately, Bird's Eye adapting the story of fish fingers. When you know, also, that Marilyn: The Untold Story has been adapted from a book by Norman Mailer and was originally made for television, the odds look heavily against it being anything other than a cheap rip-off, the cellophane packaging around a 'legend'. Over the years, more exaggerated rumours have been spread about Miss Monroe than about the Turin Shroud.

But the film turns out not to be 'hype', nor is it devoid of human content. One scene can pass for many: Marilyn Monroe has told everyone that her mother is dead, when in fact she is locked up in a state mental institution. Marilyn visits her and, as they sit on a bench beneath a dead tree, her mother quietly asks her for her autograph. It is a terrible moment — terrible for the light it throws on Marilyn Monroe, and the weight of guilt and lies which she must have carried around with her. No wonder she drank enough to pickle an elephant.

But if she was the worst daughter since Lizzie Borden, she was also a charming companion, and something of a wit. She was ruthless and domineering as well, but she was also the 'little girl lost' of her publicity. In addition, she was a prey to madness — we see her, at one point, writhing on a bed in a mental hospital. And so who, in the end, was she? The film can hardly tell us since it is not at all clear that Marilyn Monroe herself knew. Her act wasn't an act at all: it was simply another part of her personality. Her character was something she was always in the process of acquiring; like unmapped territory, it was slowly being explored and claimed.

In that sense, her career has become the material of legend because it is typically that of a 'star'. Even her childhood seems right somehow: when her mother is taken off in a straitjacket, Norma Jean is placed in an orphanage. But from the windows of that building she can see the studios of Twentieth Century Fox, and she can hear the floor manager shouting his instructions to the 'extras': 'Smile, ladies, you're in the movies'. (From this point, Norma Jean starts wearing make-up.) It is an effective scene, despite the fact that it has clearly been set up for the purposes of television, because it captures, in a primitive way, the nature of 'stars' as the public likes to perceive them. They are all orphans of the heart, perpetually striving to please and to be loved in return — but driven by nothing but the emptiness within them, the emp tiness which they try to fill with public warmth. And of course it never works: Marilyn Monroe herself wanted both the security of fame and the security of mar riage, so great was the vacancy to be tenanted. But she got the two confused, and ended up by marrying only famous men. When she embraces Arthur Miller, you can almost see the scaffolding of journalists and PR men holding them together.

None of this would matter — or work on the screen — without the performance of Catherine Hicks as Monroe. She is almost as good as the real thing: she has the walk CI can't help it. My knees lock.'), the giggle and the mouth — the latter either resembles a sea anemone or the tip of an elephant's trunk, depending on the light. She has, also, something of the resentment: Marilyn Monroe intensely disliked being treated as a joke, but she could never quite muster that seriousness which unimportant or untalented people so readily assume. Here was an actress who gives the impression of being, in the words of the song, 'a candle in the wind' — and does so without overt sentimentality.

Of course Marilyn has some hideous television moments. When she wakes from a drug-induced sleep, she whimpers, 'Am I still in Hollywood?' She may not be, but the line is. And she looks around with that pained, bewildered expression previously seen only on the faces of drag queens when they realise they have no audience. There is also the conventional death-bed scene -'What are you crying about?' — and the sudden miraculous glimpse into the future — 'You're going to be a great, great star.' I have been waiting for someone to say that to me for years but, since unlike Marilyn Monroe I have never slept with my agent, I am still only writing about films.

But once you have taken on board the usual freight which overloads television 'specials', Marilyn does work extraordinarily well. There are some neat reconstructions of Monroe's films — the crimson backdrops in Gentlemen Prefer Blondes, the white desert in The Misfits and some poignant episodes from her own life which do not exactly redound to her credit. The drama coach who protected Marilyn Monroe throughout her early career is suddenly dropped when she becomes a success; she goes to Marilyn's door, where she is tearfully but firmly turned away. Such is the skill of Catherine Hicks's performance, and so interesting the life itself, that one is not disenchanted or dismayed by this behaviour. Marilyn Monroe was what she was; she was vain, troubled, demented even. But out of her lies and her guilt she created a unique persona.