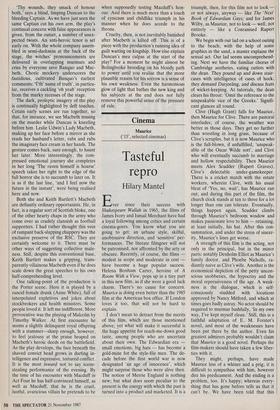 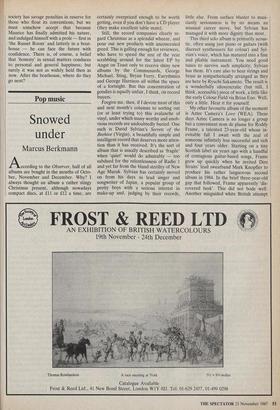 Ever since their success with Shakespeare Wallah in 1965, the films of James Ivory and Ismail Merchant have had a loyal following among critics and certain cinema-goers. You know what you are going to get: an urbane style, skilful, unobtrusive direction, and 'sensitive' per- formances. The literate filmgoer will not be patronised, nor affronted by the arty or obscure. Recently, of course, the films — modest in scope and moderate in cost — have become a huge popular success. Helena Bonham Carter, heroine of A Room With a View, pops up in a tiny part in this new film, as if she were a good luck charm. There's no cause for concern. Maurice is doing even better than the 1985 film at the American box office. If London loves it too, that will not be hard to explain.

I don't mean to detract from the merits of this film, which are those mentioned above; yet what will make it successful is the huge appetite for reach-me-down good taste, among people who are uncertain about their own. The Edwardian era — small emotions, big hats — has become a gold-mine for the style-file men. The de- cade before the first world war is now designated 'an age of innocence', which might surprise those who were alive then. The notion of Merrie England is nothing new; but what does seem peculiar to the present is the energy with which the past is turned into a product and marketed. It is a triumph, then, for this film not to look — or not always, anyway — like The 'Next' Book of Edwardian Gays; and for James Wilby, as Maurice, not to look — well, not entirely — like a Conranised Rupert Brooke.

We begin with our lad on a school outing to the beach; with the help of some graphics in the sand, a master explains the sexual act. Our lad seems uncomprehend- ing. Next we have the familiar chorus of Cambridge aesthetes, eating cutlets with the dean. They pound up and down stair- cases with intelligence of cases of hock; they demand Darjeeling, and discuss feats of wicket-keeping. At tutorials, the dean clears his throat: 'Omit the reference to the unspeakable vice of the Greeks.' Signifi- cant glances all round.

Clive (Hugh Grant) falls for Maurice, then Maurice for Clive. There are pastoral interludes; of course, the weather was better in those days. They get no further than wrestling in long grass, because of Clive's scruples, but it is now Maurice who is the full-blown, if unfulfilled, 'unspeak- able of the Oscar Wilde sort', and Clive who will eventually succumb to marriage and hollow respectability. Then Maurice meets Alex Scudder (Rupert Graves), Clive's delectable under-gamekeeper. There is a cricket match with the estate workers, wherein Clive, with his usual bleat of 'Yes, no, wait', has Maurice run out; and during this part of the film, the church clock stands at ten to three for a lot longer than one can tolerate. Eventually, things happen again. Scudder climbs through Maurice's bedroom window and makes passionate love to him — retaining, at least initially, his hat. After this con- summation, and under the stress of sincer- ity, Maurice's lines get worse.

A strength of this film is the acting, not only in the principal, but in the minor parts: notably Denholm Elliot as Maurice's family doctor, and Phoebe Nicholls, ra- diantly naive as Clive's wife. Another is the economical depiction of the petty uncon- scious snobberies, the hypocrisy and the moral repressiveness of the age. A weak- ness is the dialogue, which is self- consciously studded with locutions approved by Nancy Mitford, and which at times goes badly astray. No actor should be required to murmur bashfully, 'In my own way, I've kept myself clean.' Still, this is a faithful adaptation of E. M. Forster's novel, and most of the weaknesses have been put there by the author. Even his greatest admirers probably wouldn't claim that Maurice is a good novel. Perhaps the film-makers should have taken a few liber- ties with it.

They might, perhaps, have made Maurice less of a whiner and a prig; it is difficult to sympathise with him, however dire his predicament. And the ending is a problem, too. It's happy; whereas every- thing that has gone before tells us that it can't be. We have been told that this society has savage penalties in reserve for those who flout its conventions; but we must somehow accept that because Maurice has finally admitted his nature, and indulged himself with a prole — first in 'the Russet Room' and latterly in a boat- house — he can face the future with confidence. There is, of course, a belief that 'honesty' in sexual matters conduces to personal and general happiness; but surely it was not as widely held then as now. After the boathouse, where do they go next?