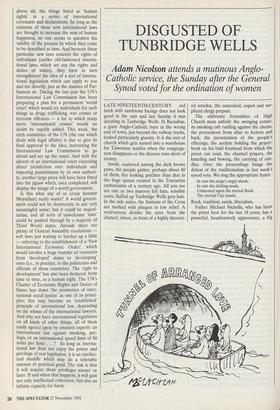 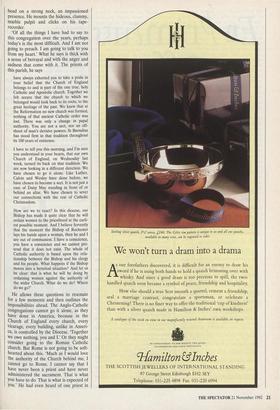 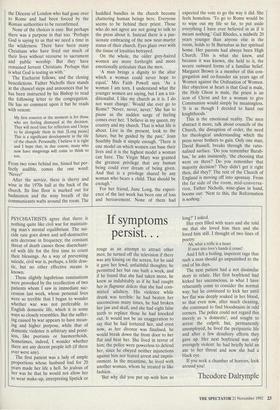 Catholic service, the Sunday after the General Synod voted for the ordination of women

LATE-NINETEENTH-CENTURY red brick with sandstone facings does not look good in the rain and last Sunday it was drizzling in Tunbridge Wells. St Barnabas, a giant Anglo-Catholic barn at the wrong end of town, just beyond the railway tracks, looked particularly gloomy. It is the sort of church which gets turned into a warehouse for Taiwanese textiles when the congrega- tion disappears or the diocese runs short of money.

Inside, scattered among the dark brown pews, the people gather, perhaps about 80 of them, but looking patchier than that in the huge spaces created in the Tractarian enthusiasms of a century ago. All you see are one or two maroon felt hats, sensible coats, fluffed up Tunbridge Wells grey hair. In the side aisles, the Stations of the Cross are marked with plaques in low relief. A rood-screen divides the nave from the chancel, where, in front of a highly decorat- ed reredos, the cassocked, coped and sur- pliced clergy prepare.

The elaborate formalities of High Church mass unfold: the swinging censer, its smoking orb rustling against the chains, the processions from altar to lectern and back, the presentation of the people's offerings, the acolyte holding the prayer- book on his bald forehead from which the priest can read, the chanted prayers, the kneeling and bowing, the carrying of can- dles. Over the proceedings hangs the defeat of the traditionalists in last week's synod vote. We sing the appropriate hymn:

Unharmed upon the eternal Rock The eternal City stands.

Father Michael Nicholls, who has been the priest here for the last 18 years, has a powerful, headmasterly appearance, a big head on a strong neck, an impassioned presence. He mounts the hideous, clammy, marble pulpit and clicks on his tape- recorder.

`Of all the things I have had to say to this congregation over the years, perhaps today's is the most difficult. And I am not going to preach. I am going to talk to you from my heart.' What he says is thick with a sense of betrayal and with the anger and sadness that come with it. The priests of this parish, he says

have always exhorted you to take a pride in your belief that the Church of England belongs to and is part of the one true, holy Catholic and Apostolic church. Together we felt secure that the church to which we belonged would look back to its roots, to the great heritage of the past. We knew that at the Reformation no new church was formed, nothing of that ancient Catholic order was lost. There was only a change in papal authority. You are not a sect, nor an off- shoot of man's derisive powers. St Barnabas has stood firm in that tradition throughout its 100 years of existence.

I have to tell you this morning, and I'm sure you understand in your hearts, that our own Church of England, on Wednesday last week, turned its back on that tradition. We are now looking in a different direction. We have chosen to go it alone. Like Luther, Calvin and Wesley have done before, we have chosen to become a sect. It is not just a case of Daisy May standing in front of or behind an altar. We have chosen to sever our connections with the rest of Catholic Christendom.

How are we to react? In this diocese, our Bishop has made it quite clear that he will ordain women to the priesthood at the earli- est possible moment. And I believe fervently that the moment the Bishop of Rochester lays his hands upon a woman, then he and I are out of communion. I have a conscience, you have a conscience and we cannot pre- tend that it does not exist. The whole of Catholic authority is based upon the rela- tionship between the Bishop and his clergy and his people. What happens if the Bishop moves into a heretical situation? And let us be clear: that is what he will be doing by ordaining women against the authority of the wider Church. What do we do? Where do we go?'

He allows these questions to resonate for a few moments and then outlines the Impossibilities ahead. The Anglo-Catholic congregations cannot go it alone, as they have done in America, because in the Church of England every church, every vicarage, every building, unlike in Ameri- ca, is controlled by the Diocese. 'Together we own nothing, you and I.' Or they might consider going to the Roman Catholic church. But Rome is not going to be soft- hearted about this. 'Much as I would love the authority of the Church behind me, I cannot go to Rome. I cannot say that I have never been a priest and have never administered the sacrament. That is what you have to do. That is what is expected of you.' He had even heard of one priest in

the Diocese of London who had gone over to Rome and had been forced by the Roman authorities to be reconfirmed.

None of the choices is easy. But perhaps there was a purpose in that too. 'Perhaps God is saying to us that we need a time in the wilderness. There have been many Christians who have lived out much of their lives without recourse to sacrament and public worship. But they have remained fervent Christians. Perhaps that is what God is testing us with.'

The Eucharist follows, and the closing benedictions. Father Nicholls then stands at the chancel steps and announces that he has been instructed by his Bishop to read the following letter to the congregation. He has no comment upon it but he reads with venom:

My first concern at the moment is for those who are feeling dismayed at the decision. They will need time for reflection and I hope to be alongside them in that. [Long pause] This is a significant development in the life of the church. Personally, I believe it is right and I hope that, in due course, many who now have misgivings will come to think so too.

From two rows behind me, hissed but per- fectly audible, comes the one word: `Never!'

After the service, there is sherry and wine in the 1970s hall at the back of the church. Its lino floor is marked out for badminton and the winy breath of the communicants wafts around the room. The huddled bundles in the church become chattering human beings here. Everyone seems to be behind their priest. Those who do not agree are not going to talk to the press about it. Instead there is a pas- sionate embracing of the new near-martyr status of their church. Eyes glaze over with the tissue of loyalties betrayed.

On the whole, the older grey-haired women are more forthright and more emotionally articulate than the men.

`A man brings a dignity to the altar which a woman could never hope to equal,' Mrs Faith Powell says. 'As a woman I am torn. I understand what the younger women are saying, but I am a tra- ditionalist. I like my church as it is. I do not want change.' Would she ever go to Rome? 'Never, never, never.' She has to pause as the sudden surge of feeling comes over her. 'I believe in my queen, my country and my church. That is what life is about. Live in the present, look to the future, but be guided by the past.' Joan Southby finds it simple enough. 'There is one model on which women can base their lives and it is the highest model a woman can have. The Virgin Mary was granted the greatest privilege that any human being could ever dream of being given. And that is a privilege shared by any woman who bears a child. That should be enough.'

For her friend, June Long, the experi- ence of the last week has been one of loss and bereavement. None of them had expected the vote to go the way it did. She feels homeless. 'To go to Rome would be to wipe out my life so far, to put aside everything I have ever believed in as if it meant nothing.' Gail Rhodes, a midwife 20 years younger than anyone else in the room, holds to St Barnabas as her spiritual home. Her parents had always been High Church. This is what she knew, and because it was known, she held to it, the secure outward forms of a familiar belief. Margaret Brown is a member of this con- gregation and co-founder six years ago of Women against the Ordination of Women. Her objection at heart is that God is male, the Holy Ghost is male, the priest is an icon of Christ and for a woman to give Communion would simply be meaningless. `It is as though I decided to hand out knighthoods.'

This is the emotional reality. The men abstract it more, talk about councils of the Church, the disruption of order, the need for theological understanding which the press never bothers to gain. Only one man, David Russell, breaks through the ratio- nalised surface. `Do you remember Barab- bas,' he asks insistently, 'the choosing that went on there? Do you remember that majority decision? They didn't get it right then, did they?' The rest of the Church of England is moving off into apostasy. From the far side of the room, mid-conversa- tion, Father Nicholls, wine-glass in hand, booms out: 'Next to this, the Reformation is nothing.'