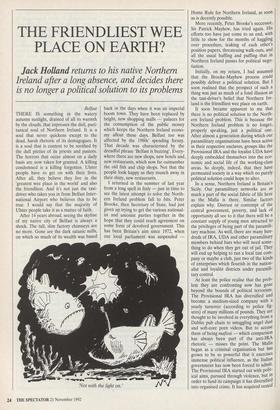 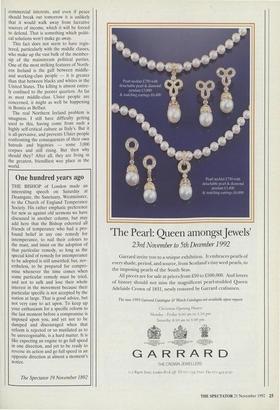 THE FRIENDLIEST WEE PLACE ON EARTH?

Jack Holland returns to his native Northern Ireland after a long absence, and decides there is no longer a political solution to its problems

Belfast THERE IS something in the watery autumn sunlight, drained of all its warmth by the clouds, that expresses the dull, puri- tanical soul of Northern Ireland. It is a soul that never quickens except to the dead, harsh rhetoric of its demagogues. It is a soul that is content to be soothed by the dull pieties of its priests and pastors. The horrors that occur almost on a daily basis are now taken for granted. A killing condemned is a killing forgotten. Ulster people have to get on with their lives. After all, they believe they live in the `greatest wee place in the world' and also the friendliest. And it's not just the taxi- driver who takes you in from Belfast Inter- national Airport who believes this to be true. I would say that the majority of Ulster people take it as a matter of faith.

After 14 years abroad, seeing the skyline of my native city of Belfast is always a shock. The tall, slim factory chimneys are no more. Gone are the dark satanic mills, on which so much of its wealth was based back in the days when it was an imperial boom town. They have been replaced by bright, new shopping malls — palaces for the consumption of the public money which keeps the Northern Ireland econo- my afloat these days. Belfast too was affected by the 1980s' spending frenzy. That decade was characterised by the dreadful phrase 'Belfast is buzzing'. Every- where there are new shops, new hotels and, new restaurants, which now far outnumber the old fish and chip shops. Not that the people look happy as they munch away in their shiny, new restaurants.

I returned in the summer of last year from a long spell in Italy — just in time to see the latest attempt to solve the North- ern Ireland problem fall to bits. Peter Brooke, then Secretary of State, had just given up trying to get the various national- ist and unionist parties together in the hope that they could reach agreement on some form of devolved government. This has been Britain's aim since 1972, when our local parliament was suspended — Home Rule for Northern Ireland, as soon as is decently possible.

More recently, Peter Brooke's successor, Sir Patrick Mayhew, has tried again. His efforts too have just come to an end, with little to show for the months of haggling over procedure, leaking of each other's position papers, threatening walk-outs, and all the usual huffing and puffing that in Northern Ireland passes for political nego- tiation.

Initially, on my return, I had assumed that the Brooke-Mayhew process could possibly deliver a political solution. But I soon realised that the prospect of such a thing was just as much of a fond illusion as the taxi-driver's belief that Northern Ire- land is the friendliest wee place on earth.

It soon became apparent to me that there is no political solution to the North- ern Ireland problem. This is because the Northern Ireland problem is no longer, properly speaking, just a political one. After almost a generation during which our paramilitary organisations have been active in their respective enclaves, groups like the Provisional IRA and the loyalist UDA have deeply embedded themselves into the eco- nomic and social life of the working-class areas. So deeply, indeed, that they have permeated society in a way which no purely political solution could hope to alter.

In a sense, Northern Ireland is Britain's Sicily. Our paramilitary networks are as much a part of the social fabric of life here as the Mafia is there. Similar factors explain why. Distrust or contempt of the central government, poverty, and lack of opportunity all see to it that there will be a constant supply of young men attracted to the privileges of being part of the paramili- tary machine. As well, there are many hun- dreds of IRA, UDA and other paramilitary members behind bars who will need some- thing to do when they get out of jail. They will end up helping to run a local taxi com- pany or maybe a club, just two of the kinds of enterprises which flourish in the nation- alist and loyalist districts under paramili- tary control. At least the police realise that the prob- lem they are confronting now has gone beyond the bounds of political terrorism. The Provisional IRA has diversified and become a medium-sized company with a yearly turnover (according to police fig- ures) of many millions of pounds. They are thought to be involved in everything from a Dublin pub chain to smuggling angel dust and soft-core porn videos. But to accuse them of being mafiosi — which comparison has always been part of the anti-IRA rhetoric — misses the point. The Mafia began as a criminal organisation but has grown to be so powerful that it exercises immense political influence, as the Italian government has now been forced to admit. The Provisional IRA started out with polit- ical aims, pursued through violence, but in order to fund its campaign it has diversified into organised crime. It has acquired vested

commercial interests, and even if peace should break out tomorrow it is unlikely that it would walk away from lucrative sources of income, which it will be forced to defend. That is something which politi- cal solutions won't make go away.

This fact does not seem to have regis- tered, particularly with the middle classes, who make up the vast bulk of the member- sip of the mainstream political parties. One of the most striking features of North- ern Ireland is the gulf between middle- and working-class people — it is greater than that between blacks and whites in the United States. The killing is almost entire- ly confined to the poorer quarters. As far as most middle-class Ulster people are concerned, it might as well be happening in Bosnia as Belfast.

The real Northern Ireland problem is smugness. I still have difficulty getting used to this, having come from such a highly self-critical culture as Italy's. But it is all-pervasive, and prevents Ulster people confronting the consequences of their own hatreds and bigotries — some 3,000 corpses and still rising. But then why should they? After all, they are living in the greatest, friendliest wee place in the world.