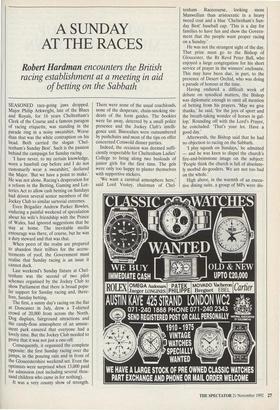 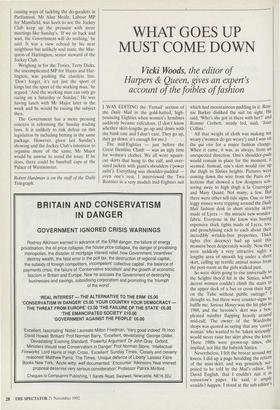 A SUNDAY AT THE RACES

Robert Hardman encounters the British racing establishment at a meeting in aid of betting on the Sabbath SEASONED race-going jaws dropped. Major Philip Arkwright, late of the Blues and Royals, for 16 years Cheltenham's Clerk of the Course and a famous paragon of racing etiquette, was standing in the parade ring in a noisy sweatshirt. Worse than that was the white contraption on his head. Both carried the slogan 'Chel- tenham's Sunday Best'. Such is the passion behind the campaign for Sunday racing. `I have never, to my certain knowledge, worn a baseball cap before and I do not customarily wear a sweatshirt,' declared the Major. 'But we have a point to make.' He was not alone. Racing's desperation for a reform in the Betting, Gaming and Lot- teries Act to allow cash betting on Sundays had driven several senior members of the Jockey Club to similar sartorial extremes. Even Brigadier Andrew Parker Bowles, enduring a painful weekend of speculation about his wife's friendship with the Prince of Wales, had ignored suggestions that he stay at home. The inevitable media entourage was there, of course, but he was a duty steward and that was that.

When peers of the realm are prepared to abandon their trilbies for the accou- trements of yoof, the Government must realise that Sunday racing is an issue it cannot duck.

Last weekend's Sunday fixture at Chel- tenham was the second of two pilot schemes organised by the Jockey Club to show Parliament that there is broad popu- lar support for Sunday racing and, there- fore, Sunday betting.

The first, a sunny day's racing on the flat at Doncaster in July, drew a T-shirted crowd of 20,000 from across the North. Dog displays, fairground attractions and the candy-floss atmosphere of an amuse- ment park ensured that everyone had a lovely time. But the Jockey Club needed to prove that it was not just a one-off.

Consequently, it organised the complete opposite: the first Sunday racing over the jumps, in the pouring rain and in front of the Gloucestershire weekend set. Even the optimists were surprised when 13,000 paid for admission (not including several thou- sand children who came in for nothing).

It was a very county show of strength. There were none of the usual coachloads, none of the desperate, chain-smoking stu- dents of the form guides. The bookies were far away, deterred by a small police presence and the Jockey Club's intelli- gence unit. Binoculars were outnumbered by pushchairs and most of the tips on offer concerned Cotswold dinner parties. Indeed, the occasion was deemed suffi- ciently respectable for Cheltenham Ladies' College to bring along two busloads of junior girls for the first time. The gels were only too happy to plaster themselves with supportive stickers.

`We want a carnival atmosphere here,' said Lord Vestey, chairman of Chel- tenham Racecourse, looking more Maxwellian than aristocratic in a heavy tweed coat and a blue 'Cheltenham's Sun- day Best' baseball cap. 'This is a day for families to have fun and show the Govern- ment that the people want proper racing on a Sunday.'

He was not the strangest sight of the day. That prize must go to the Bishop of Gloucester, the Rt Revd Peter Ball, who enjoyed a large congregation for his short service of prayer in the winners' enclosure. This may have been due, in part, to the presence of Desert Orchid, who was doing a parade of honour at the time.

Having endured a difficult week of debate on synodical matters, the Bishop was diplomatic enough to omit all mention of betting from his prayers. 'May we give thanks,' he said, 'for the joys of sport and the breath-taking wonder of horses in gal- lop.' Rounding off with the Lord's Prayer, he concluded: 'That's your lot. Have a good day.'

Afterwards, the Bishop said that he had no objection to racing on the Sabbath.

'I play squash on Sundays,' he admitted — and he was keen to dispel the church's fire-and-brimstone image on the subject: `People think the church is full of absolute- ly morbid do-gooders. We are not too bad on the whole.'

High above, in the warmth of an execu- tive dining suite, a group of MPs were dis- cussing ways of tackling the do-gooders in Parliament. Mr Alan Meale, Labour MP for Mansfield, was keen to see the Jockey Club keep up the pressure with more meetings like Sunday's. 'If we sit back and wait, the Government will do nothing,' he said. It was a view echoed by his near neighbour but unlikely soul mate, the Mar- quess of Hartington, senior steward of the Jockey Club.

Weighing in for the Tories, Terry Dicks, the uncomplicated MP for Hayes and Har- lington, was pushing the classless line. 'Don't forget, it's not just the sport of kings but the sport of the working man,' he argued. 'And the working man can only go racing on a Saturday or Sunday.' He was having lunch with Mr Major later in the week and he would be raising the subject then.

The Government has a more pressing concern in reforming the Sunday trading laws. It is unlikely to risk defeat on this legislation by including betting in the same package. However, given last Sunday's showing and the Jockey Club's intention to organise more of the same, Mr Major would be unwise to avoid the issue. If he does, there could be baseball caps at the Palace of Westminster.

Robert Hardman is on the staff of the Daily Telegraph.