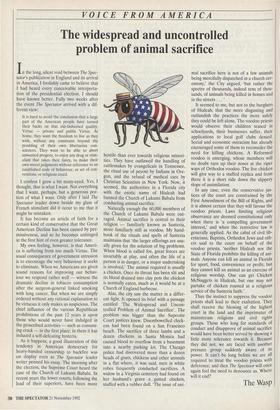 The widespread and uncontrolled problem of animal sacrifice

In the long, silent void between The Spec- tator's publication in England and its arrival in America, I foolishly came to believe that I had heard every conceivable interpreta- tion of the presidential election. I should have known better. Fully two weeks after the event The Spectator arrived with a dif- ferent view: It is hard to avoid the conclusion that a large part of the American people have turned their backs on that old-fashioned quality: Virtue — private and public Virtue. At home, they want the freedom to live as they wish, without any constraint beyond the prodding of their own libertarian con- sciences. They want to be able to abort unwanted progeny, to enjoy any drug or stim- ulant that takes their fancy, to make their own moral judgments without reference to an established code of behaviour, or set of con- ventions, or religious creed.

I confess I grew a bit misty-eyed. Yes, I thought, that is what I want. Not everything that I want, perhaps, but a generous por- tion of what I want. Only after I laid The Spectator leader down beside my glass of French stimulant did it occur to me that it might be mistaken.

It has become an article of faith for a certain kind of conservative that the Great American Decline has been caused by per- missiveness, and so he becomes unhinged at the first hint of even greater tolerance.

My own feeling, however, is that Ameri- ca is suffering from too much Virtue. The usual consequence of government intrusion is to encourage the very behaviour it seeks to eliminate. When we Americans are given sound reasons for improving our behav- iour we respond rather well — witness the dramatic decline in tobacco consumption after the surgeon-general linked smoking with lung cancer. But when we are simply ordered without any rational explanation to be virtuous it only makes us suspicious. The chief influence of the various Republican prohibitions of the past 12 years is upon those who would never have indulged in the proscribed activities — such as consum- ing crack — in the first place; in them it has induced a self-defeating hysteria.

As it happens, a good illustration of this tendency in American democracy for heavy-handed censorship to backfire was on display even as The Spectator leader writer penned his essay. The morning after the election, the Supreme Court heard the case of the Church of Lukumi Babalu. In recent years the lower courts, following the lead of their superiors, have been more

hostile than ever towards religious minori- ties. They have outlawed the handling of rattlesnakes by evangelicals in Tennessee, the ritual use of peyote by Indians in Ore- gon, and the refusal of medical care by Christian Scientists in New York. Now, it seemed, the authorities in a Florida city with the exotic name of Hialeah had banned the Church of Lukumi Babalu from conducting animal sacrifice.

Naturally enough the 60,000 members of the Church of Lukumi Babalu were out- raged. Animal sacrifice is central to their religion — familiarly known as Santeria, more familiarly still as voodoo. My hand- book of the rituals and spells of Santeria maintains that 'the larger offerings are usu- ally given for the solution of big problems. When blood is called for, great forces are invariably at play, and often the life of a person is in danger, or a major undertaking is involved.' The animal required is usually a chicken. Once its throat has been slit and its blood drained into clay pots the chicken is normally eaten, much as it would be at a Church of England barbecue.

Alas, the city saw the matter in a differ- ent light. It opened its brief with a passage entitled 'The Widespread and Uncon- trolled Problem of Animal Sacrifice'. The problem was bigger than the Supreme Court justices knew. Disembowelled chick- ens had been found on a San Francisco beach. The sacrifice of three lambs and a dozen chickens in Santa Monica had caused blood to overflow from a basement into a nearby parking lot. The Chicago police had discovered more than a dozen heads of goats, chickens and other animals in a flat where, it was said, men in white robes frequently conducted sacrifices. A widow in a Virginia cemetery had found on her husband's grave a gutted chicken, stuffed with a rubber doll. 'The issue of ani- mal sacrifice here is not of a few animals being mercifully dispatched in a church cer- emony,' the City argued, 'but rather the spectre of thousands, indeed tens of thou- sands, of animals being killed in homes and in the streets . . . '

It seemed to me, but not to the burghers of Hialeah, that the more disgusting and outlandish the practices the more safely they could be left alone. The voodoo priests would observe their children teased in schoolyards, their businesses suffer, their applications to local golf clubs denied. Social and economic ostracism has already encouraged some of them to reconsider the need for killing chickens. A Reformed voodoo is emerging, whose members will no doubt turn up their noses at the riper ways of Orthodox voodoo. The live chicken will give way to a stuffed replica and from there it is a short ride down the slippery slope of assimilation.

In any case, even the conservative jus- tices of the court are constrained by the First Amendment of the Bill of Rights, and it is almost certain that they will favour the voodoo priests. Laws limiting religious observance are deemed constitutional only when there is 'a compelling government interest,' and when the restrictive law is generally applied. As the cabal of civil lib- ertarians, Baptists, Orthodox Jews and oth- ers said to the court on behalf of the voodoo priests, 'neither Hialeah nor the State of Florida prohibits the killing of ani- mals. Anyone can kill an animal in Florida for sport, food, convenience or profit; but they cannot kill an animal as an exercise of religious worship. One can get Chicken McNuggets in Hialeah, but one may not partake of chicken roasted at a religious service of the Santeria faith.'

Thus the instinct to suppress the voodoo priests shall lead to their exaltation. They shall receive the blessing of the highest court in the land and the imprimatur of mainstream religions and civil rights groups. Those who long for standards of conduct and disapprove of animal sacrifice would have been better served by showing a little more tolerance towards it. Because they did not, we are faced with another pressure group suddenly aware of its power. It can't be long before we are all required to treat the voodoo priests with deference; and then The Spectator will once again feel the need to denounce us. Where will it end?