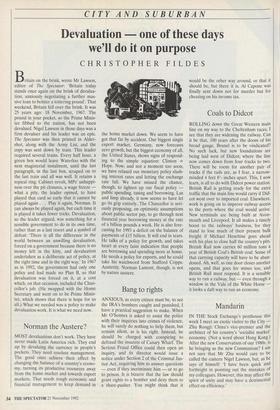 Devaluation one of these days we'll do it on purpose

Britain on the brink, wrote Mr Lawson, editor of The Spectator: 'Britain today stands once again on the brink of devalua- tion, anxiously negotiating a further mas- sive loan to bolster a tottering pound'. That weekend, Britain fell over the brink. It was 25 years ago: 18 November, 1967. The pound in your pocket, so the Prime Minis- ter fibbed to the nation, has not been devalued. Nigel Lawson in those days was a firm devaluer and his leader was an epic. The Spectator was then printed in Alder- shot, along with the Army List, and the copy was sent down by train. This leader required several trains. Every half hour, a green box would leave Waterloo with the next magisterial instalment, until the last paragraph, in the last box, scraped on to the last train and all was well. It retains a topical ring: Cabinet revolt, MPs' unhappi- ness over the pit closures, a wage freeze what a pity, the leader opined, to have played that card so early that it cannot be played again . . . Play it again, Norman. It can always be played again, but each time it is played it takes fewer tricks. Devaluation, so the leader argued, was something for a sensible government to do in its own time, rather than as a last resort and a symbol of defeat: 'There is all the difference in the world between an unwilling devaluation, forced on a government because there is no money left in the kitty, and devaluation undertaken as a deliberate act of policy, at the right time and in the right way.' In 1967 as in 1992, the government had only one policy and had made no Plan B, so that devaluation was forced on it, at a cost which, on that occasion, included the Chan- cellor's job. (He swapped with the Home Secretary and went on to be Prime Minis- ter, which shows that there is hope for us all.) What we needed was a policy to make devaluation work. It is what we need now.

MOST devaluations don't work. They have never made Latin America rich. They end up by devaluing the currency in people's pockets. They need resolute management. The good ones achieve their effect by changing the balance of a country's econo- my, turning its productive resources away from the home market and towards export markets. That needs tough economic and financial management to keep demand in the home market down. We seem to have got that far by accident. Our biggest single export market, Germany, now forecasts zero growth, but the biggest economy of all, the United States, shows signs of respond- ing to the simple equation: Clinton = Hope. Now, and not a moment too soon, we have relaxed our monetary policy slash- ing interest rates and letting the exchange rate fall. We have missed the chance, though, to tighten up our fiscal policy public spending, taxing and borrowing. Lax and limp already, it now seems to have let go its grip entirely., The Chancellor is seri- ously proposing, on optimistic assumptions about public sector pay, to go through next financial year borrowing money at the rate of a billion pounds a week. He is also fore- casting for 1993 a deficit on the balance of payments of £15 billion. It will end in tears. He talks of a policy for growth, and takes heart at every faint indication that people are borrowing and spending more at home. He needs a policy for exports, and he could take his watchword from Stafford Cripps: Austerity. Norman Lamont, though, is not by nature austere.

ANXIOUS, as every citizen must be, to see the IRA's bombers caught and punished, I have a practical suggestion to make. When Mr O'Semtex is asked to assist the police with their inquiries into crimes of violence, he will surely do nothing to help them, but remain silent, as is his right. Instead, he should be charged with conspiring to defraud the insurers of Canary Wharf. The Serious Fraud Office could then open an inquiry, and its director would issue a notice under Section 2 of the Criminal Jus- tice Act, requiring him to answer questions — even if they incriminate him — or to go to prison. It is bizarre that the law should grant rights to a bomber and deny them to a share-pusher. You might think that it would be the other way around, or that it should be, but there it is. Al Capone was finally sent down not for murder but for cheating on his income tax.

ROLLING down the Great Western main line on my way to the Cheltenham races, I see that they are widening the railway. Can it be that, 100 years after the doom of his broad gauge, Brunel is to be vindicated? No such luck, but new foundations are being laid west of Didcot, where the line now comes down from four tracks to two. There will be room for another pair of tracks if the rails are, as I fear, a narrow- minded 4 feet 8"2 inches apart. This, I now learn, is all to do with Didcot power station. British Rail is getting ready for the extra traffic that the main line would carry if Did- cot went over to imported coal. Elsewhere, work is going on to improve railway access to the ports where the coal would arrive. New terminals are being built at Avon- mouth and Liverpool. It all makes a timely boost to the railways' business, for they stand to lose much of their .present bulk freight if Michael Heseltine goes ahead with his plan to close half the country's pits. British Rail now carries 60 million tons a year of British Coal's British coal. Some of that carrying capacity will have to be aban- doned. Ah, well, as one door closes another opens, and that goes for mines too, and British Rail must respond. It is a sensible way to run a railway, but — even through a window in the Vale of the White Horse it looks a daft way to run an economy.

IN THE Stock Exchange's penthouse this week I meet an exotic visitor to the City Zhu Rongji: China's vice-premier and the architect of his country's 'socialist market' economy. (Not a word about Hong Kong.) After the new Conservatism of our 1980s, is he bringing us the new Communism? I am not sure that Mr Zhu would care to be called the eastern Nigel Lawson, but, as he says of himself: 'I have been quick and forthright in pointing out the mistakes of my colleagues. However, this may affect the spirit of unity and may have a detrimental effect on efficiency.'