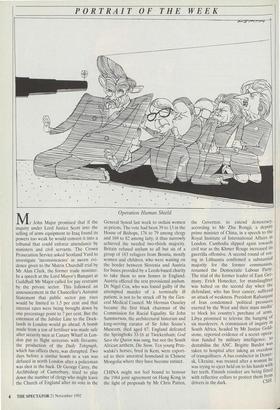 Mr John Major promised that if the inquiry under Lord Justice Scott into the selling of arms equipment to Iraq found its powers too weak he would convert it into a tribunal that could enforce attendance by ministers and civil servants. The Crown Prosecution Service asked Scotland Yard to investigate 'inconsistencies' in sworn evi- dence given to the Matrix Churchill trial by Mr Alan Clark, the former trade minister. In a speech at the Lord Mayor's Banquet at Guildhall Mr Major called for pay restraint by the private sector. This followed an announcement in the Chancellor's Autumn Statement that public sector pay rises would be limited to 1.5 per cent and that interest rates were being brought down by one percentage point to 7 per cent. But the extension of the Jubilee Line to the Dock- lands in London would go ahead. A bomb made from a ton of fertiliser was made safe after security men at Canary Wharf in Lon- don put to flight terrorists with firearms; the production of the Daily Telegraph, which has offices there, was disrupted. Two days before a similar bomb in a van was defused in north London after a policeman was shot in the back. Dr George Carey, the Archbishop of Canterbury, tried to play down the number of clergy who might leave the Church of England after its vote in the Operation Human Shield General Synod last week to ordain women as priests. The vote had been 39 to 13 in the House of Bishops, 176 to 79 among clergy and 169 to 82 among laity; it thus narrowly achieved the needed two-thirds majority. Britain refused asylum to all but six of a group of 183 refugees from Bosnia, mostly women and children, who were waiting on the border between Slovenia and Austria for buses provided by a Leeds-based charity to take them to new homes in England. Austria offered the rest provisional asylum. Dr Nigel Cox, who was found guilty of the attempted murder of a terminally ill patient, is not to be struck off by the Gen- eral Medical Council. Mr Herman Ouseley became the first black chairman of the Commission for Racial Equality. Sir John Summerson, the architectural historian and long-serving curator of Sir John Soane's Museum, died aged 87. England defeated the Springboks 33-16 at Twickenham; God Save the Queen was sung, but not the South African anthem, Die Stem. Ten young Prze- walski's horses, bred in Kent, were export- ed to their ancestral homeland in Chinese Mongolia where they have become extinct.

CHINA might not feel bound to honour the 1984 joint agreement on Hong Kong in the light of proposals by Mr Chris Patten,

the Governor, to extend democracy, according to Mr Zhu Rongji, a deputy prime minister of China, in a speech to the Royal Institute of International Affairs in London. Cambodia slipped again towards civil war as the Khmer Rouge increased its guerrilla offensive. A second round of vot- ing in Lithuania confirmed a substantial majority for the former communists, renamed the Democratic Labour Party. The trial of the former leader of East Ger- many, Erich Honecker, for manslaughter was halted on the second day when the defendant, who has liver cancer, suffered an attack of weakness. President Rafsanjani of Iran condemned 'political pressures, exerted by the West and their mass media' to block his country's purchase of arms. Libya promised to televise the hanging of six murderers. A commission of inquiry In South Africa, headed by Mr Justice Gold- stone, reported evidence of a secret opera- tion funded by military intelligence, to destabilise the ANC. Brigitte Bardot was taken to hospital after taking an overdose of tranquillisers. A bus conductor in Donet- sk, Ukraine, was treated after a woman he was trying to eject held on to his hands with her teeth. Finnish reindeer are being fitted with reflective collars to protect them from