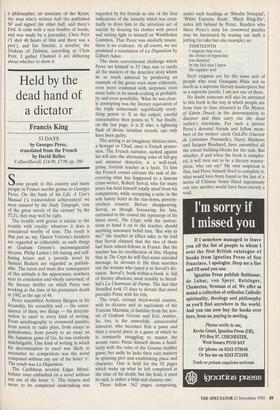 Held by the dead hand of a dictator

53 DAYS by Georges Perec, translated from the French by David Bellos CollinslHarvill, f14.99, f7.99, pp. 260 Some people in this country and many people in France ascribe genius to Georges Perec. On the basis of his Life, A User's Manual Ca transcendent achievement' we were assured by the Daily Telegraph, 'one of the great novels of the century' by the TLS), they may well be right.

The trouble with genius is similar to the trouble with royalty: whatever it does is considered worthy of note. The result is that just as, say, Queen Victoria's knickers are regarded as collectable, so such things as Graham Greene's inconsequential dreams, Philip Larkin's life-hating and self- hating letters and a juvenile novel by Samuel Beckett are regarded as publish- able. The latest and most dire consequence of this attitude is the appearance, nowhere near its conclusion and wholly unrevised, of the literary thriller on which Perec was working at the time of his premature death in 1982 at the age of 46.

Perec resembled Anthony Burgess in his fecundity, his versatility and — the conse- quence of these two things — his determi- nation to excel in every kind of writing. From autobiography to crossword puzzles, from novels to radio plays, from essays to palindromes, from poetry to an essay on the Japanese game of Go, he was restlessly indefatigable. One kind of writing in which his determination to excel was likely to encounter no competitors was the novel composed without any use of the letter `e'. The result was La Disparition.

The Caribbean novelist Edgar Mittel- holtzer once embarked on a novel without any use of the letter 's'. This bizarre and never to be completed undertaking was

regarded by his friends as one of the first indications of the insanity which was even- tually to drive him to the atrocious act of suicide by dousing his clothes with petrol and setting light to himself on Wimbledon Common. That Perec was similarly insane, there is no evidence. At all events, we are promised a translation of La Disparition by Gilbert Adair.

The more conventional challenge which Perec set himself in 53 Days was to outdo all the masters of the detective story whom he so much admired by producing an example of the genre even more elaborate, even more crammed with surprises, even more ludic in its snook-cocking at probabil- ity and even possibility. What he was clear- ly attempting was the literary equivalent of the triple somersault: superficially every- thing points to X as the culprit, careful ratiocination then points to Y, but finally, on the last page, it is Z who, a lightning flash of divine intuition reveals, can only have been guilty.

The setting is an imaginary African state, a Senegal or Chad, once a French posses- sion. The French narrator, sucked against his will into the alternating roles of fall-guy and amateur detective, is a well-read, prissy, fortyish teacher at a lycee. To him the French consul entrusts the task of dis- covering what has happened to a famous crime-writer, Robert Serval, who for many years has held himself totally aloof from his compatriots, while occupying a suite in the sole luxury hotel in the run-down, poverty- stricken country. Before disappearing, Serval, as though foreseeing his fate, entrusted to the consul the typescript of his latest novel, The Crypt, with the instruc- tions to hand it on to the teacher, should anything untoward befall him. 'But why to me?' the teacher in effect asks; to be told that Serval claimed that the two of them had been school-fellows in France. But the teacher has no recollection of this. Hoping that in The Crypt he will find some encoded message, he devours it. He then searches out the woman who typed it at Serval's dic- tation. Serval's book-within-a-book is full of literary allusions, most notably to Stend- hal's La Chartreuse de Parme. The fact that Stendhal took 53 days to dictate that novel provides Perec with his title.

The cruel, corrupt third-world country, with its dictator and its equivalent of the Tontons Macoute, is familiar from the nov- els of Graham Greene and Eric Ambler. So, too, is the unworldly, unsuccessful innocent, who becomes first a pawn and then a crucial piece in a game of which he is constantly struggling to master the arcane rules. Perec himself shows a famil- iarity with the rules of the Greene-Ambler game; but sadly he lacks their easy mastery in spinning plot and establishing place and character. One is held for the 92 pages which make up what he left completed at the time of his death; but the hold, it must be said, is rather a limp and clammy one.

There follow 162 pages comprising, under such headings as ithodia Notepad', `White Exercise Book', 'Black Ring-file', notes left behind by Perec. Readers who share Perec's taste for crossword puzzles may be fascinated by teasing out such a jotting (to take but one example) as:

I suppose that even

Such enigmas are for the same sort of people who read Finnegans Wake not so much as a supreme literary masterpiece but as a supreme puzzle. I am not one of them.

No doubt someone will also be attracted to this book in the way in which people are from time to time attracted to The Mystery of Edwin Drood: in the determination to discover and then carry out the dead author's intentions. For such a person Perec's devoted friends and fellow mem- bers of the writers' circle OuLiPo (Ouvroir de Litterature Potentielle), Harry Mathews and Jacques Roubaud, have assembled all the extant building-blocks for the task. But whether, if and when the book is complet- ed, it will turn out to be a literary master- piece, who can say? My own suspicion is that, had Perec himself lived to complete it, what would have been found in the last of a series of Chinese boxes fitted ingeniously one into another would have been merely a void.