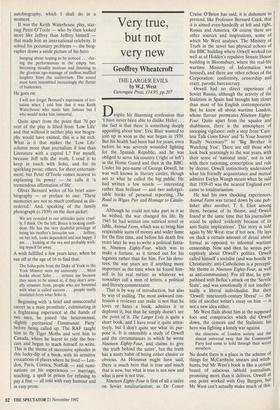 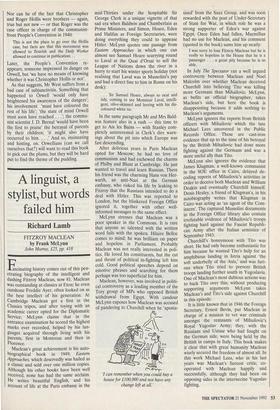 Very true, but not very new

THE LARGER EVILS by W.J. West Canongate Press, £14.95, pp.207 Despite his disarming confession that `I have never been able to dislike Hitler . . . the fact is that there is something deeply appealing about him', Eric Blair wanted to join up as soon as the war began in 1939. But his health had been bad for years, even before he was severely wounded fighting for the Spanish Republic, and he was obliged to serve his country (`right or left') in the Home Guard and then in the BBC. Under his pen-name of George Orwell, he was well known in literary circles, though not to what he called the big public. He had written a few novels — interesting rather than brilliant — and two unforget- table books of personal reporting, The Road to Wigan Pier and Homage to Catalo- nia.

Although he could not take part in it as he wished, the war changed his life. By 1945 he had written one satirical novel or fable, Animal Farm, which was to bring him respectable sums of money and wider fame for the first time, and before his death five years later he was to write a political fanta- sy, Nineteen Eighty-Four, which was to make a fortune, as it turned out for his legatees rather than for him. For his devo- tees, the war years are if anything more important as the time when he found him- self in his real métier: as whatever we nowadays call a man of letters, a political and literary commentator.

That is by way of introduction, but also by way of stalling. The most awkward con- fession a reviewer can make is not that he loves or hates a book, admires it or deplores it, but that he simply doesn't see the point of it. The Larger Evils is quite a short book, and I have read it quite atten- tively, but I don't quite see what its pur- pose is. It is ostensibly a study of Orwell and the circumstances in which he wrote Nineteen Eighty-Four, and claims to give `the truth behind the satire', but the truth has a nasty habit of being either elusive or obvious. As Housman might have said, there is much here that is true and much that is new, but what is true is not new and what is new is not true.

Nineteen Eighty-Four is first of all a satire on Soviet totalitarianism; as Dr Conor Cruise O'Brien has said, it is dishonest to pretend, like Professor Bernard Crick, that it is aimed even-handedly at left and right, Russia and America. Of course there are other sources and inspirations, some of which Mr West analyses. The Ministry of Truth in the novel has physical echoes of the BBC building where Orwell worked (as well as of Holden's repulsive Senate House building in Bloomsbury, where the real-life wartime Ministry of Information was housed), and there are other echoes of the Corporation: conformity, censorship and crazy, parodic bureaucracy.

Orwell had no direct experience of Soviet Russia, although the activity of the Stalinists in Spain had brought him closer than most of his English contemporaries. But he knew all about wartime London, whose flavour permeates Nineteen Eighty- Four. Quite apart from the squalor and shabbiness, there is the atmosphere of snooping vigilance: only a step from 'Care- less Talk Costs Lives' and 'Is Your Journey Really Necessary?' to 'Big Brother is Watching You'. There are still those who look back yearningly to the war years, with their sense of 'national unity', not to say with their rationing, conscription and rule by decree; Orwell instinctively understood what his friendly acquaintance and mutual admirer Evelyn Waugh meant when he said that 1939-45 was the nearest England ever came to totalitarianism.

He had his own shocking experiences, Animal Farm was turned down by one pub- lisher after another, T. S. Eliot among them, because of its theme, and Orwell found at the same time that his journalism could be spiked 'evidently because of its anti-Stalin implications'. This story is told again by Mr West: true if not new. He lays on thick a certain amount of detail about formal as opposed to informal wartime censorship. Now and then he writes per- ceptively about Orwell's politics. Orwell called himself a socialist (and was hostile to Christianity: anti-Catholicism is a percepti- ble theme in Nineteen Eighty-Four, as well as anti-communism). For all that, he sym- pathised with Belloc's attack on the 'Servile State', and was emotionally if not intellec- tually a liberal individualist. But then `Orwell: nineteenth-century liberal' — the title of another writer's essay on him — is not a new idea either.

Mr West flails about him at the supposed foes and conspiracies which did Orwell down, the censors and the Stalinists: his hero was fighting a lonely war against

the closeness of London society and the almost universal sway that the Communist Party had come to hold through their secret members.

No doubt there is a place in the scheme of things for McCarthyite smears and witch- hunts, but Mr West's book is like a certain brand of salacious tabloid journalism, promising more than it delivers. Orwell at one point worked with Guy Burgess, but Mr West can't actually make much of this. Nor can he of the fact that Christopher and Roger Hollis were brothers — again, true but not new — or that Roger was the case officer in charge of the communist- front People's Convention in 1940:

This is not the place to go over the Hollis case, but facts are that this movement was allowed to flourish and the Daily Worker allowed to continue in publication...

Later, the People's Convention re- appears; someone impressed its danger on Orwell, but 'we have no means of knowing whether it was Christopher Hollis or not'.

As that suggests, Mr West suffers from a bad case of subjunctivitis. Something that happened to Orwell 'would only have heightened his awareness of the dangers'; his involvement 'must have coloured the rest of his life'; 'the state of mind Orwell must soon have reached . . .'; the commu- nist scientist J. D. Bernal 'would have been the first to praise' the betrayal of parents by their children; 'it might also have occurred to him. . . .' And so, insinuating and hinting, on. Orwellians (can we call ourselves that?) will want to read this book to pick out the plums, but they will be hard put to find the theme of the pudding.