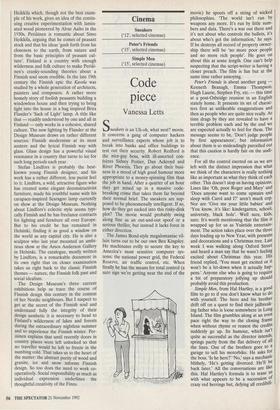 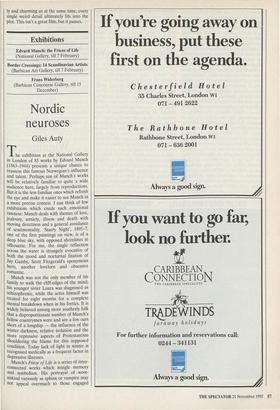 Sneakers is an Uh-oh, what next? movie. It concerns a gang of computer hackers and surveillance experts whose job is to break into banks and office buildings to test out their security. Robert Redford is the nice-guy boss, with ill-assorted con- freres Sidney Poitier, Dan Ackroyd and River Phoenix. They go about their busi- ness in a mood of high good humour more appropriate to a money-spinning film than the job in hand. After a quarter of an hour they get mixed up in a massive code- breaking crime that takes them far beyond their normal brief. The sneakers are sup- posed to be phenomenally intelligent. If so, how do they get sucked into this rinky-dink plot? The movie would probably swing along fine as an out-and-out spoof or a serious thriller, but instead it lacks force in either direction.

The James Bond-style megalomaniac vil- lain turns out to be our own Ben Kingsley. He machinates evilly to secure the key to America's most sensitive computer sys- tems: the national power grid, the Federal Reserve, air traffic control, etc. When finally he has the means for total control (a sure sign we're getting near the end of the movie) he spouts off a string of wicked philosophies. 'The world isn't run by weapons any more. It's run by little num- bers and data. There's a war out there and it's not about who controls the bullets, it's about who's got the information,' he says. If he destroys all record of property owner- ship there will be `no more poor people and no more rich people'. He goes on about this at some length. One can't help suspecting that the script-writer is having a closet preach. The film is fun but at the same time rather annoying.

Peter's Friends is about another gang Kenneth Branagh, Emma Thompson, Hugh Laurie, Stephen Fry, etc. — this time at a post-Oxbridge reunion in an English stately home. It presents its set of charac- ters first as unlikeable exaggerations and then as people who are quite nice really. As time drags by they are revealed to have a terrible problem each and by the end we are expected actually to feel for them. The message seems to be, 'Don't judge people by first appearances', but information about them is so misleadingly parcelled out that this caution is hardly fair on the audi- ence.

For all the control exerted on us we are left with the distinct impression that what we think of the characters is really nothing like as important as what they think of each other. This doesn't stop us having opinions. Lines like 'Oh, poor Roger and Mary' and `Does anyone want to come upstairs and sleep with Carol and I?' aren't much cop. Nor are 'Give me your little babies' and `You know, it's like: kindergarten, school, university, black hole'. Well sure, kids, sure. It's worth mentioning that the film is wrapped up for us as Yuletide entertain- ment. The action takes place over the three days leading up to New Year, with presents and decorations and a Christmas tree. Last week I was walking along Oxford Street and heard a man say that he wasn't feeling excited about Christmas this year. His friend replied, 'You must get excited or it won't be a let-down when it actually hap- pens.' Anyone else who is going to require a bit of preparatory jollying up should probably avoid this production. Simple Men, from Hal Hartley, is a good film to go to if you don't know what to do with yourself. The hero and his brother drift off on a quest to find their jailbreak- ing father who is loose somewhere in Long Island. The film grumbles along at an even pace right the way to the closing frame when without rhyme or reason the credits suddenly go up. Its humour, which isn't quite as successful as the director intends, springs partly from the flat delivery of all the lines. One of the brothers goes to a garage to sell his motorbike. He asks for the boss. 'Is he here?' No,' says a mechanic blithely, 'He's getting divorced. He'll be back later.' All the conversations are like this. Hal Hartley's formula is to tease us with what appears to be a succession of crazy red herrings but, defying all credibili-

ty and charming us at the same time, every single weird detail ultimately fits into the plot. This isn't a great film, but it passes.