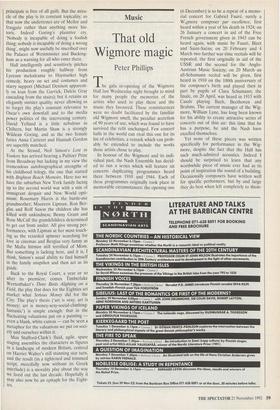 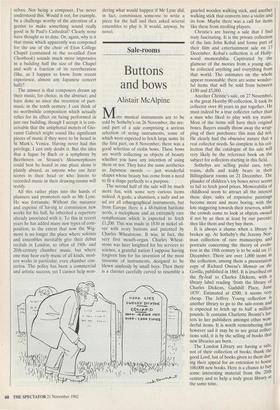 The gala re-opening of the Wigmore Hall last Wednesday night brought to mind for many people the memories of the artists who used to play there and the music they favoured. These reminiscences were no doubt facilitated by the familiar old Wigmore smell, the peculiar accretion of 90 years of use, which was found to have survived the refit unchanged. Few concert halls in the world can rival this one for its list of celebrities, a remark which can prob- ably be extended to include the works those artists chose to play.

In honour of the Wigmore and its indi- vidual past, the Nash Ensemble has decid- ed to run a series which will feature six concerts duplicating programmes heard there between 1910 and 1944. Each of these programmes originally took place in memorable circumstances: the opening one

(6 December) is to be a repeat of a memo- rial concert for Gabriel Faure, surely a W:gmore composer par excellence, first heard within a year of his death in 1924; on 26 January a concert in aid of the Free French government given in 1943 can be heard again, with music by Faure, Bizet and Saint-Satins; on 20 February and 4 March two further war-time recitals will be repeated, the first originally in aid of the USSR and the second for the Anglo- Austrian Music Society; on 20 March an all-Schumann recital will be given, first heard in 1910 on the 100th anniversary of the composer's birth and played then in part by pupils of Clara Schumann; the finale, on 20 April, was heard in 1913 with Casals playing Bach, Beethoven and Brahms. The current manager of the Wig- more, William Lyne, has long been known for his ability to create attractive series of concerts out of thin air: this time that he has a purpose, he and the Nash have excelled themselves.

Yet none of these pieces was written specifically for performance in the Wig- more, despite the fact that the Hall has such much-admired acoustics. Indeed I should be surprised to learn that any worthwhile piece of music ever had as its point of inspiration the sound of a building. Occasionally composers have written well for specific performers; but by and large they do best when left completely to them-

selves. Not being a composer, I've never understood this. Would it not, for example, be a challenge worthy of the attention of a genius to make something sound really good in St Paul's Cathedral? Clearly none have thought so to date. Or, again, why is it that music which apparently was composed for the use of the choir of Eton College Chapel (contained in the so-called Eton Choirbook) sounds much more impressive in a building half the size of the Chapel and with a fraction of its reverberation (like, as I happen to know from recent experience, almost any Japanese concert hall)?

The answer is that composers dream up their music, for choice, in the abstract; and have done so since the invention of part- music in the tenth century. I can think of no worthwhile composition which actually relies for its effect on being performed in just one building, though I accept it is con- ceivable that the antiphonal motets of Gio- vanni Gabrieli might sound like significant pieces of music if they were to be heard in St Mark's, Venice. Having never had this privilege, I can only doubt it. But the idea that a fugue by Bach or a symphony by Beethoven or Strauss's Metamorphosen could best be heard in one place alone is plainly absurd, as anyone who can hear scores in their head or who listens to recorded music in their drawing-rooms will testify.

All this rather plays into the hands of planners and promoters such as Mr Lyne. He was fortunate. Without the nuisance and expense of having to commission new works for his hall, he inherited a repertory already associated with it. To this in recent years he has added many new types of com- position, to the extent that now the Wig- more is no longer the place where soloists and ensembles inevitably give their debut recitals in London, so often of 19th- and 20th-century chamber music, but where one may hear early music of all kinds, mod- ern works in particular, even chamber con- certos. The policy has been a commercial and artistic success; yet I cannot help won-

dering what would happen if Mr Lyne did, in fact, commission someone to write a piece for the hall and then asked several ensembles to play it. It would, anyway, be novel.