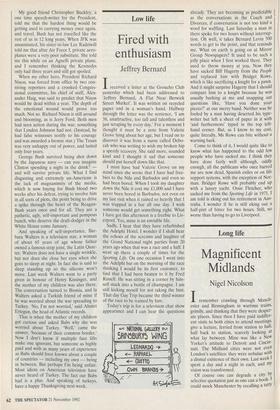 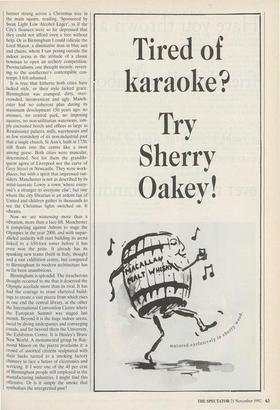 Iremember crawling through Manch- ester and Birmingham in wartime trains, grimily, and thinking that they were desper- ate places. Since then I have paid indiffer- ent visits to both cities to attend meetings, give a lecture, ferried from station to hall, hall back to station, scarcely looking at what lay between. Mine was like a New Yorker's attitude to Detroit and Cincin- nati. The Midland cities were not even London's satellites: they were nebulae with a dismal existence of their own. Last week I spent a day and a night in each, and my vision was transformed.

Of course one can degrade a city by selective quotation just as one can a book. I could mock Manchester by recalling a tatty banner strung across a Christmas tree in the main square, reading, 'Sponsored by Swan Light Low Alcohol Lager', as if the City's finances were so far depressed that they could not afford even a tree without help. Or in Birmingham I could ridicule the Lord Mayor, a diminutive man in blue suit and chains, whom I saw posing outside the indoor arena in the attitude of a classic bowman to open an archery competition. Provincialisms, one thought meanly, revert- ing to the southerner's contempible con- tempt. I felt ashamed.

It is true that hitherto both cities have lacked style, or their style lacked grace. Birmingham was cramped, dirty, over- crowded, inconvenient and ugly. Manch- ester had no coherent plan during its maximum development 150 years ago, no avenues, no central park, no imposing squares, no non-utilitarian waterways, sim- ply encrusted hotels and offices as large as Renaissance palaces, mills, warehouses and so few reminders of its non-industrial past that a single church, St Ann's, built in 1720, still floats into the centre like a swan among geese. Both cities were muscular, determined. Not for them the grandilo- quent agora of Liverpool nor the curve of Grey Street in Newcastle. They were work- places, but with a spirit that impressed out- siders. Manchester is not as described by its artist-laureate Lowry a town 'where every- one's a stranger to everyone else', but one where the city librarian is an ardent fan of United and children gather in thousands to see the Christmas lights switched on. It vibrates.

Now we are witnessing more than a vibration, more than a face-lift. Manchester is competing against Athens to stage the Olympics in the year 2000, and with unpar- alleled audacity will start building its arena linked to a 650-foot tower before it has even won the prize. It already has its spanking new trams (built in Italy, though) and a vast exhibition centre, but compared to Birmingham its modern architecture has so far been unambitious.

Birmingham is splendid. The treacherous thought occurred to me that it deserved the Olympic accolade more than its rival. It has had the courage to erase cluttered build- ings to create a vast piazza from which rises at one end the central library, at the other the International Convention Centre where the European Summit was staged last month. Beyond it is the huge indoor arena, laced by diving underpasses and converging canals, and far beyond them the University, the Exhibition Centre. It is Huxley's Brave New World. A monumental group by Ray- mond Mason on the piazza proclaims it: a crowd of assorted citizens sculptured with their backs turned to a smoking factory chimney to face a future of electronics and servicing. If I were one of the 40 per cent of Birmingham people still employed in the manufacturing industries, I might find this offensive. Or is it simply the smoke that symbolises the unregretted past?