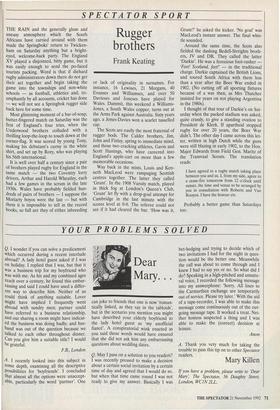 Q. I wonder if you can solve a predicament which occurred during a recent interlude abroad? A lady hotel guest asked if I was on holiday. I replied that I was, but that it was a business trip for my boyfriend who was with me. As his and my combined ages reach over a century, he found this embar- rassing and said I could have used a differ- ent way to describe him. Neither of us could think of anything suitable. Lover might have implied I frequently went abroad with sundry men; partner could have referred to a business relationship, and our sharing a room might have indicat- ed the business was doing badly; and hus- band was out of the question because we talked to each other throughout dinner. Can you give him a suitable title? I would be grateful.

E B., London A. I recently looked into this subject in some depth, examining all the descriptive Possibilities for 'boyfriends'. I concluded that almost all the options were unaccept- able, particularly the word 'partner'. One can joke to friends that one is now 'roman- tically linked, as they say in the tabloids', but in the scenario you mention you might have described your elderly boyfriend to the lady hotel guest as 'my unofficial fiancé'. A conspiratorial wink enacted as you said these words would have ensured that she did not ask him any embarrassing questions about wedding dates.

Q. May I pass on a solution to you readers? I was recently pressed to make a decision about a certain social invitation by a certain time of day and agreed that I would do so, but when that time came round I was not ready to give my answer. Basically I was bet-hedging and trying to decide which of two invitations I had for the night in ques- tion would be the better one. Meanwhile the call was about to come through and I knew I had to say yes or no. So what did I do? Speaking in a high-pitched and unnatu- ral voice, I recorded the following message into my answerphone: 'Sorry. All lines to the Carmarthen exchange are temporarily out of service. Please try later.' With the aid of a tape-recorder, I was able to make this message come continuously out of the out- going message tape. It worked a treat. Nei- ther hostess suspected a thing and I was able to make the (correct) decision at leisure.

Anon A. Thank you very much for taking the trouble to pass this tip on to other Spectator readers.

If you have a problem, please write to 'Dear Mary, The Spectator, 56 Doughty Street, London, WCIN 2LL.