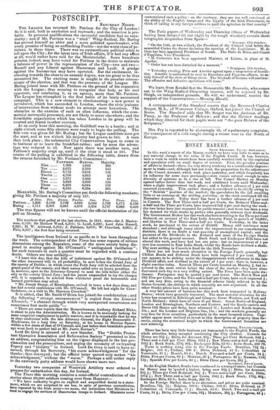 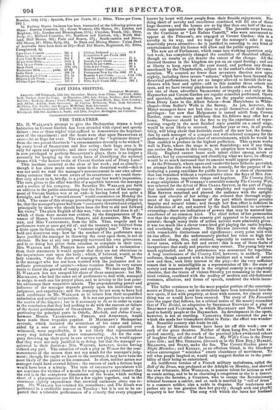 In this week's report of the Money-market we have very little to state as to any material change in the value of the English Funds. It has, however, been a week in which events have been carefully watched both by the capitalist and speculator with no small degree of interest. First, the peculiar position of affairs in Ireland-then, the very strong tendency to a considerable improve- ment in trade-and, although last not least, the preparation for the adjustment of the Consol Account, which took place yesterday, and which frequently has its influence for some days previously-were causes natural enough to raise diversity of opinions as to a rise or fall. The Consol Market on Monday opened rather flatter than last week, and continued heavy until Wednesday, when a slight improvement took place ; and a further advance of 1 per cent occurred yesterday. This sudden change is considered to be chiefly owing to the "Bearish" position of the market; the speculators for the fall receiving little or no contango at the settling, yesterday, on the stock continued till the November Account. Today there has been a further advance ofper cent in Consols. The New Three-and-a-half per Cents, the Reduced Three-and- a-half and the Three per Cents, have improved full 4 per cent during the week : the two latter have just reopened for public transfer ; and there has been a very fair demand for these stocks by parties who generally reinvest their dividends. The Government Broker has this week also been investing in the Three per Cent Reduced, on account of the East India Annuity Fund, in parcels of 10,0001., and likewise in New Three-and-a-half per Cents. Yesterday, in the latter stock, he purchased to the extent of 20,0001. Money still continues most abundant ; and although many admit the improvement in our manufacturing districts, there is no doubt a vast quantity of unemployed capital ; and the payment of the Dividends in the Reduced and some of the Foreign Stocks has added to the general amount. Bank Stock and Exchequer Bills have not altered this week, and have had but one price : but an improvement of 1 w_r cent has occurred in East India Stock, whilst the Bonds have declined a As& The next settling in Consols is fixed for the 28th November. There has not been much alteration in the Foreign Funds generally, but Chilian Bonds and Deferred Stock have both improved 2 per cent. Mexi- can appears to be sinking under the disappointment with reference to the late Dividend affair, and declined to the extent of 1 per cent : there is, however, a slight reaction today. Spanish Three per Cents receded on Monday 1, but re- covered to the same extent before the close of the market: they have since fluctuated each day to a very trifling extent. The Fives have been quite sta- tionary. Portuguese may be quoted 4 per cent lower. The Dutch New and Old Five per Cents, and the Two-and-a-half per Cents, have each improved 5; and are very firm, owing to the financial scheme lately referred to by the States-General, the sittings in which assembly are now adjourned. In all the other Stocks prices have been quite nominal. A very fair amount of business has this week been transacted in Railway Shares; which have generally improved. The most material alteration for the better has occurred in Edinburgh and Glasgow, Great Western, and York and North Midland ; which have all risen 2/ per Share. Great North-of-England, London and Birmingham, Northern and Eastern, and the South-eastern and Dover Old Shares and Scrip, have advanced IL; London and South-western, 10s.; and the London and Brighton line, 15s.: and the markete generally are very firm for these securities, particularly in the most favoured shares. Capi- taliats appear more inclined to invest in this description of property than for- merly, seeing the unnatural height to which the Government Securities are now attaining.