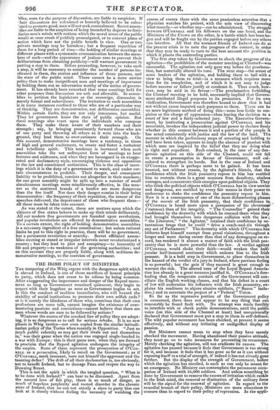 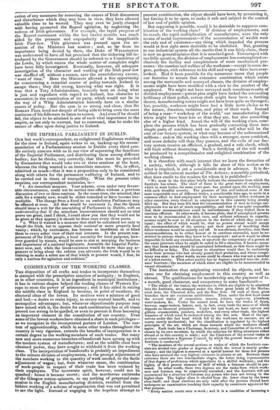 THE tampering of the Whig organs with the dangerous spirit which is abroad in Ireland, is one of those sacrifices of honest principle to party, which does not cease to be odious by being common. After exaggerating the importance and danger of the Repeal move- ment so long as Government remained quiescent, they begin to coquet with their bugaboo as soon as Government begins to act. Is this the conduct of reckless incendiaries, who will hazard the stability of social institutions to promote their own selfish ends ? or is it merely the blindness of those who, conscious that their own professions are mere talk, cannot imagine the existence of over- mastering passions and convictions—cannot believe that there are men whose words are sure to be followed by actions? Whatever the source of the crooked line of policy they are adopt- ing, it is so dangerous as to call for serious rebuke. It is no new phasis in Whig tactics—nor even copied from the similar latitudi- narian policy of the Tories when recently in Opposition. "Just so much public calamity as may get their rivals out and themselves in," was their game when the nation was engaged single-handed in a war with Europe : this is their game now, when they are forward to proclaim that the Repeal agitation endangers the integrity of the empire. Some of them represent the prosecution of O'CoN- NELL as a persecution, likely to recoil on the Government ; as if O'CoNNELL, meek innocent, were not himself the aggressor and the taunting defier I The drift of all their declamation is, too obviously, not to benefit Ireland, but to damage Pam. and reopen the way to Downing Street.

This is not the spirit in which the tangled question, " What is to be done with Ireland?" can bear to be discussed. Apart from the natural love of fair play, there is so much of danger, so much of hopeless perplexity and rooted disorder in the chronic state of Ireland, that no one not utterly a slave to party bias can look at it closely without feeling the necessity of watching the course of events there with the same passionless attention that a physician watches his patient, with the sole view of discovering what remedy—or whether any—can be adminiatered. The struggle

between O'CONNELL and his followers on the one band, and the Ministers of the Crown on the other, is a battle which hai been be- gun and will be fought out by the parties engaged before any others can interfere. All that the warmest friends of Ireland can do at the present crisis is to note the progress of the contest, in order that they may be ready to turn to the best account the position in which it places the contending parties.

The first step taken by Government to check the progress of the agitation—the prohibition of the monster meeting at Clontarf—was successful. The agitation not only gave way before the proclama- tion, but materially altered its tone. The next step—the arrest of some leaders of the agitation, and holding them to bail with a view to bring them to trial—is a measure which requires more time for its completion, and of which it is not easy to judge before success or failure justify or condemn it. Thus much, how- ever, may be said in its favour:—The proclamation forbidding the Clontarf meeting to be held, necessarily implied that Govern- ment attributed illegal purposes to its promoters. For its own vindication, Government was therefore bound to show that it had not without cause imputed such purposes to them. There can be no more legitimate method of doing this—none less liable to sus- picion or the charge of oppression—than leaving the decision to a court of law and a fairly-selected jury. The Executive Govern- ment, by instituting a prosecution against O'Cornvera. and his associates, invokes the independent judicial power to declare freely whether in this contest between it and a portion of the people it has acted consistently with justice and the law of the land. The manner in which the preliminary steps of arresting and holding to bail have been taken, appears to imply the absence of passion with which men are inspired by the belief that they are doing what is right and expedient. Such conduct, in the case of any dan- gerous agitation on this side of the Channel, could not fail to create a presumption in favour of Government, well cal- culated to strengthen its hands. But in the case of Ireland and O'Cossets, there is perhaps more to be gained. It has been boasted, not without reason, by the Agitator's friends, that the confidence which the Irish peasantry repose in him has enabled him to restrain them in a great measure from desultory, aimless outrages, and concentrate their energies upon political objects. They who think the political objects which O'Cortisem. has in view unwise and dangerous, are entitled by every fair means in their power to endeavour to shake the confidence the peasantry repose in him. Now it is a consequence of one of the most disheartening phases of the morale of the Irish peasantry, that their confidence in, O'CONNELL is based more upon a persuasion of his cleverness' (' cuteness) than of his integrity. " The Counsellor" gained their confidence by the dexterity with which he rescued them when they had brought themselves into dangerous collision with the law ; " the Liberator," " the Agitator," retained their confidence by os- tentatious brags that he could " drive a coach-and-six through any act of Parliament." The dexterity with which O'Cosirters. has hitherto kept himself exempt from penal visitations, throughout a longer and more daring career than that of any demagogue on re- cord, has rendered it almost a matter of faith with the Irish pea- santry that be is more powerful than the law. A verdict against O'CONNELL would shake their faith—would weaken that half- jocular half-immoral sentiment which endears him to the Irish peasant. It is a bold step in Government, to place themselves in the hazard of the verdict of a jury in Ireland, where partisan feeling is so powerful; but the gain if they succeed is great enough to warrant the risk. The altered tone of the Loyal Repeal Associa- tion has already in a great measure justified it. O'CoNNELL's fore- boding that the temperate conduct of the Government will con- ciliate the English working classes, and that his defeat in a court of law will undermine his influence with the Irish peasantry, ex- plains his readiness to abjure abusive epithets, (" Saxon" inclu- sive,) and to entertain the project of a "Federal" Union.

So far as the repressive portion of the Government policy is concerned, there does not appear to be any thing that can reasonably be found fault with. No attempt was made forcibly to interfere with or check public demonstrations, until the public voice (on this side of the Channel at least) had unequivocally declared that Government must put a stop to them in self-defence. The wild popular movement has been checked, at present it seems effectively, and without any irritating or undignified display of passion.

But Ministers cannot mean to stop when they have merely checked the movement. Having abandoned their passive attitude, they must go on to take measures for preventing its recurrence. Merely checking the agitation, will not eradicate its causes. The agitation has paused because it feels that Government is too strong for it, and because it feels that it has gone as far as it can without exposing itself to a trial of strength, if indeed it has not already gone further. But the display of the strength of Government, before which the agitation has recoiled, is such as can only be meant for an emergency. No Ministry can contemplate the permanent occu- pation of Ireland with 34,000 soldiers. And unless something be done by Government to remove the causes of irritation which rankle in the Irish mind, the removal or diminution of the military force will be the signal for the renewal of agitation. In regard to the remedial branch of their policy, Ministers are more obnoxious to censure than in regard to their policy of repression. In the appli-

cation of any measures for removing the causes of Irish discontent and disturbance which they may have in view, they have allowed valuable time to be wasted. They may even be justly charged with having promoted the Repeal agitation, by neglecting the redress of Irish grievances. For example, the rapid progress of the Repeal movement within the last twelve months was much aided by the pressure and unpopularity of the inapplicable Irish Poor-law. This grievance was pressed upon the at- tention of the Ministers last session ; and, so far from its importance being denied by them, the Duke of WELLINGTON was understood to have all but promised that the tinkering bill in- troduced by the Government should be referred to a Committee of the Lords, by which means the whole matter of complaint might have been fully investigated. Eventually, however, all adequate investigation of the character and working of the Irish poor-law was shuffled off, without a reason, save the unsatisfactory excuse, "want of time." Here the Ministers allowed a fine opportunity for commencing a remedial course of policy towards Ireland to escape them ; they did wrong, knowing what was right. It is true that a Tory Administration, honestly bent on doing what is just and expedient with regard to Ireland, has obstacles to encounter, in the constitution of its party, which would not lie in the way of a Whig Administration honestly bent on a similar course of policy. But the case is so strong and clear, that Sir ROBERT PEEL need not despair of being able to bring even the most mutinous of his followers to listen to reason. And even if he should fail, the object to be attained is one of such vital importance to the empire, as not only to warrant, but to command, that he stake his tenure of office upon doing justice to Ireland.