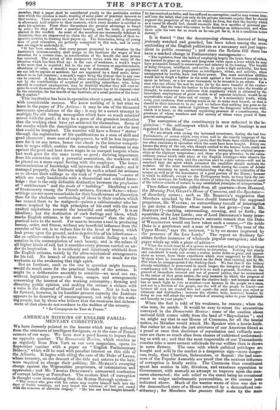 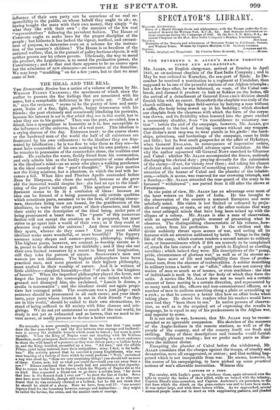 Ws have formerly pointed to the lessons which may be gathered from the strictures of intelligent foreigners, as in the case of French censors of our ways. We have now a good lesson to impart from an opposite quarter. The Denwcralic Review, which reaches us as regularly from New York as our own magazines, opens its September number with a paper on " English Parliamentary Bribery," which will be read with peculiar interest on this side of the Atlantic. It begins with citing the case of the Duke of LEEDS, whose tenantry, on the descent of the title and estates to the heir, were required to change their politics; Mr. MURRAY'S sweeping charge against the Wigtonshire proprietors, of intimidation and oppression ; and Mr. Thomas DUNCOMBE'S unreserved confession of corrupt bribery at Pontefract. The modern kind of corruption is thought more demoralizing than the Rotten Borough system- " The tenant who goes with his estate may resolve himself back into the days of feudal vassalage, and may invest the relations of lord and vassal with the romance of chivalric drapery." "He has not been bought himself, he has received no bribe, and has suffered no corruption ; and he may reason him- self into the belief, that not only do his private interests require that he should support the proprietor of the soil on which he lives, but that the loyalty which as a vassal he should feel, should reconcile him to a sacrifice of personal par- tialities. But the voter who comes to the hustings as independent, and when there sells his vote for as much as he can get for it, is in a condition below slavery."

It is feared " that the decomposing element, instead of being jealously watched and guarded, has been taken among the more unthinking of the English politicians as a necessary and just ingre- dient in public economy' ; and since the Reform Bill there has been a marked change in Parliamentary management- " The legislator, from the habit of employing largely the brute force of riches, has learned to place an undue and dangerous value upon a lever which he may have persuaded himself is conservative and salutary in its bearing. The troubleof being virtuous, intelligent, and active, to quote a high authority, has been dispensed with just in proportion as intelligence, virtue, and activity, when unsupported by wealth, have lost their power. The most matchless abilities would fail to weigh a feather in the scale against a few thousand pounds to be spent in bribery, or a few more thousands to be invested in an estate. For a man who can obtain the seat he seeks for by the mere transfer of the exuber- ance of his income from his banker to his election-agent, to take the trouble of thought, to endeavour to cultivate that popularity which is obtained by the benevolent employment of great wealth or of superior intellect, would be an unprofitable waste of time and of energy. It is a melancholy truth, which every year confirms, that nothing tends so far to make men honest, as that it should be their interest to be so; and we believe that nothing has gone so far to preserve our own national legislature from the dangerous influences with which it is beset, as the constant regulating pressure of a constituency, the greatness of whose numbers and the secrecy of whose votes guard it from general corruption."

The corruption of the constituency is seen reflected in the le- gislation : " the self-respect which is lost at the hustings is not regained in the House"—

" We are struck with seeing the increased recurrence, during the last two Parliaments, of scenes which, even when told in the courtly language of the Governmental reporter, [Hansard,] prove that the brute force which buys seats too often continues in operation when the seats have been bought. Every one knows the story of the cat, who, though exalted to the human form, could not be checked by the most solemn restraints from betraying her original propen- sities at the slightest temptation; and those who pay attention to the extra- ordinary scenes which take place at the English hustings—who observe the means taken to buy votes, and the exertion used to cajole voters—will not be surprised that the spirit which animated the candidate should animate the member. Of the more inarticulate noises made during the course of debate it is not necessary to speak, notwithstanding that they axe indicative of the temper as well as of the demeanour of a good portion of the House; because it would be difficult, except on the Pythagorean basis, to trace back the cat- calls, the crowings, the barkings, the shouts of talley-ho, the imitations of most of the inferior sounds of nature, to any established principles of interpretation.* Then follow examples culled from all quarters—from Hansard, the Morning Post, GRANT'S House of Commons, and the Spectator— of disorderly scenes ; such as Mr. ROEBUCK'S suggestion that Members attacked by the Times should horsewhip the supposed proprietor, Mr. WALTER; an extraordinary tumult of interruptiow to put down a Member whose name is not given—Twits it Mr. Baawxrr ?]—barking, caterwauling, crowing, and so forth; the squabbles of the Law Lords ; one of Lord BaotroaAst's hasty inter- positions, and Lord MELBOURIVR'S sarcastic remark that the Duke of WELLINGTON would not have taken such a course,—" the noble Duke is a gentleman and a man of honour." " The tone of the Upper House," says the reviewer, " is by no means improved by the presence of the Law Lords." The report on Sudbury fur- nishes further instances of wholesale popular corruption ; and the paper winds up with a piece of advice- " What the result must be of a system so extended as that of bribery in Great Britain, it requires but slight observation to determine. Nothing but sturdy and consistent honesty can secure a nation under debts so great and oppres- sions so severe, from those expedients which were suggested by Sir Robert Walpole when he lessened the interest on the Debt then existing, and by Mr. Pitt when he misappropriated the Sinking-fund. We fear that if the bribery already established is persevered in much longer, the integrity of the British constituency will be destroyed ; and it is on such a ground, therefore, on the ground of immediate interest and not of general justice, that we recommend to the rulers of that great nation, the only measure by Which the progress of corruption may be checked. Increase the elective body: not because one man has as much right to vote as another—not because in the people as a mass, and not in a fraction of the people, can the will of the people be found—not because all men are created free and equal—for such maxims you reject as visionary and destructive : increase the elective body, however, because by doing so you will adopt the only method of securing order to your legislature and honesty to your people."

When the fool is told of his weakness, he resents ; when the wise man, he mends. It would be easy to retort the accusations conveyed in the Democratic Review : some of the caution about national faith comes oddly from the land of "Repudiation"; and we might say that in our House of Commons, for all the bestial noises, no Member would attack Mr. Speaker with a bowie-knife. But rather let us take the just strictures of our American friend as a proof at once that doctrines of repudiation and ruffianly man- ners are there as much alien from classes of cultivated understand- ing as with us ; and that the most respectable of our Transatlantic cousins take a more earnest solicitude for our welfare than is shown in mere flattery. The ease with which political privileges are bought and sold in the market is a dangerous sign—more danger- ous, truly, than Chartism, Rebeccaism, or Repeal : the bad man- ners of the Popular Assembly are proof that the noxious influence of corruption is fatally active. The Commons thus constituted spent last session in idle, frivolous, and vexatious opposition to Government, with scarcely an attempt to improve upon the mea- sures obstructed ; the sole relief to the ennui being an occasional resort to vulgar melodramatic personalities, or the coarser jests indicated above. Much of the wanton waste of time was due to the demoralized state of a House returned by a demoralized con- stituency; for Members who procure their seats by the mere

influence of their own party can be conscious of no real re- sponsibility to the public, on whose behalf they ought to sit ; or, having bought the seats with their own money, they simply " do what they like with their own" ; the manners of the few real "representatives " following the prevalent fashion. The House of Commons ought to make laws for the proper discipline of the people ; but hitherto it has lacked the vigour, method, and earnest. ness of purpose, to determine even on a scheme for the instruc- tion of the country's children ! The House is so heedless of the national welfare, that, in the pursuit of paltry factious objects, it will neither govern nor let others govern. Obviously, the way to mend the product, the Legislature, is to mend the productive power, the Constituency ; and to that end there appears to be no course open but the admission of new elements—an extension of the franchise. We may keep "muddling " on for a few years, but to that we must come at last.