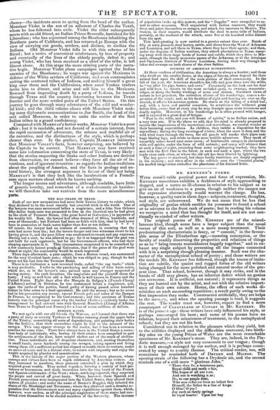 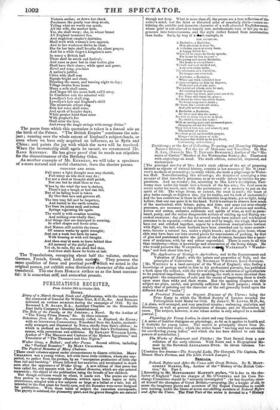 WITH considerable poetical power and force of expression, Mr. KENNEDY sometimes exhibits a feebleness of style approaching to doggrel, and a metre so ill-chosen in relation to his subject as to give an air of weakness to a poem, though neither the images nor the expression abstractedly would warrant the charge. He has, however, a quality rare in these days— subjects, treatment, thoughts, and style, are uuborrowed. We do not mean that he has that originality of genius which enables its possessor to found >a school or to advance to the front rank of poets; but in reading his volume we recognize a mind that has thought for itself, and are not con- tinually reminded of other writers. The original poems of Mr. KENNEDY are of the miscel• laneous kind, though some have a larger subject than the usual verses of this sort, as well as a more massy treatment. Their predominating characteristic is fancy, or " conceit," in the favour- able sense of the Elizabethan age,—meaning conception, or the faculty of readily discerning the properties and relations of things so as to " bring remote resemblances happily together," and to ex- haust any single subject by presenting all the images connected with it in a surprising though pleasing manner. Such was the cha- racter of the metaphysical school of poetry ; and those writers are the models Mr. KENNEDY has followed, though the traces of imita- tion are subtile, the quaint and rugged forms of the old writers being changed for the more polished and natural modes of the pre- sent time. That school, however, though it may strike, and in the hands of skill may please, has an inherent defect which no genius can overcome. It is artificial, not natural ; it represents things as they are hunted out by the artist, and not with the relative import- ance of their own nature. Hence, the effect of such works di- minishes on each succeeding repetition ; a result partly owing to the first impression they make. Constructed artificially, they are helps to the menwry, and when the opening passage is read, it suggests the rest. The reader must not, however, expect to find a mere counterpart of CLEAVELAND or COWLEY in Mr. KENNEDY. He is of the present age : these writers have only influenced his style, or perhaps encouraged his bent ; and some of his poems have no relation, beyond their minuteness of treatment, to the metaphysical school ; but they are not his best. Considered not in relation to the pleasure which they yield, but to the abilities displayed and the difficulties overcome, two birth- day odes on the young Prince of Wales are the most remarkable specimens of Mr. KENNEDY'S muse. They are, indeed, in the Pin- daric measure,—a style not very consonant to our tongue ; though it is well enough managed by our author, and it is perhaps conse- crated by usage to courtly themes. The critical reader, too, will sometimes be reminded both of DRYDEN and MILTON. The opening strain of the following has a Drydenic air, and the second reminds one of a still more " glorious John." " There they lie, a beauteous pair,

The hopes of all our rice.

And one is watching n.ar ;

He, to our people dear, Who sees reflected from an infant face Himself, the father to a line of kings.

In royal hearts! Upon her boy

Victoria smiles; or down her cheek Perchance the pearly tear-drop steals, Telling what no words can speak,

All the wife, the mother feels.

Yes, she shall weep; she, in whose breast All England treasured lies, And mightiest empire's destinies, Shall melt with woman's love opprest, And in her weakness thrice be blest.

She for her babe shall breathe the silent prayer, And for a while forget a kingdom's care.

In many a British hall There shall be mirth and festival; And none so poor but in that festive glee Shall have their share; while sport and game, Revel and song, proclaim A nation's jubilee. Cities wide shall rear Signals bright and clear, Dazzling the moon, and turning night to day ; Village swains from home Many a mile shall come, And linger till the morn bath call'd away. In Cambrian vale the minstrel wild Lewellyn's heir shall sing, Lewellyn's heir and England's child The mountain echoes ring.

Erin her voice shall raise, And speak of happier days; While greater hand than mine With prophet's fire Shall seize the lyre, And sweep the magic strings with energy divine."

The poem from which this quotation is taken is a formal ode on the birth of the Prince. "The British Empire" continues the sub- ject; running over the whole extent of England's subject-lands, or even where we have only acquired an influence, as in Syria and

China ; and paints the joy with which the news will be received.

When the laureateship shall again be vacant, we recommend Mr. RANK KENNEDY. He has given proof that he needs not stipulate for the discontinuance of the Birthday Odes. As another example of Mr. KENNEDY, we will take a specimen of a more natural and useful character, from the shorter poems.

Full many a light thought man may cherish,

Full many an idle deed may do ;

Yet not a deed or thought shall perish, Not one but he shall bless or rue.

When by the wind the tree is shaken,

There's not a bough or leaf can fall, But of its falling heed is taken By One that sees and governs all.

The tree may fall and be forgotten, And buried in the earth remain; Yet from its juices rank and rotten Springs vegetating life again.

The world is with creation teeming, And nothing ever wholly dies; And things that are destroyed in seeming, In other shapes and forms arise.

And Nature still unfolds the tissue Of unseen works by spirit wrought ; And not a work but bath its issue With blessing or with evil fraught.

And thou may'st seem to leave behind thee All memory of the sinful past; Yet oh, be sure, thy sin shall find thee, And thou shalt know its fruits at last.

The Translations, occupying about half the volume, embrace German' French, Greek, and Latin autheg They possess the same qualities of force and poetical pow filch we noted in the original poems, yet exhibit some distinctive character of the author translated. The one from HORACE strikes us as the least success- ful: it is somewhat stiff, and somewhat prosaic.