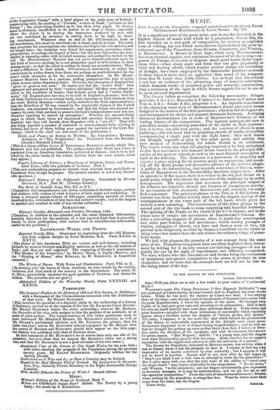 First Sonata for the Pianoforte ; composed and dedicated to his friend, FELIX MENDELSSOHN BARTHOLDY, by Loris SPOHR. Op. 125.

IT is a significant trait of the great artist, and shows the devotion to the highest objects of music with which he is penetrated, that in this, his first entrance on a new path of composition, he revives an exploded form of writing, but one which nevertheless characterized the most in- tellectual age of the Pianoforte, from DUSSEK, CLEMENTI, and WOELFI., to BEETHOVEN. A Sonata in these days, when even MENDELSSORN, the most classical, regular, and consistent inventor of all the young com- posers of Europe, is content to disperse much good music under capri- cious titles—when every style and form that can give popularity to brief and fleeting efforts, which require neither design nor continuity of thought, have been employed by the fashionable pianists—a sonata in these times is more truly an apparition than many of the composi- tions that M. LISZT thus oddly entitles. Let us hope that this revival is not less an evidence of the advancing stage of musical cultivation, which demands works of sustained power and scientific construction, than a testimony of the light in which Smile regards his art in one of its most misused departments. The Sonata before us comprises the following movements; Allegro moderato A flat 3-4 ; Romanza in F minor 3-8 ; Scherzo in C minor and Trio in A flat ; Finale A flat, allegretto 2-4. An especial compliment to the charming vocal style of MENDELSSOHN'S Lieder ohne wikte seems designed in the motivo of the first movement ; which is full of elegant air, and accompanied by choice and piquant chromatic harmony. A singing character predominates (as in some of BEETHOVEN'S Sonatas) as the leading feature of the composition. The figurate passages are new in pianoforte music—savouring somewhat of the violin in their construc- tion, it is true, but still very pretty ; and the contrast of effects is most judicious,—the left hand now in spreading chords of tenths or twelfths accompanying a single part with the right hand ; then both hands are brought together to play in five strict parts, and exhibit that rare method of harmonizing for which Spoint is so celebrated. The double notes, and other full playing required to be duly articulated in this first movement, will demand hands versed in the principal diffi- culties of the modern school, as well as the most finished conception of style in the delivery. The Romance is a movement of simplicity and repose ; a piece relying for its interest solely on expression, and avoid- ing all the florid groups and decorative phrases of the modern adagio. A pathos in the harmonizing, that reminds sometimes of GLUCK, some- times of BEETHOVEN in the Rasomoffsky Quartets, reigns here. After an episode in D flat major, there is a return to the original theme on a pedal point, which will attract the attention of the musician by its artful management.' The sequences that announce the principal subject of the Scherzo are beautiful, though not features of conspicuous novelty. In movements of this character, BEETHOVEN will certainly not easily find a successor. The principal phrase of the Trio in A flat derives its interest less from intrinsic novelty than from the elegant motion of the accompaniment in the tenor part of the left hand, which gives the melody a new colouring. The continuance of this tenor phrase in the second part of the trio leads to some surprising and beautiful harmony. The opening of the Finale on the chord of the 9-7 is elegant, and in the ariose taste of certain last movements in BEETHOVEN'S Sonatas. Be- sides a prevailing elegance of phrase, there is much fine counterpoint and strict part-writing in this movement ; which sundry passages of triplets, arpeggios of chords, and here and there a scale or two, (in general most religiously avoided by SPoRE,) contribute on the whole to bring somewhat nearer than the rest within the ordinary range of piano- forte music.

We hail with pleasure the promise of a new coinage from the same mint of art. Pianoforte-composers have too often degraded their instru- ment by writing for it merely sensual ear-tickling passages—if not to gratify the eye by the sight of legerdemain and difficulty vanquished. We want writers who like BEETHOVEN and SPORE bring the seriousness of symphony and quartet composition to the piano, to produce its tree eloquence; and we trust that the example here set will not be lost on the rising talent of the day.