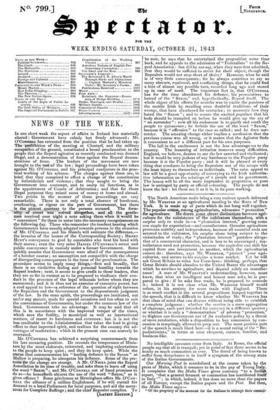 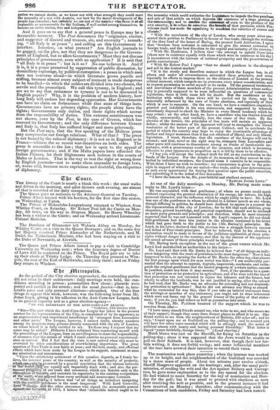 Page 1, 21 October 1843 — No intelligible accounts come from Italy. At Rome, the official
Close

No intelligible accounts come from Italy. At Rome, the official

people say that all is tranquil; yet in point of fact there seems to be nearly as much commotion as ever. The dread of being known to suffer from disturbance is in itself a symptom of the uneasy state of the Italian Governments.

Our Morning Post is scandalized at the course taken by the press of Malta, which it assumes to be in the pay of Young Italy. It complains that the Malta Times gives currency "to a foolish report, that a general ferment or commotion has manifested itself in Italy '" ; in which, indeed, it has done no more than the papers of all Europe, except the Italian papers and the Post. But then, the Malta Times says-

pation we cannot decide, as we know not with what strength they could meet the necessity of a war with Austria, nor how far the moral development of tie people has extended ; but certainly we are not of the number who.dtem it Alia impossible or unreasonable for the Italians, If well united amongthemselves, to become an entire nation, free and independent"

And it goes on to say that a general peace in Europe may be a favourable moment. The Post denounces the " originater, exciter, and suggester of discord and treason, sin, and enormity"; remark- ing, " all Italy is at peace " ; and calling on this Government to interfere. Interfere, on what pretext ? Are English journals to be gagged, on the plea, not that they are dangerous to the Govern- ment of England, but to alien Governments ? Must they not discuss principles of government, even with an application ? It is said that " all Italy is at peace " : but is it so ? No one believes it. And if it is, it is a peace preserved by suppression of public discussion, by domiciliary espionage, by political corruption ; a peace in which men dare not converse aloud—in which literature grows puerile and trifling, because almost every subject of moment is made dangerous to be handled—in which the nobles are divided into two classes, the servile and the proscribed. We call this tyranny, in England ; and are we to say that resistance to tyranny is not to be discussed in English papers? Why, it is the problem of modern history, bow long Italy will endure her degrading oppression. Her Governments can have no claim on forbearance while that state of things lasts. Governments have no primary rights; the people alone have the rights; Governments only duties, and those rights which accrue from the responsibility of duties. This extreme sensitiveness was not shown, even by the Post, in the case of Greece, which has coerced its Government ; and the only difference between Greece and Italy is, that Italy has suffered longer and more grievously. But the Post says, that the free speaking of the Maltese press may compromise our foreign relations. What of that ? The press is not bound by the rules of diplomacy : it is not so in England or in France—witness the so recent war-incentives on both sides. The press is amenable to the law ; that law is open to the appeal of foreign governments ; and if the Malta papers have offended the Italian Princes, let their Highnesses seek redress in the courts of Malta or London. That is the way to test the right or wrong done by English journals—not to make them amenable to foreign laws, or, worse still, because more capricious and doubtful, the etiquettes of diplomacy.