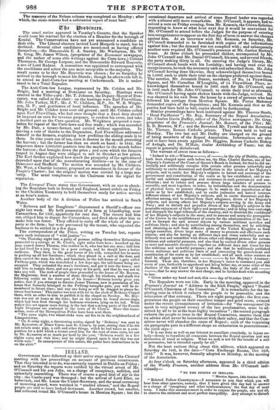 The usual notice appeared in Tuesday's Gazette, that the Speaker would issue his warrant for the election of a Member for the borough of Kendal. The Conservatives have not yet announced a candidate on their side. The Liberal electors invited Lord Morpeth to stand, but he declined. Several other candidates are mentioned as having offered themselves,—the Honourable E. A. Stanley, Mr. Warburton, Mr. W. R. Greg, Mr. James Wilson, (proprietor of the Economist newspaper, and the author of some able writings against the Corn-laws,) Colonel Thompson, Sir George Larpeut, and the Honourable Edward Bouverie, a son of Lord Radnor. A committee was appointed to correspond with the candidates and select the one most acceptable to the majority. The result seems to be that Mr. Bouverie was chosen ' • for on Saturday he arrived in the borough to meet his friends ; though he afterwards left it, to attend an Anti-Corn-law meeting at Cockermouth. He is under- stood to be a Total Repealer.

The Anti-Corn-law League, represented by Mr. Cobden and Mr. Bright, had a meeting at Doncaster on Saturday. Hustings were erected in the Tithe-yard : Mr. T. Johnson, the Deputy-Mayor of Don- caster, was called to the chair : on the hustings were Earl Fitzwilliam, Mr. John Parker, M.P., Mr. J. W. Childers, M.P., Mr. W. B. Wright- son, M. P., and gentlemen of local influence. The speeches of Mr. Bright and Mr. Cobden went over old ground ; until Mr. Cobden called upon Earl Fitzwilliam, iiho had once thought that a fixed duty should be imposed on corn for revenue purposes, to confess his error, and take a decided part on the Corn question. Mr. Wrightson proposed a reso- lution for repeal of the Corn-laws and free trade ; which was seconded by Mr. Dale, a tenant-farmer, and carried without opposition. In moving a vote of thanks to the Deputation, Earl Fitzwilliam addressed himself to the farmers, explaining how profitless the sliding-scale is to them. In nine years out of ten, corn is dearest in the month preceding the harvest; but the farmer has then no stock on hand : in 1842, the importers threw 3,000,000 quarters into the market in the month before the harvest ; that brought down the price ; and corn which the farmers reaped in August they were obliged to sell in October at low prices. The Earl further explained how much the prosperity of the agricultural depended upon that of the manufacturing districts—as in the case of Doncaster and Sheffield. The motion was seconded by Mr. Childers. Mr. West, a Chartist lecturer, proposed an amendment in favour of the People's Charter ; but the original motion was carried by a large ma- rority. The usual compliment to the Chairman was the signal for separation.

The Liverpool Times states that Government, with an eye to check- ing the Repealers both in Ireland and England, issued orders on Friday to the Cheshire Yeomanry to hold themselves ready for active service at an hoar's notice.

Another body of the A division of Police has arrived in South Wales.

" Rebecca and her Daughters " dispossessed a Sheriff's-officer one night last week. He held possession of a farm at Llandfeylog, near Carmarthen, for 1301., apparently for rent due. The rioters had him out, obliged him to depart for Carmarthen, and fired shots after him to make him run faster. They offered to carry off the whole of the pro- perty at the farm; but were prevented by the tenant, who expected the business to be settled in a few days.

The correspondent of the Times, writing on Tuesday last, reports more such instances of "wild justice "— " On Thursday night last, a party of persons calling themselves Rebeccaites proceeded to a cottage at St. Clear's, eight miles from here ; knocked up the man, named James Thomas, who resided in it, who has but one arm ; told him he had lived for a long time in a poor cottage, and he should have a better residence. They then, to the great terror of his wife, compelled her to assist in packing up all her iurniture; which they placed in a cart at the door, and then carried the man, his wife, and furniture, to the toll-house of a gate called Pwlltrap-gate, which was demolished a few days ago, the toll-house being un- occupied. They unloaded the man's furniture, and put it into the house, and told him to remain there, and not go away at his peril, and that he was not to take any toll. The mob of people then proceeded to the house of Mr. Be non, the Magistrate, fired a number of shots through his windows, and stuck the following notice on the door-post of his house—' Rebecca hereby gives you notice, that if you attempt to dismiss James Thomas, now in possession of the house that formerly belonged to the Pwlltrap-turnpike-gate, you will be re- membered in future time; and any one doing so will be dragged to pieces be- tween four horses.' This notice was sent with 4d. to the clerk of Bethany Chapel there, with an order to him to publish it in the chapel on Sunday. Mr. Bey- non was not at home at the time; but on his return he found eleven slugs, which had been fired through his bedroom-windows, lying on his bed. 'What makes this act appear more daring, is the fact that a strong party of the Fourth Light Dragoons are stationed in the town of St Clear's. Since this trans- action, some of the Metropolitan Police have been sent there. "The same night, two wheat-ricks were set fire to in the neighbourhood of Llangendeirne.

" On Sunday night, a threatening notice, signed by Rebecca,' was sent to Mr. Rynaston, of Blaen Corse, near St. Clear's, by post, stating that if he did not return some pigs, a calf, and other things, which he had taken as a com- position for a debt which a tenant owed him for the rent of some cows, let out ty Mr. Kynaston at so much per head by the year, ' Rebecca would in a few nights come and visit him; and he might depend upon it that this was not -words only." In consequence of this notice, the police have instructions to be on the alert."