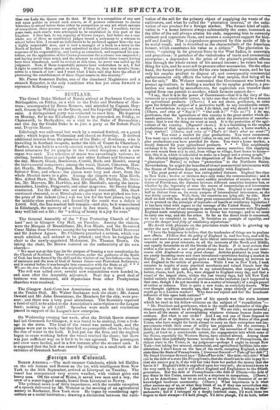 The Grand Duke Michael of Russia arrived at Buchanan Castle, in Stirlingshire, on Friday, on a visit to the Duke and Dutchess of Mon- trose; accompanied by Baron Brunow, and attended by Captain Mey- nell, Groom-in-Waiting on the Queen, and his Imperial Highness's own suite. A distinguished party was collected to meet him. He departed on Monday, for to see Edinburgh ; thence he proceeded, on Friday, to Chatsworth, in Derbyshire, on a visit to the Duke of Devonshire ; and this day the Grand Duke is to join a party at Sir Robert Peel's seat, Drayton Manor.

Edinburgh was enlivened last week by a musical festival, on a grand scale ; which began on Wednesday and closed on Saturday. It derived additional interest from the presence of the Duke of Bordeaux, who is travelling in Scotland incognito, under the title of Count de Chambaud. Farther, it was held in a newly-erected music-hall, said to be one of the finest structures for its purpose in the United Kingdom; and a new organ was used. The selection of music was exceedingly various ; in- cluding, besides Rossini and Spohr and other Italians and Germans of the day, Mozart, Gluok, Beethoven, Corelli, Bach, and Handel, among the instrumental composers ; among the vocal, Mozart, Cimarosa, Han- del, Haydn, Marcello, Pergolesi, Beethoven, Giovanni Porta, Wilbye, Salvator Rosa, and others : the pieces were long and short, from the whole Messiah down to a glee. Among the singers were Miss Birch, Mrs. Alfred Shaw, Mrs. Bushe, Miss Marshall, Mr. Phillips, Mr. Stret- ton, Mr. Manvers, Mr. Hawkins, and Mr. Marshall; among the instru- mentalists, Lindley, Dragonetti, and other magnates. Sir Henry Bishop conducted. Yet the affair was not altogether successful. Mrs. Shaw continued obscured, as at Birmingham ; the organ was pitched too low ; the price of the tickets (15s.) was too low for the best places, too high for middle-class pockets; and financially the result was a deficit of 2,0001. Still, the fine musical hall remains—and also, be it remembered in Edinburgh, the memory of a revel in fine music. Such a memory may well last out a life ; for " a thing of beauty is a joy for ever."

The General Assembly of the " Free Protesting Church of Scot- land" met in Glasgow City Hall, on Tuesday. Among the visitors, were the Marquis of Breadalbane, Mr. Fox Malik, and the Reverend Cesar Malan from Geneva; among the lay members, Sir David Brewster and Sir Andrew Agnew. Dr. Chalmers preached a sermon, which was much admired, and ordered to be printed ; and then he resigned the chair to the newly-appointed Moderator, Dr. Thomas Brown. On taking the chair, Dr. Brown insisted on the authenticity of his own church- " We meet not at this time for the purpose of framing a new constitution for the Church of Scotland. That constitution, under the guidance of the Spirit of God, has been framed by the skill and the wisdom of our forefathers—the men of eminence and the men of God of former times—our Protestant Reformers ; and it existed before it was brought into connexion with the State at all. * * * We are the true Church, that was originally recognized by the State." The roll was called over, several new commissions were handed in, and soon after the Assembly adjourned. Next day a good deal of business was transacted, and deputations from other Presbyterian churches were received.

The Glasgow Anti-Corn-law Association met, on the 12th instant, at the Trades Hall. Mr. Walter Buchanan took the chair ; Mr. James Oswald and Mr. John Dennistoun, the Members for the city, were pre- sent ; and there was a very good attendance. The Secretary reported a fund of 4271. to be added to the Association's subscription to the League fund; making in all 1,921/. Speeches were made and resolutions passed in support of the League's new enterprise.

On Wednesday evening last week, after the British Queen steamer had left Greenock for Glasgow, it was found to be sinking, from a leak- age in the stern. The head of the vessel was turned back, and the pumps were pat to work; but they had no perceptible effect in checking the rise of water in the hold. It had put out the fires, and the engines began to cease working before the vessel reached the shore ; but there was just sufficient way on it for it to be run aground. The passengers and crew were landed, and in a few instants after the steamer sank. It is supposed that the leak was caused by striking on a small rock at the entrance of Greenock harbour.