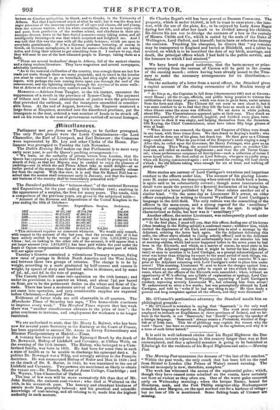 Parliament met pro forma on Thursday, to be further prorogued. The only Peers present were the Lords Commissioners—the Lord Chancellor, the Earl of Liverpool, and Earl Delay' arr ; the Commons were represented by Mr. Ley and other Clerks of the House. Par- liament was prorogued to Tuesday the 14th November. The Dublin Evening Mail makes out that Parliament is to meet very early next year, to suit the Queen's yachting arrangements !—

" We learn, on the authority of private letters from London, that the Queen has expressed a great desire that Parliament should be prorogued in the month of July, so that her Majesty may be enabled to enjoy the pleasure of yachting—one in which she and Prince Albert take so much delight—at an earlier period of the season than that at which official duties generally release her from the capital. With this view, it is said that Sir Robert Peel has re- solved that the session shall commence early in January, and that the import- ant business of the country shall be immediately proceeded with."

"This statement requires no comment whatever. We would only remark, with respect to the account of the last year, that the revenue side of it has been unduly swelled by the receipt of a large sum (viz. 1,315,2090 from China : but, on looking to the other aide of the account, it will appear that a yet larger amount (viz. 1,615,5070 has been paid within the year under the heads of Opium-compensation or China-expenditure, the greater part of which will not again recur."

Tuesday's Gazette contained a voluminous Treasury warrant, fixing new rates of postage in British North America and the West Indies, and between those two groups of colonies. The charge is to be by weight, according to a scale graduated by half-ounces and ounces in weight, by spaces of sixty and hundred miles in distance, and by sums of 2d., 4d., and 8d. in the rate of postage.

The Canada Corn-bill came into operation on the 10th instant; and under its provisions ls. a quarter on wheat, and about 7id. per barrel on flour, are to be the permanent duties ou the wheat and flour of Ca- nada. There has been a moderate arrival of Canadian flour since the act came into operation, and very considerable supplies are expected before Christmas.—Liverpool Times.

Evidences of Letter trade are still observable in all quarters. The Manchester Times of Saturday last says, "The home-trade continues to improve every week." The Hereford Times reports that last week there was "another simultaneous advance in the price of iron "; the price continues to increase, and employment for workmen is no longer restricted.

We are authorized to state, that Mr. Henry L. Bulwer, who has been now for several years Secretary to the Embassy at the Court of France, has been appointed to succeed Mr. Aston as Envoy Extraordinary and Minister Plenipotentiary at Madrid.— Times. A vacancy has been created in the Episcopal Bench by the death of Dr. Bowstead, Bishop of Lichfield and Coventry, at Clifton Wells, on the evening of the 11th instant. The Bishop, who belonged to a Cum- berland family, was horn in 1801. He had been for some time in such a slate of health as to be unable to discharge his episcopal duties. In politics Dr. Bowstead was a Whig, and strongly adverse to the Puseyite doctrines. He was consecrated Bishop of Sodor and Man in 1838 ; and on the death of Dr. S. Butler, in 1840, he was translated to the see of Lichfield and Coventry. Two persons are mentioned as likely to obtain the vacant see—Dr. French, Master of Jesus College, Cambridge ; and Dr. Wynter, Vice-Chancellor of Oxford. The loss of few men will be more extensively felt than that of Mr. John Buddle, the eminent coal-viewer ; who died at Wallsend on the 10th, in his seventieth year. The honesty and abundant kindness of nature made him generally beloved; and his practical and scientific knowledge of coal-mining, and all relating to it, made him the highest authority in such matters. The Standard publishes the " balance-sheet " of the national Revenue and Expenditure, for the year ending 10th October 1843; exulting in the appearance of a surplus, the first for many years. The totals, with a comparison of the previous years, are given in the subjoined table- " Account of the Revenue and Expenditure of the United Kingdom in the year ending the 10th of October— Income. Expenditure. Surplus. Deficiency. £ £ £ £ 1837 46.161,148 467(6.796 .... 544,626 1838 96,873,677 47,669,514 ....

Sir Charles Bagot's will has been proved at Doctors Commons. The property, which is under 16,0001., is left in trust to executors ; the inte- rest, with the use of the plate, &c., to be enjoyed by Lady Anne Bagot during her life, and after her death to be divided among his children. He directs his son not to divulge the contents of a box in the custody of Messrs. Childs and Co., which is sealed by the seals of the Duke of Wellington, Lord Oxford, and himself; but to burn or otherwise destroy the contents. Touching his obsequies, he directs that "my remains may be transported to England and buried at Blithfield, and a tablet be erected, on which is to be inscribed the date of my birth, marriage, and death, the principal offices which I had held in the public service, and the honours to which I had attained."

We have heard on good authority, that the batta-money or prize- money arising from the ransom of Canton will be paid in the course of the ensuing month ; orders having been already issued to the Trea- sury to make the necessary arrangements for its distribution.—. Standard.

On the authority of a letter from a naval officer, the Standard gives a capital account of the closing ceremonies of the Nankin treaty of peace- " At five p. m., the Captains in full dress (thermometer 100) met at Govern- merit House ; all the troops, officials, and public being present to witness the ratification of the treaty of peace ; which was done in great form, under salutes from the forts and ships. The Chinese did not seem to care about it, but it was some comfort to us to find that they felt the heat as much as we did ; but when dinner came the scene was different. We sat down in white jackets, about fifty. The Commissioners appeared quite at their ease. They drank an enormous quantity of wine ; chatted, laughed, and finished every glass, turn- ing it over to show it was empty, and helping themselves from the decanters. Old Keying, the Chief Commissioner, must have taken fifty large glasses of wine at least.

" When dinner was removed, the Queen and Emperor of China were drunk in one toast, with three times three. We then drank to Keying's health; who would not be done out of his glass, but drank too. He then gave us a Chinese song—such noises! What do you think of the Emperor's uncle singing a song? After this, he called upon the Governor, Sir Henry Pottinger, who gave us an English song. Then Wang, the second Commissioner, gave its another Chi- nese one, and called on another Englishman ; and then the old Tartar Gene- ral; whose performance surpasses all description—such a collection of noises I never beard before. He then called on Lord Saltoun, who gave us a jolly song; when old Keying commenced again ; and so passed the evening, till near eleven o'clock ; the old fellows taking wine enough for six at least, and walking off pretty steady."

More stories are current of Lord Cardigan's vexatious and imperious conduct to the officers under him. The account of his placing Lieute- nant H. under arrest, for demurring when ordered to fetch back a horse, is again said to be substantially correct ; though some inaccuracies of detail were made the pretext for a general declaration of its being false. An extract of a letter published by the Times relates another act of a similar kind. " On the same day as Lieutenant H.'s arrest, an older officer complained in writing to General Wyndham of Lord Cardigan's language in the drill-field. The only redress was the assembling of the officers in the mess-room, and a strong reproof for the unmilitare proceeding of complaining to the General on the spot. It might be characterized as futile, but how was it nnmilitary ? ' " Another officer, the senior Lieutenant, was subsequently placed under arrest for being late at stables-

" In the first place, I must tell you, that this officer, finding one of his horses (then breaking in the Riding-school) a confirmed roarer ; withdrew him, which excited the displeasure of the Earl, and caused him to send a message by the Adjutant, ordering the horse back again. On the Adjutant delivering this order, the officer above alluded to (being orderly officer) said to the Adjutant that it was very unlucky, as he had unfortunately been ten minutes too late at morning-stables, which had never happened before in the seven years he had been in the Eleventh, and which, as a matter of course, he must state in his report. The Adjutant suggested that it might be better for him (the Adju- tant) at once to mention it to Lord Cardigan, as a prompt acknowledgment of error was better than delaying its report to the usual period of such things, viz. the going off duty. This was thankfully acceded to: but conceive W.'s sur- prise at the Adjutant returning with Lord Cardigan's order to place him under arrest! This morning, Lieutenant W. sent to know the charges against him; but received no answer, except an order to repair at two o'clock to the mess- room, where all the officers of the Eleventh were assembled; when, without an opportunity of W.'s offering one syllable of explanation or apology, Lord Car- digan read a letter from General Wyndham, approving of Lord Cardigan's conduct, reproving severely Lieutenant W., but releasing him from arrest! W. endeavoured to utter a few words; but was peremptorily silenced by Lord Cardigan, and told to write if he had any thing to say.' He then made a general and long complaint against all the officers, and they were dismissed."

" Mr. O'Connell is mistaken in saying that Sassenach ' is the only word in the Irish language to signify an Englishman. The word most commonly employed to indicate an Englishman in three provinces of Ireland, and we be- lieve iu the fourth, is not Sassenach,' but Bearle '—properly the speaker of a foreign language. 'Sassenach ' always means a Protestant, whether of Eng- lish or of Irish race. This bit of philology may explain the reason why the word ' Saxon' has been so constantly employed. iu the agitation, and why it is a term of such bitter hatred."

It is said in well-informed circles that his Royal Highness the Due de Bordeaux intends sojourniug in Ibis country longer than was at first contemplated, and that a splendid mansion is going to be furnished at Edinburgh for the residence of his Royal Highness and suite.—Morning Post.

The Morning Post announces the decease of "the last of the coaches." " Within the past week, the only coach that has been left on the road from Bristol to London (the Prince of Wales) ceased running. The railroad monopoly is now, therefore, complete." The week has witnessed the access of the equinoctial gales ; which, though they have caused some mischief on the coasts, have certainly not been so violent as they often are. One of the worst gales occurred early on Wednesday morning ; when the barque Emma, bound for Honduras, sank, and the Port Phillip emigrant-ship Burhampooter stranded, near Margate, on the spot marked out for a harbour of refuge : but no loss of life is mentioned. Some fishing-boats of Cromer are missing.