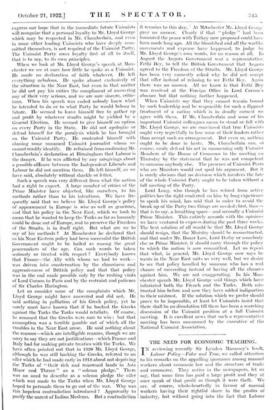 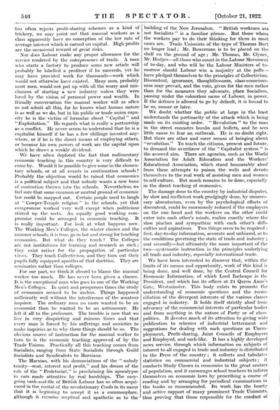 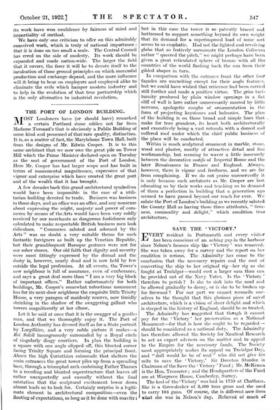 THE NEED FOR ECONOMIC TEACHING.

IN reviewing recently Sir Lynden Macassey's book, Labour Policy—False and True, we called attention to his remarks on the appalling ignorance among manual workers about economic law and the structure of trade and commerce. They notice in the newspapers, let us say, that some firm has paid a large profit and they at once speak of that profit as though it were theft. We are, of course, whole-heartedly in favour of manual workers having their rightful share in the profits of industry, but without going into the fact that Labour too often rejects profit-sharing schemes as a kind of trickery, we may point out that manual workers as a class apparently have no. conception of the low rate, of average interest whichis earned on capital. High profits are the occasional reward of great risks.

Nor does Labour make any proper allowance for the service rendered by the entrepreneurs of trade. A man who starts' a factory to produce some new article will probably be labelled a profiteer if he succeeds, yet he may have provided work for thousands—work which would not otherwise have existed. Many men, probably most men, would not put up with all the worry and mis- chances of starting a new industry unless they were lured by the vision of personal power and wealth. In friendly conversation the manual worker will as often as not admit all this, for he knows what human nature is as well-as we do, but in his public or trade union capa- city he is the victim of formulae about. " Capital " and "Exploitation." He regards what is really a partnership as a conflict. He never seems to understand that he is a capitalist himself if he has a :few shillings invested any- where, or if he is the direct means of employing others, or because his own powers of work are the capital upon which he draws a weekly dividend.

We have often deplored the fact that rudimentary economic teaching in this country is very difficult to come by. Would it be possible to.give some in the elemen- tary schools, or at all events in continuation schools ? Probably the objection would be raised that economics is a political subject and that nobody wants a new bone of contention thrown into the schools. Nevertheless; we feel sure that some common or neutral ground of economic law could be mapped out. Certain people used to laugh at " Cowper-Temple religion " in the schools, yet that compromise worked very well except when politicians stirred up the sects. An equally good working corn- promise could be arranged in economic teaching. It is really important. For look at what happens now. The Working Men's- Colleges, the winter classes and the summer schools, it is true, go in hot and strong for teaching. economics. But what do they teach ? The Colleges are not institutions for learning and research as such ; they exist rather for• the propagation of particular views. They teach Collectivism, and they turn out their pupils fully equipped apostles of that doctrine. They are seminaries rather than colleges.

For our part, we think it absurd to blame the manual worker too much. He has never been given a chance. It is the exceptional man who goes to one of the Working Men's Colleges. In quiet and prosperous times the study of economies seemed to be useless. Things happened sufficiently well without the interference of the amateur inquirer. The ordinary man no more wanted to be an economist than he wanted to be an astronomer. He left it all'to the professors. The trouble is now -that we live in very disquieting• and ruinous times and that every man is forced by- his sufferings and anxieties to make inquiries as to why these things should- be so. The obvious source of instruction for the manual worker to turn to is the economic teaching approved of by the Trade Unions. Practically all this teaching comes from Socialists; ranging from State Socialists through Guild. Socialists and Syndicalists to Marxians.

The Marxian, with his denunciations of the " unholy trinity—rent, interest and profit," and his dream of the rule of the " Proletariat," is proclaiming his apocalypse in ears made attentive by real hardships. The easy- going rank-and-ffie of British Labour has so often acqui- esced in the recital of the revolutionary Credo in its name that it is beginning to accept it as a commonplace, although it remains sceptical and apathetic as to the building of the New Jerusalem. ".British workmen are not Socialists " is a familiar. phrase. But those whom the workers pay to do their thinking for them in most cases are. Trade Unionists of the 'type of Thomas Burt no longer lead ; Mr. Bowerman is to be placed on the shelf on the ground of age ; Mr. Thomas, Mr. Clynes, Mr. Hodges—all those who count in the Labour. Movement of to-day, and who will he the Labour Ministers of to- morrow should Labour win a majority at the polls—. have pledged-themselves to the 'principles of Collectivism. Discontent, ignorance, thoughtlessness, class,eonscious- ness may prevail, and the vote, given for the-men rather than for the measures they advocate; place Socialism, passing under the colourless name of Labour, in power. If the defence is allowed to go by default, it is bound to be so, sooner or later.

We doubt whether the. public at large in the least understands the pertinacity of the: attack. which is being made on its existing order. " Revolution " to the .man in the street connotes hombs and bullets, and he sees little cause to fear an, outbreak. He is no, doubt .right. But there are other and surer means of bringing about "revolution." To teach the citizens, present-and-future, to demand the overthrow of, the ".Capitalist system " is the avowed aim. There 'are agencies, such as- the World Association for Adult Education and. the Workers' Educational Association, which stand honourably aloof from these attempts, to poison the wells and devote themselves to the -real work of assisting men and women to self-culture. But 'much: remains to be done, especially in the direct teaching of economics.

The damage done to the country by industrial disputes, by slow and inefficient work grudgingly done, by unneces- sary absenteeism, even by the psychological effects of discontent, could be enormously reduced if the employers on the one hand and the workers on the other could enter into each other's minds, realize exactly where the shoe pinches and sympathize with each other's diffi- culties and aspirations. Two things seem to be required : first; day-to-day information, accurate and unbiased, as to the conditions governing the state of trade and industry ; and secondly—but ultimately the more important of the two—systematic instruction in the principles underlying all trade and industry, especially international trade.

We have been interested to discover that, within the limits of its means and opportunity, work of this kind is being done, and well done, by the Central Council for Economic Information, of which Lord Inchcape is the President, and which has its offices at 24 Queen Anne's Gate, Westminster. This body- exists to promote the understanding of economic questions and the recon- ciliation of the divergent interests of the various-classes engaged in industry. It holds itself- strictly aloof -front advocacy of the commercial interests of particular bodies and from anything in the nature of Party or of class- politics. It devotes much of its attention to giving wide publication to schemes of industrial betterment and suggestions for dealing with such questions as Unem- ployment, Profit-sharing, Joint Councils of Employers and Employed, and such-like. It has a highly developed news service, through which information on subjects of interest to all engaged in trade and industry is distributed to the Press of the country ; it collects and -tabulates statistics on commercial and industrial subjects ; it conducts Study Classes in economics in the great -centres of-population, and it -encourages school teauhers-to inform themselves on economic laws by - pi est:Jibing a course of reading-and by arranging for periodical examinations in the books so recommended. Its work has the hearty and active support of many prominent Trade Unionists, thus proving that. those responsible for the conduct of its work have won confidence by fairness of mind and .impartiality of method. We ha.ve only one criticism to offer on this admirably conceived work., which is truly of national importance : that it is done ontoo small• a, scale. The Central-Council has erred on the side of modesty. Its work should be expanded and made nation-wide. The larger the field that it covers, the freer it will be to devote itself to the inculcation of ground principles- on which successful production and exchange depend, and the more influence will it- bring to bear on employers and employed alike to eliminate the evils which hamper modern industry and to help in the evolution of that true partnership which is the only alternative to industrial revolution.