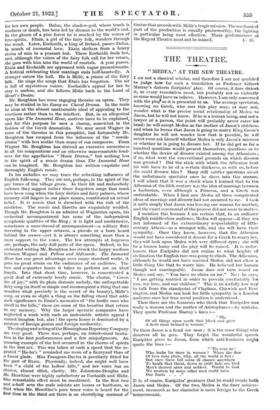 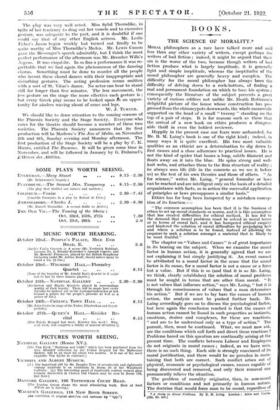 I AM not a classical scholar, and therefore I am not qualified

to judge haw far such a translation- as Professor Gilbert Murray's. distorts Euripides' play. Of course, it does distort• it,. as every translation must, but probably not so violently as some would have us believe. However, I am only concerned with the pla?as it is presented to us. The average spectator, knowing no Greek, who: sees this play may, or may .not, wonder what. is the precise social relationship of Medea to Jason:, but he will not know. If he is a human being, and not a lawyer or a parson,. the point- will probably never enter his head: he will accept Medea, as the mother of Jason's children, and when he learns that Jason is going to marry King, Creon's daughter he will not wonder how that is possible, he will never evenesk.himself whether Medea is only Jason's mistress or whether he is going; to divorce her. If he did get so far a hundred questions would present themselves, questions as to whether the device of divorce existed among the Athenians ; if so, what were the conventional grounds on. which divorce-, was granted ? Did the stick with which the Athenian beat his wife have to be of a certain thickness, as with us, before she could divorce him ? Many still subtler questions await

the unfortunate spectator once he dives into this morass.. I will admit that it was a shock when I learned that to the Athenian of the fifth century n.c. the idea of marriage between- a barbarian, even although a Princess, and- a Greek was unthinkable. When I first saw Medea all these complicated- ideas of marriage and divorce had not occurred to me. I took it quite simply that Jason was leaving one woman for another, and the exact ceremonial of the process did not seem to matter., I mention this because I am certain that, to an ordinary English middle-class audience, Medea will appear—if they are

not informed of the extraordinary respectability of fifth- century Athens—as a wronged wife, and she will have their sympathy. Once they know, however, that the Athenian would not have considered it decent for a Greek to marry her, they will look upon Medea with very different eyes ; she will' be a brazen hussy and- the play will be ruined. It is unfor- tunate that Euripides did not realize to what heights of civilization the' English race was going to climb. The Athenian, although he would not have married Medea, did not allow a little thing like that to worry him. He believed• her human; though not marriageable. .Jason does not turn round on Medea and say, " You have no claim on- me." No ; he says, `‘ I am getting married in order to provide comfortably for you, my love, and our children." This is an awfully low way' to talk from- the standpoint of Clapham, Chiswick and Ken- sington, and Medea can look for little sympathy in a London audience once her true social position is understood.

Then there are the feminists who think that Euripides was' really a woman and.the mother of Aristophanes—by mistake. They quote Professor Murray's lines " Oh,

Of all things upon earth that bleed and grow A herb. most bruised is woman."

To them Jason is a fiend (or man ; it is the same thing) who deserves all he gets. They forget. the wonderful speech Euripides gives to Jason, from which anti-feminists mightl

" 'Tis ever so ! Who looks for more in women ? When the flow Of love runs plain, why, all the world is fair : But once there fall some ill chance anywhere To baulk that thirst, down in swift hate are trod Man's dearest aims and noblest. Would to God We mortals by some other seed could raise Our fruits . . ."

It is, of course, Euripides' greatness that he could create both Jason and Medea. Of the two, Medea is the finer achieve- iment, inasmuch as her character is more foreign to the Greek temperament. The play was very well acted. Miss Sybil Thorndike, in spite of her tendency to drag out her vowels and to excessive gesture, was adequate to the part, and it is doubtful if one could say that of any other English actress. Mr. Leslie Faber's Jason began weakly but turned out finally to be quite worthy of Miss Thorndike's Medea. Mr. Lewis Casson gave the Messenger's speech admirably, but I think the most perfect performance of the afternoon was Mr. Brember Wills's Aegeus. It was exquisite. In so fine a performance it was re- grettable that we had again the phenomenon of the dancing chorus. Something must be done to murder all the people Who invent these choral dances with their inappropriate and disturbing gestures. The acting profession seems smitten with a sort of St. Vitus's dance. No actor can bear to stand still for longer than five minutes. The less movement, the less gesture on the stage the more effective each gesture is ; but every Greek play seems to be looked upon &s an oppor- tunity for aimless waving about of arms and legs.

We should like to draw attention to the coming seasons of the Phoenix Society and the Stage Society. Everyone who cares for the theatre should become a member of these two societies. The Phoenix Society announces that its first production will be Marlowe's The Jew of Malta, on November 5th and 6th, Sunday evening and Monday afternoon. The first production of the Stage Society will be a play by C. K. Munro, entitled The Rumour. It will be given some time in November, and will be followed in January by G. Duhamel's Valuvre des Athletes.