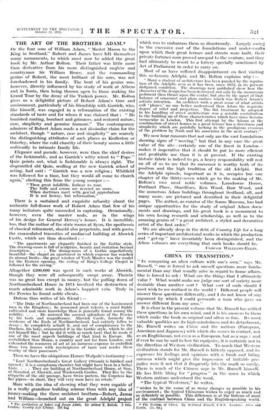 THE ART OF THE BROTHERS ADAM.* OF the four sons

of William Adam, " Master Mason to the King, in Scotland," Robert and James have left themselves many monuments, to which must now be added the great book by Mr. Arthur Bolton. Their father was little more than derivative from his more distinguished confrere and countryman Sir William Bruce, and the commanding genius of Robert, the most brilliant of his sons, was not

foreshadowed in his family. The bent of his genius was, however, directly influenced by his study of work at Athens and in Ionia, then being thrown open to those making the Grand Tour by the decay of the Turkish power. Mr. Bolton gives us a delightful picture of Robert Adam's time and environment, particularly of his friendship with Garrick, who, like himself, was engaged in a reformation of the existing standards of taste and for whom it was claimed that : " He banished ranting, bombast and grimaces, and restored nature, case, simplicity and genuine humour." The contemporary admirers of Robert Adam made a not dissimilar claim for the architect, though " nature, ease and simplicity" are scarcely the distinguishing attributes of such places as Kedleston or Osterley, where the cold chastity of their beauty seems a little unfriendly to intimate family life.

Elegance and parade, however, were then the chief desires of the fashionable, and as Garrick's witty retort to " Pope " Quin points out, what is .fashionable is always right. The disgruntled old Quin, scoffing at the new Garrick school of acting, had said : " Garrick was a new religion ; Whitfield was followed for a time, but they would all come to church

again," eliciting this from the young usurper :- "Thou great infallible, forbear to roar, Thy bulls and errors are revered no more. When doctrines meet with gen'ral approbation It is not heresy, but reformation."

There is a sustained and exquisite urbanity about the authentic full-flower work of Robert Adam that few of his many imitators quite succeeded in capturing. Occasionally, however, even the master nods, as in the wings of his design for General Hervey's house. It is incredible, too, that the author of the state rooms at Sy-on, the apotheosis of classical refinement, should also perpetrate, and with gusto, the emasculated travesties of mediaeval building at Alnwick Castle, which are thus described :--

" The apartments are elegantly finished in the Gothic style. The drawing-room is full of sculpture, beauty and imitation beyond description. . . . The dining-room of a Gothic superlatively beautiful—the chapel an apartment in which expense has reached its utmost limits—the great window of York Minster was the model for the Eastern opening, the ceiling of King's College Chapel is followed for the coving."

Altogether £200,000 was spent in such works at Alnwick, though they were all subsequently swept away. Therein was no great loss except in money, but the pulling down of Northumberland Houie in 1874 involved the destruction of much admirable work in Adam's happiest vein. Truly in the Percies he found noble clients.

Dutens thus writes of his friend

" The Duke of Northumberland had been one of the handsomest men in the Kingdom ; he possessed great talents, a mind highly cultivated and more knowledge than is generally found among the nobility. . . . He restored the ancient splendour of the Percies by his, taste and magnificence. Alnwick Castle, formerly the residence of the Earls of Northumberland, had entirely fallen to decay ; he completely rebuilt it, and out of complaisance to the Duchess, his lady, ornamented it in the Gothic style, which he did not himself like ; but he did it with so much taste that he made it one of the most superb buildings of that kind in Europe. He embellished Sion House, a country seat not far from London, and exhausted the resources of art at an immense expense to embellish those two houses with masterpieces of taste and render them worthy of their possessors."

Then we have the ubiquitous Horace Walpole's testimony :— "Lord Northumberland's Great Gallery (Strand) is finished and opened ; it is a sumptuous chamber but might have been in a better taste. . . . They are building at Northumberland House, at Sion, at Stansted, at Alnwick, and Warkworth Castles. They live by the etiquette of the old peerage, have Swiss porters, the Countess has her pipers—in short., they will very soon have no estate."

More with the idea of showing what they were capable of in a really grandiose building scheme than with any idea of money-making the three architect brothers—Robert, James and William—launched out on the great Adelphi kroj ect e- • The Architoture of Robert atifif Ackibit 11y Arthur Bolton, 2 Yob.London: Country Life Libtary. 8 84

which was to embarrass them so disastrously. Largely owing to the excessive cost of the foundations and under-vaults upon which their great terrace and streets were built, their private fortunes soon proved unequal to the venture, and they had ultimately to resort to a lottery specially sanctioned by Act of Parliament in order to carry on.

Most of us have suffered disappointment on first visiting this so-famous Adelphi, and Mr. Bolton explains wily :—

" Many a student of architecture has been puzzled by the reputa- tion of the Adelphi, seen as it has been, since 1872, in its present disfigured condition. The drawings now published show how the character of the design has been destroyed, not only by the monstrous pediment then thrust upon the centre, but also by the upset of that balance of ornament and plain surface which was Robert Adam's artistic intention. An architect with a great sense of what artists call ' planes,' no one better understood than Adam the requisite degree of relief and projection. The flat treatment he adopted in his handling of street architecture was a notable contribution to the building up of those characteristics which have since become vernacular in London. This first attempt by the Adams at the combination of street houses in a great terrace has a directness and simplicity which are painfully lacking in the prodigious evasions of the problem by Nash and his associates in the next century."

We now hear rumours that not only are the vast foundations showing signs of " moving," but that in any case the great value of the site--certainly one of the finest in London— makes it imperative that it should be put to more efficient and profitable use than it is at present. If the existing historic fabric is indeed to go, a heavy responsibility will rest on all of us to see that its successor is worthy both of its position and the high tradition of the old Adelphi. But the Adelphi episode, important as it is, occupies but one chapter of the thirty-seven which go to the making of Mr. Bolton's two most noble volumes. Lansdowne House, Portland Place, Shardiloes, Ken Wood, Bow Wood, and the numerous Adam buildings throughout Scotland, all, and many more, are pictured and described in their delightful pages. The author, as curator of the Soane Museum, has had unique opportunities for the study of original Adam docu- ments and drawings, and his great book is a monument to his own loving research and scholarship, as well as to the amazing genius of " a great architect, a stylist and decorative artist of the first order."

We are already deep in the debt of Country Life for a long series of important architectural works in which the production and " get-up " have invariably been distinguished, and the Adam volumes arc everything that such books should be.