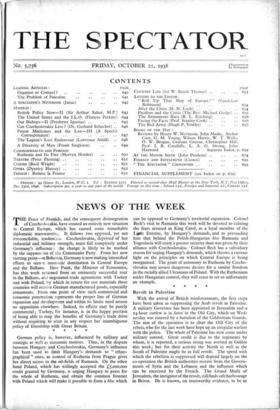 THE. Peace of Munich, and the consequent disintegration of Czechoslovakia, have created an entirely new situation in Central Europe, which " has caused some remarkable diplomatic manoeuvring. It follows two opposed, yet not irreconcilable; tendencies. Czechoslovakia, deprived of her industrial and military strength, must fall completely under Germany's influence ; the change is likely to be marked by the supprest on of the Communist Party. From her new starting point—in Bohemia, Germany is now making intensified efforts to secu-e " economic domination in Central Europe and the Balkans. Herr :Punk, the Minister of Economics, has this week returned from an eminently successful tour in the Balkans, and negotiated trade agreements with Turkey and with Poland, by which in return for raw materials these countries will receive German manufactured goods, especially armaments. From one, point of view such commercial and economic penetration represents the proper line of German expansion and development and within its limits need arouse no oppoSition elsewhere. Indeed, its effects may be purely commercial ; Turkey, for instance, is in the happy position of being able to reap the benefits of Germany's trade drive without requiring to alter in any respect her unambiguous policy of friendship with Great Britain. * * * *