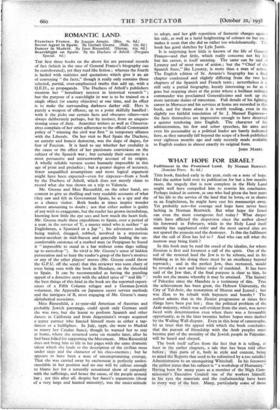 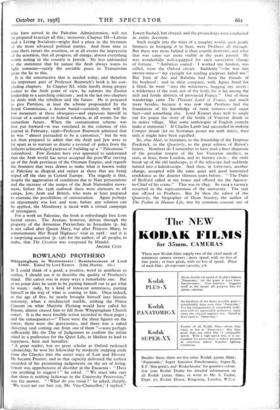 Tars book, finished early in the year, ends on a note' of hope. Had the author held over its publication, for but .a. few months more, the :tragedy that is. now complete in the--Holy :Land might well have compelled him. to rewrite his conclusion. Perhaps indeed in sorrow, as one who had given the bestyears of his life. to the service of the land that he loves, -or in-shame as an Englishman, he-:might have. cast • his. manuscript. away. Yet probably not-4or courage and hope have never been lacking in Norman Bentwich. But what hope _ for Israel can even the. most courageous feel today ? What deeper trials have -afflicted the dispersion -since . the author closed his foreword in February, while in the Holy Land ,itself anarchy has supplanted order and the most sacred sites are not spared the assassin and thedestroyer. Is this the fulfilment that the call of Zion has led to ? And who: can tell. what the morrow may. bring forth ?

In this book may be read the creed of the idealist, for whom Zionism is first and foremost a call of the spirit. Out of the soil of the restored land the Jew is. to be reborn; and in his thinking as in his doing there must be an excellency beyond reproach ; and in the, perfect_ Jew, thus recreated,: would be revealed a new and better order of mankind. It has been said of the Jew that, if the final purpose is clear to him, he reeks not the means whereby it may be attained. The history

of Palestine since the Mandate is a testimony of-this. True the achievement has been great, the Hebrew University, the City of Tel-Aviv, the restoration of Sharon and Jezreel ; but was Zion to be rebuilt with bayonets and bombs ? The author admits that in the Zionist programme at dines first things have been put last ; thus the political problem of the Arab majority, which was self-evident from the start, was never

faced with determination even when there was a favourable opportunity, as in the later twenties before hopes were dashed

by the Wailing Wall dispute. Even in this hour of catastrophe, let us trust that the .appeal with which the book concludes, that - the pursuit of friendship with the Arab peoples must beciime part of the morality of the Jewish people in Palestine, will be heard and obeyed. "

The book itself suffers from the fact that it is telling; at least in the earlier chapters, a tale that has been told often

before? Patti of it, both in style and content, bring

to minis the RePorts that used to be submitted by a too satisfied -Administration to an unenquiring-White.hall. In his foreword

the author states that his subject is " a workshop of Hintiaiiity " Having been fOr "many years as a member of the High Com- mi:ssioner's Executive Coinicil one of the . workers himself,

in hial eyes the inineriali arid the craftsinatiship- have been in 'every way of the best: .Mini; particularly some of those who have served in the Palestine Administration, will not be prepared to accept all this; moreover, Chapter III—Labour and a Living Socialism—might find a place in the literature of the more advanced political parties. And from time to time there recurs the assertion, or at all events the impression of the assertion, that all progress, all energy, almost everything worth noting in the country is Jewish. No less unfounded is the statement that by nature the Arab always wants to fight someone—surely the enviable peace in Transjordan gives the lie to this.

It is the constructive that is needed today, and therefore the important part of Professor Bentwich's book is his con- cluding chapters. In Chapter XI, while hardly doing proper justice to the Arab point of view, he submits the Zionist leadership to a searching criticism ; and in the last two chapters he deals with the rebellion and the future. He is prepared to give Partition, at least the scheme propounded by the Royal Commission, a decent burial—certainly there will be few mourners at these obsequies—and expresses himself in favour of a cantonal or federal solution, at all events for the immediate future. When the cantonisation scheme was first put forward—it was ventilated in the columns of this journal in February, 1936—Professor Bentwich admitted that he was " almost persuaded to be a cantoniser," but he was not then prepared to admit that the Arab and Jew were so far apart as to warrant so drastic a reversal of policy from the hitherto acknowledged purpose of building up a " Palestinian " nationhood. Few Zionists have ever appeared to understand that the Arab world has never accepted the post-War carving up of the Arab provinces of the Ottoman Empire, and regards the frontiers that were drawn to make what is known today as Palestine as illogical and unjust as those that are being wiped off the slate in Central Europe. The tragedy is that,

I despite the aggravation of conditions due to Nazi persecutions and the increase of the tempo of the Arab Nationalist move- ment, before the 1936 outbreak there were elements in all camps, Jew, Arab and British, who were at least prepared to examine the possibilities of cantonisation. Again perhaps an opportunity was lost and now, before any solution can be applied, the Mandatory is faced with a virtual campaign of reconquest.

For a work on Palestine, the book is refreshingly free from

factual errors. The Avenue, however, driven through the property of the Armenian Patriarchate in Jerusalem (p. 69) is not called after Queen Mary, but after Princess Mary, to commemorate Her Royal Highness' visit in 1928: and it is a surprising assertion (p. 136) for the author, of all people, to make, that The Creation was composed by Handel.