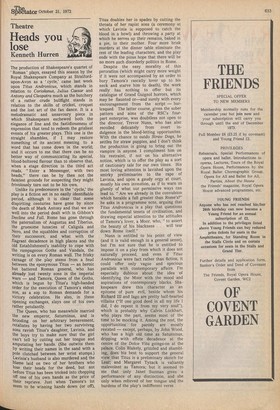 The production of Shakespeare's quartet of 'Roman' plays, essayed this season by the Royal Shakespeare Company at Stratfordupon-Avon as a 'cycle,' came last week upon Titus Andronicus, which stands in relation to Coriotanus, Julius Caesar and Antony and Cleopatra much as the butchery of a rather crude bullfight stands in relation to the skills of cricket, croquet and the lost art of the fan dance. It is a melodramatic and unsavoury piece in Which Shakespeare eschewed both the elegance of line and the fastidiousness of expression that tend to redeem the grisliest events of his greater plays. This one is the straight shambles, if I may restore something of its ancient meaning to a word that has come down in the world; and it occurs to me that there can be no better way of communicating its special, blood-boltered flavour than to observe that, when a stage direction in the third act reads, "Enter a Messenger, with two heads," there can be by then not the faintest grounds for suspecting they might frivolously turn out to be his own.

Unlike its predecessors in the 'cycle,' the play is a fiction set in no easily identifiable period, although it is clear that some dispiriting centuries have gone by since the death of Mark Antony and that we are well into the period dealt with in Gibbon's Decline and Fall. Rome has gone through the paternalism of Augustus and Tiberius, the gruesome lunacies of Caligula and Nero, and the squabbles and corruption of their successors, and what with the flagrant decadence in high places and the old Establishment's inability to cope with the rampageous Goths and Vandals, the writing is on every Roman wall. The frisky carnage of the play stems from a feud between the eponymous Titus — an heroic but battered Roman general, who has already lost twenty sons in the imperial wars — and Tamora, Queen of the Goths, Which is begun by Titus's high-handed order for the execution of Tamora's eldest son, as a sop to Roman demands for a victory celebration. He also, in these Opening exchanges, slays one of his own rather petulantly.

The Queen, who has meanwhile married the new emperor, Saturninus, and is brooding on her arbitrary bereavement, retaliates by having her two survivivng sons ravish Titus's daughter, Lavinia, and the boys try to make sure that the girl can't tell by cutting out her tongue and amputating her hands. (She outwits them by Writing their names in the sand with a pole clutched between her wrist stumps.) Lavinia's husband is also murdered and, the blame laid on two of her brothers who lose their heads for the deed, but not before Titus has been tricked into chopping off one of his own hands as the price of their reprieve. Just when Tamora's lot seem to be winning hands down (or off), Titus doubles her in spades by cutting the throats of her rapist sons (a ceremony at which Lavinia is supposed to catch the blood in a bowl) and throwing a party at which he serves up their remains, baked in a pie, to their mother. Four more brisk murders at the dinner table eliminate the rest of the leading characters, and the play ends with the pious hope that there will be no more such disorderly politics in Rome.

Despite the easy morality of this peroration (which might carry more weight if it were not accompanied by an order to bury Tamora's rascally lover up to his neck and starve him to death), the work really has nothing to offer but its catalogue of Grand Guignol horrors, which may be flaunted or—and surely with every encouragement from the script — burlesqued. The latter course, given the sober pattern and aims of the RSC's fourpart enterprise, was doubtless not open to the director, Trevor Nunn, who has also recoiled delicately from overt indulgence in the blood-letting opportunites. With the chance to outdo Straw Dogs, he settles for straw puppies, and I don't think the production is going to bring out the vampire in anyone. I compliment him on his restraint, if not on his alternative notion, which is to offer the play as a sort of cautionary tale for our own times. His most loving attention is lavished upon the smirky preliminaries to the rape of Lavinia, and upon a gaudy orgy at court, mostly his own invention, as if to warn us glumly of what our permissive ways can lead to. "Are we already in the convulsion which heralds a fall greater than Rome's?" he asks in a programme note, arguing that Titus Andronicus is a play that questions the fundamental tenets of civilisation, and drawing especial attention to the attitudes of Tamora's lover, a Moor, who, "to assert the beauty of his blackness . . . will tear down Rome itself."

Nunn is entitled to his point of view (and it is valid enough in a general sense), but I'm not sure that he is entitled to impose it on a play from which it does not naturally proceed, and even if Titus Andronicus were fact rather than fiction, it could offer only vague and specious parallels with contemporary affairs. I'm especially dubious about the idea of identifying the Moor with the mood and aspirations of contemporary blacks. Shakespeare drew this character as an epitome of pure evil, beside whom his Richard III and Iago are pretty half-hearted villains ("If one good deed in all my life I did, I do repent it from my very soul"), which is probably why Calvin Lockhart, who plays the part, seems most of the time to be mocking it, Among the rest, the opportunities for parody are mostly resisted — except, perhaps, by John Wood, who has a high old time as Saturninus, dripping with effete decadence at the centre of the Dolce Vita goings-on at the palace. Colin Blakely, grizzled and shambl

ing, does his best to support the general view that Titus is a preliminary sketch for Lear; and Margaret Tyzack is valiantly malevolent as Tamora; but it seemed to me that only Janet Suzman gives a performance of any distinction, and she only when relieved of her tongue and the burdens of the play's indifferent verse.