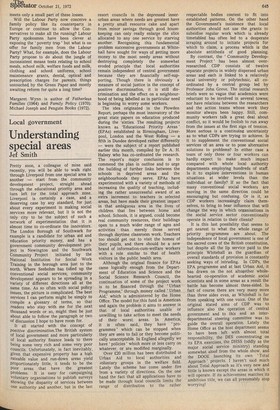 Politicians have always been reluctant to have a population policy, even when, as in 1964, there seemed to be a good reason for having one. During the last twelve months the English birthrate has fallen at a record rate — an 8 per cent drop during 1972 compared with 1971 up until September, following the long decline from 1964. Britain's birthrate is still a little above the long-term replacement level, but in parts of Europe including Western Germany the birthrate has now fallen below this critical point. The experts advising the Common Market Commission forecast a further decline. It is easier than usual for governments to argue that no population policy is needed. Family policy, and not population policy, is now occupying the thoughts of politicians in many countries. Family policy today •is concerned not with numbers but with the quality of the population that• depends deeply upon the family environment. Sir Keith Joseph is seeking the advice of a wide range of organisations on the ' cycle of deprivation' that results in the perpetuation of poverty and underprivilege in certain deprived families from generation to generation. There are now proposals in a Green Paper (Cmnd 5116) that are intended to benefit less privileged families through the tax system.

Many people have the image of a country with numerous families containing only two children as the right aim for good citizens. Nothing could be less realistic. A recent paper by a German demographer said that it now seemed possible that only 65 to 70 per cent of German women of reproductive age would have any children at all, and in order to maintain the population it would therefore be necessary for the women who did have children to average a little over three. It Is unlikely that more than half these reproductive women will have more than one or two children so — presumably — the other half may have to average a little over four! In the United Kingdom at any one time about three-quarters of all dependent children are in only about 22 per cent of all households. Most households contain no independent children at all because the members are childless, or too old or too young. The onerous and expensive task of rearing a family of children is concentrated in a rather small minority of households. The present quite rapid fall in birthrate will change this only a little.

The median income of households of family men is lower than that of childless households. The 22 per cent of households with 75 per cent of the country's children receive less than 22 per cent of the total flow of personal incomes. Not surprisingly people without children to look after earn more and the sort of people who earn more have fewer children. Family allowances, child tax allowances, and more recently family income supplement, have all attempted to modify this distribution of income resulting from the wages system and disparate fertility that puts most family men at a quite formidable disadvantage. The modest redistribution has, however, left the rearing of children among the economically most unprofitable of human occupations at all income levels. The fathers of the great majority of the 22 per cent of families with 75 per cent of the children are family men dependent upon wages.

There is a much higher percentage of family men in the workplaces than in the country, but it is not only a matter of numbers. The older men, mostly in their thirties and forties, are the formers of opinion in the workplace and in the trade unions and these men are quite generally fathers of families. Young men will neither strike nor refrain from striking for higher wages against the advice of the family men. And the young men's discontent with their resources, even on a. low wage, is shallow compared with that of family men who are under pressure from wives and frequently older children to meet demands that cannot be met. It is furthermore not the young single woman but the housewives, often bringing up a family, who are most concerned with rising prices and who infiuence the older men who set the trends of opinion in the factories and trade unions. Family allowances were originally introduced in Europe not simply on compassionate grounds but to reduce wages pressure and were quoted at the time as a classic example of the enlightened self-interest of good em ployers. Family allowances in Europe but not in Britain came to be seen as a part of wages policy. Seen in isolation the present proposal to limit all wage and salary increases to £2 a week during the coming year does not make social sense. It would give £2 to the young men with no dependants, £2 to the young women and only £2 to the family man to share with his wife and children. Fair treatment for the family men is not possible through the wages system. Mr Victor Feather said in 1971 that "the income tax and social benefit systems must take account of the needs of different sized families in a way that a wages system cannot." Family policy and industrial relations are indivisible. During the 1960s government acted quite contrary to the precepts of Mr Feather. In 1967 a married couple with three children came into the standard rate tax range when the household income was £23 weekly. By 1970 following three budgets a married couple with three children began to pay tax at the full standard rate when earnings reached not £23 but only £16.05. Inflation had also debased the value of the pound between 1967 and 1970 so that £16 was worth only about £14 at 1967 prices. Help to family men in kind through the subsidy of school meals, free school milk and welfare foods was whittled away — a policy continued by Mrs Margaret Thatcher.

The Green Paper proposed to correct the bias against family men a little more than in the past by replacing family allowances, child tax allowances and family income supplement by tax credits. The illustrative amounts of these credits in the Green Paper is a flat £2 a week for most mothers and children. This would be a social wage' supplementing the working wage and payable in cash where the credit exceeds the tax liability. Compared with the present system of allowances most people would get something more — a family with two children and earned income of £30 a week would be about £3 a week better off. The Green Paper proposals would make life a little easier for most of the 22 per cent of households with 75 per cent of the children and would help some of the poorest households in particular. The proposals would reduce thereby the personal pressures acting on many of the more influential men at local level in the trade unions. The proposals have the great merit of simplicity, enabling the social wage — £2 a week for the great majority of all family dependants — to be compared with the working wage much more easily than ever before.

However if our aim is to produce an economically and socially more just and stable society it may be doubted whether the proposed tax credits are not too low to be really effective and whether the proposed tax rate of 30 per cent is high enough. The family environment is the major determinant of the quality of the next generation. The new social wage of £2 a week per dependant is the best contribution so far to the heavy net losses of parents engaged in rearing children but meets only a small part of these losses.

Will the Labour Party now conceive a family policy like its counterparts in Europe or continue to allow the Conservatives to make all the running? Labour Party spokesmen have been clever at exposing the 'poverty trap' but what is on offer for family men from the Labour Party? What, for example, does the Labour Party propose to do about the jungle of inconsistent means tests relating to school meals, school milk, welfare foods and milk, clothing and school uniforms, school maintenance grants, dental, optical and prescription charges for parents, things untouched by the Green Paper and mostly awaiting reform for quite a long time?