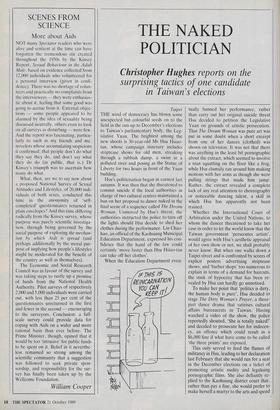 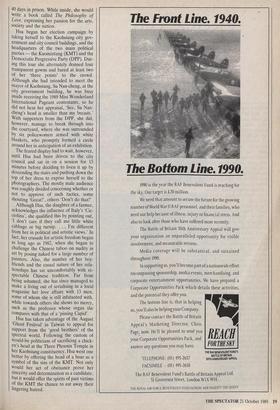 Christopher Hughes reports on the

surprising tactics of one candidate in Taiwan's elections

Taipei THE wind of democracy has blown some unexpected but colourful seeds on to the field in the run-up to December's elections to Taiwan's parliamentary body, the Leg- islative Yuan. The brightest among the new shoots is 30-year-old Ms Hsu Hsiao- tan, whose campaign itinerary includes striptease shows for old men, streaking through a rubbish dump, a swim in a polluted river and posing as the Statue, of Liberty for two hours in front of the Yuan building.

Hsu's politicisation began in earnest last autumn. It was then that she threatened to commit suicide if the local authorities in charge of two cultural centres maintained a ban on her proposal to dance naked in the final scene of a sequence called The Dream Woman. Unmoved by Hsu's threat, the authorities instructed the police to turn off the lights should Hsu decide to shed her clothes during the performance. Lin Chao- hao, an official of the Kaohsiung Municipal Education Department, expressed his con- fidence that the hand of the law could certainly 'move faster than Hsu Hsiao-tan can take off her clothes'.

When the Education Department even-

tually banned her performance, rather than carry out her original suicide threat Hsu decided to petition the Legislative Yuan on grounds of artistic persecution. That The Dream Woman was pure art was put in some doubt when a short excerpt from one of her dances (clothed) was shown on television. It was not that there was anything in the least bit pornographic about the extract, which seemed to involve a man squatting on the floor like a frog, while Hsu clumsily ran around him making motions with her arms as though she were pulling strings that made him jump. Rather, the extract revealed a complete lack of any real attention to choreography or noticeable dancing talent, a skill in which Hsu has apparently not been trained.

Whether the International Court of Arbitration under the United Nations, to whom the dancer threatened to take her case in order to let the world know that the Taiwan government 'persecutes artists', would agree with Hsu's aesthetic appraisal of her own show or not, we shall probably never know. But when one walks down a Taipei street and is confronted by scores of explicit posters advertising striptease shows, and 'barber shops' too numerous to explain in terms of a demand for haircuts, the stink of hypocrisy that has been re- vealed by Hsu can hardly go unnoticed.

To make her point that 'politics is dirty, the human body is pure', Hsu decided to stage The Dirty Woman's Prayer, a three- part dance drama that satirises cultural affairs bureaucrats in Taiwan. Having watched a video of the show, the police reportedly shouted, 'She is totally naked!' and decided to prosecute her for indecen- cy, an offence which could result in a $6,000 fine if what have come to be called 'the three points' are exposed.

This only served to feed the flames of militancy in Hsu, leading to her declaration last February that she would run for a seat in the December elections on a ticket of promoting artistic nudity and legalising pornographic films. She also defiantly re- plied to the Kaohsiung district court that, rather than pay a fine, she would prefer to make herself a martyr to the arts and spend 40 days in prison. While inside, she would write a book called The Philosophy of Love, expressing her passion for the arts, society and the nation.

Hsu began her election campaign by taking herself to the Kaohsiung city gov- ernment and city council buildings, and the headquarters of the two main political parties — the Kuomintang (KMT) and the Democratic Progressive Party (DPP). Dur- ing this tour she alternately donned four transparent gowns and bared at least two of her 'three points' to the crowd. Although she had intended to meet the mayor of Kaohsiung, Su Nan-cheng, at the city government building, he was busy inside receiving the 1989 Miss Wonderland International Pageant contestants, so he did not hear her appraisal, 'See, Su Nan- cheng's head is smaller than my breasts.' With supporters from the DPP, she did, however, manage to break through into the courtyard, where she was surrounded by six policewomen armed with white blankets, who promptly formed a circle around her in anticipation of an exhibition.

The feared display had to wait, however, until Hsu had been driven to the city council and sat in on a session for 15 minutes before deciding to liven it up by descending the stairs and pushing down the top of her dress to expose herself to the photographers. The mostly male audience was roughly divided concerning whether or not to approve of such tactics, some shouting 'Great!' , others 'Don't do that!'

Although Hsu, the daughter of a farmer, acknowledges the influence of Italy's 'Cie- ciolina', she qualified this by pointing out, `I don't care if they call me little white cabbage or big turnip. I'm different from her in political and artistic views.' In fact, her crusade for artistic freedom began as long ago as 1982, when she began to challenge the Chinese taboo on nudity in art by posing naked for a large number of painters. Also, the number of her boy- friends and the casual nature of her rela- tionships has sat uncomfortably with re- spectable Chinese tradition. Far from being ashamed, she has since managed to make a living out of serialising in a local magazine her love affairs with 13 men, some of whom she is still infatuated with, while towards others she shows no mercy, such as the professor whose organ she compares with that of a 'pissing Cupid'.

Hsu has taken advantage of the August `Ghost Festival' in Taiwan to appeal for support from the 'good brothers' of the spectral world. Following the custom of wpuld-be politicians of sacrificing a chick- en's head at the Three Phoenix Temple in her Kaohsiung constituency, Hsu went one better by offering the head of a boar as a symbol of the sins of the KMT. Not only would her act of obeisance prove her sincerity and determination as a candidate, but it would offer the spirits of past victims of the KMT the chance to eat away their lingering hatred.