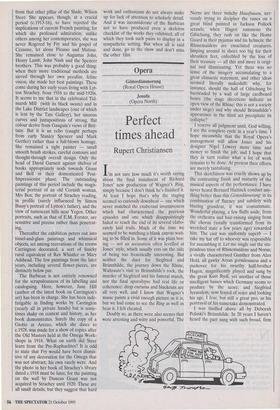 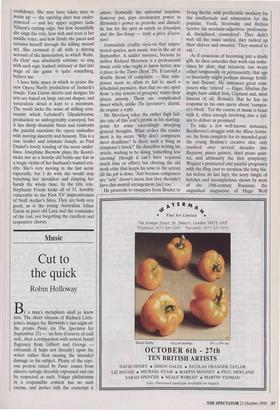 I'm not sure how much it's worth saying about the final instalment of Richard Jones' new production of Wagner's Ring, simply because I don't think he's finished it. At least I hope that's why the staging seemed so curiously downbeat — one which never matched the exuberant inventiveness which had characterised the previous episodes and one which disappointingly failed to reach the end of its several elabo- rately laid trails. Much of the time we seemed to be watching a blank canvas wait- ing to be filled in. Some of it was plain bor- ing — not an accusation often levelled at Jones' style, which usually errs on the side of being too frenetically interesting. But neither the. duet for Siegfried and Briinnhilde, the journey down the Rhine, Waltraute's visit to Briinnhilde's rock, the murder of Siegfried and his funeral march, nor the fmal apocalypse had real life or coherence: drop curtains and blackouts are all very well, and I know that Wagner's music paints a vivid enough picture as it is, but we had come to see the Ring as well as hear it. I felt cheated.

Doubly so, as there were also scenes that were arresting and witty and powerful. The Norris are three twitchy Hausfrauen, ner- vously trying to decipher the runes on a great blind painted in Jackson Pollock scrawls; when Hagen summons the Gibichung, they rush on like the Home Guard in their pyjamas and tin helmets; the Rhinemaidens are emaciated creatures, limping around in shoes too big for their shrunken feet, enfeebled by the loss of their treasure — all this and more is origi- nal and illuminating. Yet there was no sense of the imagery accumulating to a great climactic statement, and other ideas seemed literally makeshift: why, for instance, should the hall of Gibichung be barricaded by a wall of large cardboard boxes (the stage directions indicate an open view of the Rhine; this is not a society under siege) and why should Briinnhilde's appearance in the third act precipitate its collapse?

I reserve all judgment until, God willing, I see the complete cycle in a year's time. I hope meanwhile that the Royal Opera's management will allow Jones and his designer Nigel Lowery more time and money to finish the job; and I hope that they in turn realise what a lot of work remains to be done. At present their efforts are merely tantalising.

This sketchiness was cruelly shown up by the contrasting finish and maturity of the musical aspects of the performance. I have never heard Bernard Haitinck conduct any- thing better than this Gotterdiimerung: in its combination of fluency and subtlety with blazing grandeur, it was consummate. Wonderful playing, a few fluffs aside, from the orchestra and hair-raising singing from the chorus (totally transformed from its wretched state a few years ago) rewarded him. The cast was uniformly superb — I take my hat off to whoever was responsible for assembling it. Let me single out the stu- pendous trios of Rhinemaidens and Norms; a vividly characterised Gunther from Alan Held, all gawky Aryan gormlessness and a pushover for his swarthy half-brother Hagen, magnificently played and sung by the great Kurt Rydl, yet another of those intelligent basses which Germany seems to produce by the score; and Siegfried Jerusalem, now frayed of voice and looking his age, I fear, but still a great pro, as his portrayal of his namesake demonstrated.

I was thrilled above all by Deborah Polaski's Briinnhilde. In 20 years I haven't heard the part sung with such broad, firm confidence. She may have taken time to warm up — the opening duet was under- powered — and her upper register lacks Nilsson's cutting edge, but how beautifully she sings the role, how rich and even is her middle voice, and how firmly she paces and sustains herself through the killing second act. She crowned it all with a stirring account of the Immolation, in which `Rube, du Gott' was absolutely sublime: to sing with such rapt, hushed intimacy at that late stage of the game is quite something, believe me.

I have little space in which to praise the new Opera North production of Janacek's Jenufa. Tom Cairns directs and designs: his sets are based on large cut-out shapes, and naturalistic detail is kept to a minimum. The result lacks the sense of stifling com- munity which Lehnhoff's Glyndebourne production so unforgettably conveyed, but it has sharp dramatic focus and confronts the painful emotions the opera embodies with moving sincerity and honesty. This is a raw, tender and intimate Jenufa, as Paul Daniel's lovely reading of the score under- lines. Josephine Barstow plays the Kostel- nicka not as a beastly old battle-axe but as a tragic victim of her husband's wastrel cru- elty. She's very moving in the last scene especially, but I do wish she would stop hunching her shoulders and clasping her hands the whole time. In the title role, Stephanie Friede looks all of 15, horribly vulnerable to the First XV impressiveness of Neill Archer's Stiva. They are both very good, as is the young Australian Julian Gavin as poor old Laca and the remainder of the cast, not forgetting the excellent and responsive chorus.