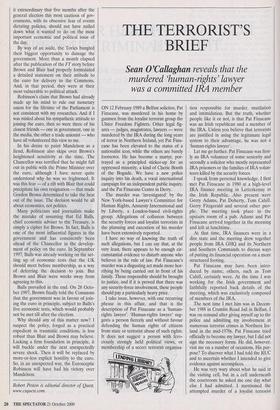 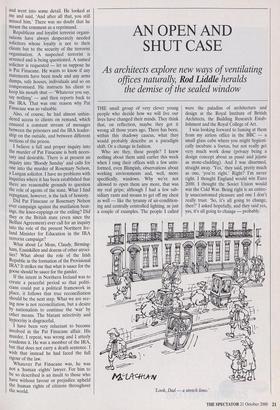 Sean O'Callaghan reveals that the

was a committed IRA member ON 12 February 1989 a Belfast solicitor, Pat Finucane, was murdered in his home by gunmen from the loyalist terrorist group the Ulster Freedom Fighters. Other legal fig- ures — judges, magistrates, lawyers — were murdered by the IRA during the long years of terror in Northern Ireland, yet Pat Finu- cane has been elevated to the status of a nationalist icon, while the others are barely footnotes. He has become a martyr, por- trayed as a principled sticker-up for an oppressed minority, a kind of Cherie Booth of the Bogside. We have a new police inquiry into his death, a vocal international campaign for an independent public inquiry, and the Pat Finucane Centre in Deny.

The murder was 'investigated' by the New York-based Lawyer's Committee for Human Rights, Amnesty International and by Liberty, a London-based civil-rights group. Allegations of collusion between the security forces and loyalist terrorists in the planning and execution of his murder have been extensively reported.

I have no way of knowing the truth of such allegations, but I can say that, at the very least, there appears to be enough cir- cumstantial evidence to disturb anyone who believes in the rule of law. Pat Finucane's murder was a disgusting act made more hor- rifying by being carried out in front of his family. Those responsible should be brought to justice, and if it is proved that there was any security-force involvement, these people should pay a particularly heavy price.

I take issue, however, with one recurring phrase in this affair, and that is the description of Pat Finucane as a 'human- rights lawyer'. 'Human-rights lawyer' sug- gests a person fiercely and without favour defending the human rights of citizens from state or terrorist abuse of such rights. It does not suggest a person with fero- ciously strongly held political views, or membership of a secret terrorist organisa- tion responsible for murder, mutilation and intimidation. But the truth, whether people like it or not, is that Pat Finucane was an Irish republican and a member of the IRA. Unless you believe that terrorists are justified in using the legitimate legal system to their advantage, he was not a `human-rights lawyer'.

Let me go further. Pat Finucane was first- ly an IRA volunteer of some seniority and secondly a solicitor who mostly represented IRA prisoners or the families of IRA volun- teers killed by the security forces.

I speak from personal knowledge. I first met Pat Finucane in 1980 at a high-level IRA finance meeting in Letterkenny in the Irish Republic. Also present were Gerry Adams, Pat Doherty, Tom Cahill, Gerry Fitzgerald and several other peo- ple. The meeting took place in the upstairs room of a pub. Adams and Pat Finucane arrived together in the morning and left at lunchtime.

At that time, IRA finances were in a dire state and the meeting drew together people from IRA GHQ and its Northern and Southern Commands to discuss ways of putting its financial operation on a more structured footing.

Pat Finucane may have been intro- duced by name; others, such as Tom Cahill, certainly were. At the time I was working for the Irish government and faithfully reported back details of the meeting, which was exclusively composed of members of the IRA.

The next time I met him was in Decem- ber 1988 in Crumlin Road Jail in Belfast. I was on remand after giving myself up to the police and admitting my involvement in numerous terrorist crimes in Northern Ire- land in the mid-1970s. Pat Finucane tried officially to become my lawyer, but I did not sign the necessary forms. He did, however, visit me on a number of occasions. His pur- pose? To discover what I had told the RUC and to ascertain whether I intended to give evidence against accomplices.

He was very wary about what he said in the visiting cell, but in a cell underneath the courtroom he asked me one day what else I had admitted. I mentioned the attempted murder of a loyalist terrorist and went into some detail. He looked at me and said, 'And after all that, you still missed him.' There was no doubt that he meant the comment as a reprimand.

Republican and loyalist terrorist organi- sations have always desperately needed solicitors whose loyalty is not to their clients but to the security of the terrorist organisation. A suspected terrorist is arrested and is being questioned. A named solicitor is requested — let us suppose he is Pat Finucane. He wants to know if any statements have been made and any arms dumps, safe houses, individuals and so on compromised. He instructs his client to keep his mouth shut — 'Whatever you say, say nothing' — and then reports back to the IRA. That was one reason why Pat Finucane was so valuable.

Also, of course, he had almost unhin- dered access to clients on remand, which ensured a constant stream of messages between the prisoners and the IRA leader- ship on the outside, and between different sections of the prison. I believe a full and proper inquiry into the murder of Pat Finucane is both neces- sary and desirable. There is at present an inquiry into 'Bloody Sunday' and calls for one into the murder of Rosemary Nelson, a Lurgan solicitor. I have no problems with inquiries where it has been established that there are reasonable grounds to question the role of agents of the state. What I find repugnant, however, is the lack of honesty.

Did Pat Finucane or Rosemary Nelson ever campaign against the mutilation beat- ings, the knee-cappings or the exiling? Did they or the British state (even since the Belfast Agreement) ever call for an inquiry into the role of the present Northern Ire- land Minister for Education in the IRA terrorist campaign? What about Le Mons, Claudy, Birming- ham, Enniskillen and dozens of other atroci- ties? What about the role of the Irish Republic in the formation of the Provisional IRA? It strikes me that what is sauce for the goose should be sauce for the gander.

If the intent in Northern Ireland was to create a peaceful period so that politi- cians could put a political framework in place, it follows that true reconciliation should be the next step. What we are see- ing now is 'not reconciliation, but a desire by nationalists to continue the 'war' by other means. The blatant selectivity and hypocrisy is disgraceful. I have been very reluctant to become involved in the Pat Finucane affair. His murder, I repeat, was wrong and I utterly condemn it. He was a member of the IRA, but that does not carry a death sentence. I wish that instead he had faced the full rigour of the law.

Whatever Pat Finucane was, he was not a 'human -rights' lawyer. For him to be so described is an insult to those who have without favour or prejudice upheld the human rights of citizens throughout the world.