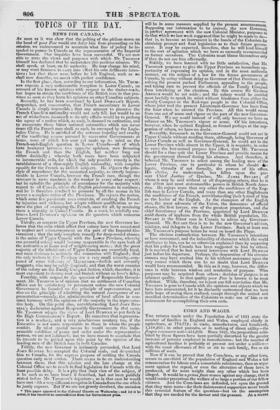 As soon as it was clear that the pelting of the pitiless storm on the head of poor Pow would nbt deter him from proceeding on his mission, we endeavoured to ascertain what line of policy he in- tended to pursue in Canada as the representative of the Imperial Government. Our inquiries have been successful. We are now able to state the views and purposes with which Mr. THOMSON himself has declared that he undertakes this perilous mission. We shall speak, at least, on his authority. He may change his mind, or may want firmness to tarry into effect his own deliberate inten- tions ; but that these were, before he left England, such as we shall now describe, we assert with perfect confidence.

In the first place, then, according to our information, Mr. Tnom- SON expects a very unfavourable reception in Lower Canal", on account of his known opinions with respect to the timber-trade, but hopes to obtain the confidence of the British race in that pro- vince as soon as they learn his opinions on other Canadian subjects. Secondly, he has been convinced by Lord DURHAM'S Report, despatches, and concersation, that French ascendancy in Lower Canada is simply impossible ; that any attempt to preserve the French Canadian nationality would not only fitil, but would be an act of wickedness, inasmuch as its only effects would be to prolong the agony of a nation which, as such, is doomed to extinction, and to exasperate those hitter national animosities which can never cease till the French race shall, as such, be swamped by the Legis- lative Union. He is satisfied of the extreme impoliey and cruelty of the vacillating course pursued by successive Governments at luMne, none of which has over yet made up its mind on the French-and-English question in Lower Canada—all of which have hesitated between two opposite opinions, now favouring the French and then the Lnglish, but neither long nor either decidedly ; whereby both races have been subjected to innumerable evils, for which the only possible remedy is the establishment of a thoroughly English nationality, with complete equality for the French as British subjects. He abjures the prin- ciple-of ascendancy for the numerical majority, as utterly imprac- ticable in Lower 'Canada, because the French race, though the stronger in mere numbers, is the weaker in every other respect : but he- upholds the principle of ascendancy for the majority with regard to all Canada, where the English predominate in numbers ; and he is therefore resolved to promote by all the means in his power a complete union of the Provinces. Ile rejects the notion, which some few passionate Inca entertain, of crushing the French by injustice and violence, but adopts without qualification or re- serve the plan of swamping the French, once for all, by rendering them a minority in United Canada. In a word, he cordially em- braces Lord DcxTuAm'S opinions on the question which concerns Lower Canada.

. Thirdly, as respects the Upper Province, the new Governor be- lieves that the evils which afflict that colony have been occasioned by neglect and ediananagement on the part of the Imperial Go- vernment ; that the only complete remedy for deep-rooted abuses, is the union of Upper Canada with the Lower Province, whereby one powerful colony would become respectable in the eyes both of the authorities at home and of neighbouring states ; that fhe great majority of the inhabitants of Upper Canada are essentially loyal, and most desirous to maintain the connexion with England ; that the only traitors in Cie Province are a very small minority, com- posed of some it ila vera of MACKENZIE—fOOESII and cowardly braggarts, who may be safely despised; and that the worst enemies of the colony are the Family Compact fiction, which, therefore, it is most expedient to destroy root and branch without an hour's delay.

Fourthly, with respect to the question of Responsible Govern- ment, Mr. Tnomsos is of opinion that no settlement of Canadian affairs can be satisfactory or permanent unless the new Colonial Government be founded on the principle of representation, and also on the principle of admitting the natural consequence of re- presentation—namely, the administration of local affitirs in con- stant harmony with the opinions of the majority in the representa- tive body. On this point also, notwithstanding Lord Jonx Rus-

SELL'S declaration against Responsible Government by that name, Mr. Tuosisox adopts the views of Lord DURHAM as put forth in

the High Commissioner's Report. He conceives that representa- tion is a mockery, and a very mischievous mockery too, if the Executive is not made responsible to those in whom the people confide. By what special means he would secure this indis. pensable condition of peace and order under the representative system, we arc not informed ; but we have reason to conclude that he intends to be guided upon this point by the opinion of the leading men of the British race in both Canadas.

Fifthly, the new Governor is intimately persuaded, that Lord JOHN RUSSELL has accepted the Colonial seals, and despatched

him to Canada, for the express purpose of settling the Canada question early next session. There seems to be an understanding between them, that this mission and the late change at the Colonial Office are to result in final legislation for Canada with the least possible delay. It is a pity that their view of the subject, if it be such as we have heard it described, had not been publicly stated before Mr. Tuomsox's departure" as in that case he would

have met with a very different reception in Canadafrom the one which he justly expects. But if we are not grossly deceived, the omission 4." This paper appeared in the colonial Gazette on Wednesday; and let it be Doted, it has received no contradiction from the Government press. - • - , • , • • -;

Will be in some measure supplied by the present announcement. Supposing our information to be correct, the new Governor, in perfect agreement with the new Colonial Minister, purposes to do that which we last week suggested that he might be made to do-- that is, to become an instrument in the hands of' the Colonists for obtaining prompt and final legislation as to their future govern. meat. It may be expected, therefore, that he will lend himself to the sort of agitation which we have so earnestly recommended on former occasions. The Colonists must blame themselves only if they do not use him effectually. Sixthly, we have learned with no little satisfaction, that Mr. Tnomsox proposes to give the Upper Province an immediate op. portunity of expressing its opinion, and in the most authentic manner, on the subject of a law for the future government of Canada, by acting without delay as Governor of that Province ; dis- solving the present packed Parliament, appealing to the people,

and taking care to prevent the officials of the Family Compact from interfering at the elections. By this course Sir GEORGE ARTHUR would be set aside ; and the colony would be enabled most lawffilly to speak its mind without hindrance from either the Family Compact or the Red-tape people in the Colonial Office, whose joint tool the present Lieutenant-Governor has been from the hour when he entered the Province. All this would ensue from one act of sense and vigour on the part of the new Governor- General. We say would instead of will, only because we have no reliance on Mr. tnomsox's vigour or sense. Of his intentions, however, when he quitted England, as formed perhaps at the sug. gestion of others, we have no doubt.

Seventhly, forasmuch as the Governor-General could not act in Upper Canada without residing there, although, being Governor of Lower Canada as well as Governor-General, he could act in the Lower Province while absent in the Upper, it is requisite, in order to carry the lest-named purpose into effect, that Mr. THOMSON should for a time quit the Lower Province and provide means for the government thereof during his absence. And therefore, it behoved Mr. THOMSON to select among the leading men of the Lower Province, one in particular to whom lie should e- legate, virtually if not formally, the powers of his office. His choice, we understand, has &lien upon the pre- sent Chief Justice of Quebec, Mr. JAMES STUART ; of whom it may be said without at all disparaging others, that he is the ablest and most statesmanlike person in British North Ames rice. Ile enjoys more than any other the confidence of' the Eng- lish race in Lower Canada, and more than any other Englishman the confidence of the French, notwithstanding their hatred of him as the leader of the English. As the champion of the English race, the great advocate of the Union, the denouncer of official abuses, the first lawyer, one of the greatest proprietors, and the chief functionary of the Province, appointed by Lord Denims amid shouts of applause from the whole British population, Mr. STUART is the fittest man in Canada to advise any Governor- General. Mr. STUART then is to be the new Governor's adviser, minister, and delegate in the Lower Province. Such at least was Mr. Tuomsos's purpose before he went on board the Pique. The obvious contradiction between Mr. THOMSON'S intentions as here announced, and the imbecility of character which the world attributes to him, can be no otherwise explained than by supposing that his policy for Canada has been suggested to him by others. It is reported that he had several interviews with Lord Duman just before his departure. Perhaps, the desperation of his cireuun- stances may have excited him to hit without assistance upon the very course which there can be no doubt that Lord Dennam would have recommended. Be this as it may, however, the differ- ence is wide between wisdom and resolution of purpose. Wise purposes may be acquired from others : decision of purpose is an inherent quality. In that quality poor Pow is known to be most deficient. While, therefore, we repeat our full conviction that Mr. THOMSON is gone to Canada with the opinions and objects which we have here enumerated, let it be distinctly understood that we have little hope of seeing them realized, except through the united and steadfast determination of the Colonists to make use of him as an instrument for accomplishing their own ends.