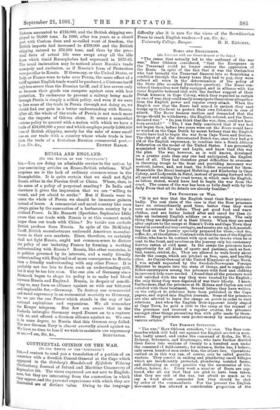 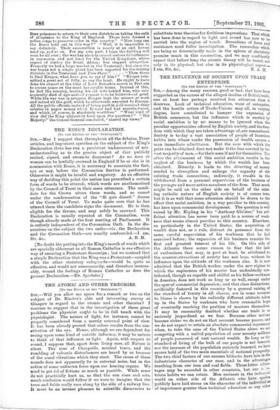 CONTINENTAL OPINION ON THE WAR.

Sre,— venture to send you a translation of a portion of an interview with a Swedish Consul-General at the Cape which appeared in the Gdteborg's Handels-och Sjillahrts Tidning (Gothenburg Journal of Inland and Maritime Commerce) of September 5th. The views expressed are not new to English- men, but they are interesting from the connection in which they appear, and the personal experiences with which they are 'wed are of distinct value. Owing to the language

difficulty also it is rare for the views of the Scandinavian Press to reach English readers.—I am, Sir, &e., BOERS AND ENGLISHMEN.

(An Interview with our Conaul•Genaral at the Cap..) "The cause that actually led to the outbreak of the war was," Herr Ohlsson considered, "that the Europeans in the Transvaal could no longer endure the oppression of the Beers. In spite of the fact that it was the Outlanders who had brought the Transvaal finances into so flourishing a condition through the heavy taxes they had to pay, they were refused all voice in the determination of the policy of the State (the so-called Franchise question). The Boers con- sidered themselves now fully equipped, and in alliance with the sister Republic believed that with the further support of their Dutch kinsmen in Cape Colony, which they regarded as certain in case of war, they could easily emancipate themselves altogether from the English power and repulse every attack. When the English saw that the Boers had armed in earnest they sent troops up to the front to protect their own Colonists in case of attack. The Boers became restless and demanded that the troops should be withdrawn ; the English refused, and the Boers declared war." " Do you think that the war, then, could not have been avoided ? " "Yes, I was fully convinced that if war had not begun then, before two years were out the Boers would have so worked on the Cape Dutch by secret bribery that the English would have had to begin the war from Cape Town and Durban. The object of all the discontented Dutch was, once they had get rid of the English supremacy, to combine into a South African Federation on the model of the United States. I am personally acquainted with Kruger and Leyds, and know that this was the plan. The war, however, as is well known, developed on a greater scale than any one had anticipated, the English least of all. They had therefore great difficulties to overcome in throwing troops to the front and providing necessary war materiel, horses, and, not least, the fodder required for them. Meanwhile the Boers besieged Mafeking, and Kimberley in Cape Colony, and Ladysmith in Natal, instead of pressing forward with all speed and seizing the coast towns, in which case the English, as before stated, would have had to begin the war from the coast. The course of the war has been so fully dealt with bithe

daily Press that all its details are already familiar." •

"It is not true that the English treat their Boer prisoners badly. The real state of the case is that the Boer prisoners have an extraordinarily good time, better than they were ever accustomed to before. They get good food and warm clothes, and are better looked after and cared for than (tc take an instance) English soldiers on a campaign. The only thing they are deprived of is their liberty. When they are sent after capture to the camps at Simon's Town and Cape Town they travel in covered railway carriages, and receive atm ng, hot, nourish- ing food on the journey specially prepared for them,—hot tea, coffee, Sre., at the stations. Contrast with this the case of the English soldier, who has to be content with open cattle trucks when he is sent to the front, and receives on the journey only his customary Service ration of cold meat. In the camps the prisoners have opportunity for all kinds of sports and pastimes, such as foot- ball, tennis, cricket, &c. They are allowed to walk freely about inside the camps, which are pitched on free, open, and healthy sites. As Consul-General of the United Kingdoms at Cape Town, I was myself requested by the Swedish-Norwegian Foreign Minister to inquire into the state of things, and to supply our fellow-countrymen among the prisoners with food and clothing in case such help were needed. I found that all the prisoners were well satisfied with the way they were treated by the English ; the only thing they were deprived of was their liberty. I know, furthermore,that the prieoners at St. Helena and Ceylon are well satisfied with their treatment. Several letters they have written on the subject to relations have been published in the Cape papers, and copied into English journals. Some of the prisoners are also allowed to leave the camps on parole in order to visit relations. And when the English 'Heir-Apparent lately stayed at Cape Town, he paid a visit to the camp at the request of the prisoners and received a regular ovation, the prisoners amongst other things presenting him with gifts made by them- selves. Many prisoners earn pocket-money by manufacturing various articles."

" The war," Herr Ohlsson considers, " is over. The Boor com- mandos which still hold out against the English are few in num- ber, badly armed, and under the command of Botha, De Wet, Delarey, Scheepers, and Kruitzinger, who have further divided their forces into sections of twenty to a hundred men under the command r.f field-cornets ; for instance, Botha has, I believe, only seven hundred men under him, the others less. Operations carried on in this way can, of course, only be called guerilla warfare. They consist, in raiding and plundering small villages which are insufficiently protected, plundering isolated farms, and deitroying in every possible way the necessaries of lite, clothes, horses, &c. Every week a mind er of Boers are cap- tured, who all say that they are glad to have been taken, that they are sick of the war, but afraid so much, as to say a word about surrender lest they should be shot by order of the commandants. For the present the English Government has allowed a considerable proportion of the Boer prisoners to return to their own districts on taking the oath of allegiance to the King of England. These have formed a police corps to preserve order in the country." " How long can the Boers hold out in this way ?" "Well, it is impossible to say definitely. Their ammunition is nearly at an end, horses used np, and so on. For my own part, I hope the fighting will soon be all over ; the war has already caused serious disturbances in commerce, and not least for the United Kingdoms, whose export of timber (to South Africa.) has stopped altogether. Formerly we had a large market in the Transvaal; but since the war began not a single plank has been exported for the mining districts in the Transvaal and Free State" "Then there is Paul Kruger, what have you to say of him ?" "Kruger com- mitted a great act of folly, to say the least. He ought to have done his utmost at the time of Lord Roberts's march to Pretoria to secure peace on the most favourable terms. Instead of this, he fled the country, leaving his old wife behind him, who sub- sequently died of age and—if rumour is to be believed—of grief. While the war was in progress Kruger kept the miners at work and seized all the gold, which be afterwards exported to Europe. All the public officials instead of being paid in gold received their salaries in paper money which Kruger bad had manufactured, and which, of course, is absolutely worthless." " What kind of view did the King ultimately forum upon the question ? " "His Majesty," the Consul-General coneluded, "shared my views."