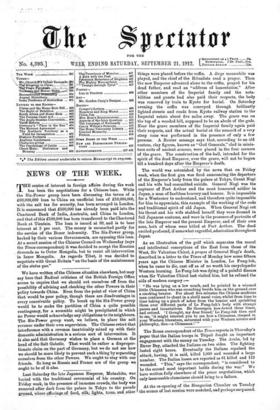 Page 1, 21 September 1912 — We have written of the Chinese situation elsewhere, but may
Close

We have written of the Chinese situation elsewhere, but may

say here that Radical criticism of the British Foreign Office seems to require that we should cut ourselves off from the possibility of advising and checking the other Powers in their policy towards China. Even from the point of view of China that would be poor policy, though there are disadvantages in every conceivable policy. To break up the Six-Power group would be to make the partition of China a quite possible contingency, for a scramble might be precipitated in which no Power would acknowledge any obligations to its neighbours. The Six-Power group want, we believe, to place the salt revenue under their own supervision. The Chinese retort that interference with a revenue inextricably mixed up with their domestic administration is a serious sort of intervention. It is also said that Germany wishes to place a German at the head of the Salt Gabelle. That would be rather a dispropor- tionate claim on the part of Germany, but we do not see how we should be more likely to prevent such a thing by separating ourselves from the other Powers. We ought to stay with our friends. So long as Russia and France are of the group we ought to be of it also.