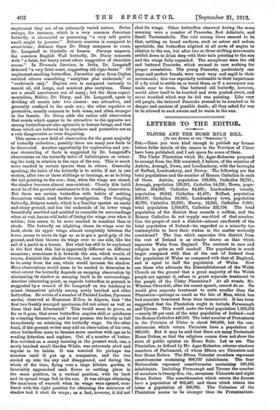 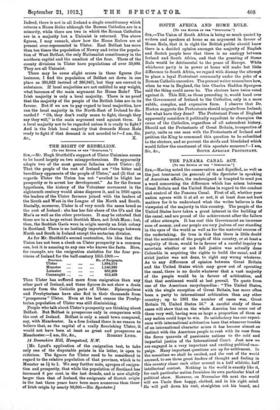 ULSTER AND THE HOME RULE BILL.

[To THE EDITOR 071 THE "SrsoraTor."] SIR,—Since you were kind enough to publish my former letters fuller details of the census in the Province of Ulster have been published, and I ask space for some of them.

The Ulster Plantation which Mr. Agar-Robartes proposed to exempt from the Bill consisted, I believe, of the counties of Antrim, Armagh, Down, and Londonderry, with the boroughs of Belfast, Londonderry, and Newry. The following are the total populations and the number of Roman Catholics in each of these. Antrim, population 193,864, Catholics 39,751; Armagh, population 120,291, Catholics 54,526; Down, popu- lation 204,303, Catholics 64,485 ; Londonderry county, population 99,845, Catholics 41,478; Belfast, population 386,947, Catholics 93,243; Londonderry town, population 40,780, Catholics 22,923; Newry, 12,841, Catholics 9,350; total population 1,058,871, Catholics 325,756. The total population of the district thus exceeds a million, and the Roman Catholics do not supply one-third of that number. Can the people of such a district—almost one-fourth of the total population of Ireland—be regarded as a minority too contemptible to have their wishes in the matter seriously considered ? The line which separates this district from the rest of Ireland is as clearly drawn as that which separates Wales from England. The contrast in race and religion is quite as well marked. The population is much larger compared with that of the rest of Ireland than the population of Wales as compared with that of England, and is equal to half the population of Wales. How can those who advocate the Disestablishment of the Welsh Church on the ground that a great majority of the Welsh people are against it, refuse to grant separate treatment to the people of the Ulster Plantation ? At all events, Mr. Winston Churchill, after his recent speech, cannot do so. He would give separate treatment to units smaller than the Plantation—perhaps as small as the Isle of Man, which has had separate treatment from time immemorial. It has been suggested that the Plantation ought to include Fermanagh and Tyrone. This would make the total population 1,263,372 —nearly 29 per cent. of the total population of Ireland—and the Roman Catholics 449,501. The total number of Protestants in the Province of Ulster is about 890,000, but the con- stituencies which return Unionists have a population of 960,000. But it may be said that there are many Protestant Home Rulers, so that the religious census does not show the state of public opinion on Home Rule. Let us see. The Plantation, as defined by Mr. Agar-Robartes, returns nineteen members of Parliament, of whom fifteen are Unionists and four Home Rulers. The fifteen Unionist members represent constituencies containing 898,737 inhabitants. The four Nationalists represent constituencies containing 160,134 inhabitants. Including Fermanagh and Tyrone the number of members is twenty-five, viz., seventeen Unionists and eight Home Rulers. The constituencies which return the former have a population of 962,497, and those which return the latter a population of 300,785. The Unionism of the Plantation seems' to be stronger than its Protestantism.

Indeed, there is not in all Ireland a single constituency which returns a Home Ruler although the Roman Catholics are in a minority, while there are two in which the Roman Catholics are in a majority but a Unionist is returned. The above figures, I may remark, show how the Home Rulers are at present over-represented in Ulster. East Belfast has more than ten times the population of Newry and twice the popula- tion of West Belfast, the only Nationalist constituency in the northern capital and the smallest of the four. Three of the county divisions in Ulster have populations of over 50,000. They are all Unionist.

There may be some slight errors in these figures (for instance, I find the population of Belfast set down in one place as 385,822 instead of 386,947), but they are correct in substance. If local majorities are not entitled to any weight, what becomes of the main argument for Home Rule? The Irish majority is only a local majority. There is no proof that the majority of the people of the British Isles are in its favour. But if we are to pay regard to local majorities, how can the local majority in the North-East of Ireland be dis- carded ? " Oh, they don't really mean to fight, though they say they will," is the main argument used against them. Is a local majority not to be regarded unless it is ready to fight ? And is the Irish local majority that demands Home Rule ready to fight if that demand is not acceded to ?—I am, Sir,