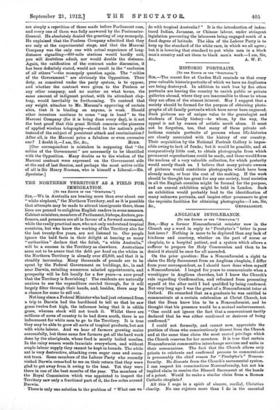 Page 13, 21 September 1912 — THE NORTHERN TERRITORY AS A FIELD FOR IMMIGRATION.
Close

THE NORTHERN TERRITORY AS A FIELD FOR IMMIGRATION.

[To THE EDITOR Or TRH "SPECTATOR."]

SIR,—We in Australia are hearing more than ever about our " white elephant," the Northern Territory, and as it is possible that attempts may be made to attract immigrants there, these lines are penned to enlighten English readers in some measure. Cabinet ministers, members of Parliament, bishops, doctors, pro- fessors, and pressmen are all in favour of a forward movement, while the really practical men, who not only understand tropical countries, but who know the working of the Territory also for the last twenty-five years, are not listened to. Our people

ignore the bald facts in their delight at bearing so many " authorities " declare that the fetish, "a white Australia,"

will be a success in the Territory as elsewhere. Australians

seem not to be aware that the debt per head on the whites in the Northern Territory is already over £3,800, and that it is

steadily increasing. Many thousands of pounds are to be spent by the Federal Government on buildings, &c., in and near Darwin, entailing numerous salaried appointments, and prosperity will be felt locally for a few years—a sure proof that the Territory is flourishing ! The residents are naturally anxious to see the expenditure carried through, for it will largely filter through their hands, and, besides, there may be a chance for some to sell out.

Not long since a Federal Minister who had just returned from a trip to Darwin had the hardihood to tell us that he saw grass twelve feet high, the inference being that it is edible grass, whereas stock will not touch it. Whilst there are millions of acres of country to be had down south, there is no inducement for white men to go to the Territory. It is true they may be able to grow all sorts of tropical products, but not with white labour. And we hear of farmers growing maize successfully, but these same few farmers get all the hard work done by the aboriginals, whose food is mostly boiled mealies. Iu the rainy season weeds luxuriate everywhere, and without ample labour supply they cannot be kept in bounds. The white ant is very destructive, attacking even sugar cane and cocoa- nut trees. Some members of the Labour Party who recently visited Darwin remarked to me on their return that they were glad to get away from it owing to the heat. Yet they were there in one of the best months of the year. The members of the Royal Commission which was appointed to inspect the Territory saw only a fractional part of it, the few miles around Darwin.

do with tropical Australia " It is the introduction of inden- tured Indian, Javanese, or Chinese labour, under stringent legislation preventing the labourers being engaged south of a fixed degree of latitude. The idea of the Labour Party is to keep up the standard of the white race, in which we all agree; but it is lowering that standard to put white men in a black man's country and set them to black men's work.—I am, Sir,