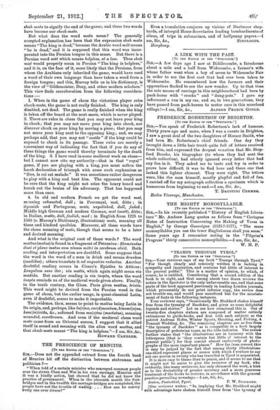 THE PRESCIENCE OF MENCIUS.

[TO THE EDITOR OF THE "SPECTATOR."] S rE,—Does not the appended extract from the fourth book of Mencius hit off the distinction between statesman and politician ?- "When told of a certain minister who conveyed common people over the rivers Chan and Wei in his own carriage, Mencius said it was a kindly action, but showed that he did not know the practice of government. When in the eleventh month the foot- bridges and in the twelfth the carriage-bridges are completed, the people have not the trouble of wading.. . . How can he convey every one over rivers?"

Even a translation conjures up visions of Dartmoor shep- herds, of intrepid Home Secretaries leading bombardments of aliens, of trips in submarines, and of halfpenny papers.—I