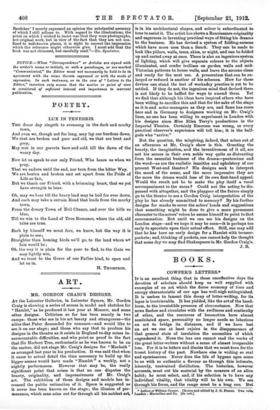 AT the Leicester Galleries, in Leicester Square, Mr. Gordon Craig is showing a series of scenes in model and sketches for " Hamlet," as he produced it last year at Moscow, and some other designs. Criticism so far has been mainly in two camps : those who see in his art beauty and strangeness—the allies that Pater demanded for romance—and would like to see it on our stage ; and those who say that to produce his designs in the theatre as it exists in England to-day raises in- surmountable difficulties, and who point as proof to the fact that Sir Herbert Tree, enthusiastic as he was known to be on the matter, did not stage Mr. Craig's designs for " Macbeth " as arranged last year in his production. It was said that when it came to actual detail the time necessary to build up the bigger scenes would have made "Hamlet" a weekly, not a nightly performance. However that may be, the really significant point that arises is that no one disputes the beauty, originality, and impressiveness of Mr. Craig's art. The exhibition of these designs and models has in- creased the public estimation of it. Space is suggested as it never has been known on the stage ; the illusion of per- manence, which man cries out for through all his noblest art, is in his architectural shapes, and colour is subordinated to tone to assist it. The artist has shown a Renaissance originality and eagerness in inventing practical ways of fitting his dreams to the business. He has devised a system of folding-screens which have more uses than a Snark. They can be made to look like pillars, walls, trees, skies, or night, and can be folded up and carted away at once. There is also an ingenious system of lighting, which will give separate colours to the objects illuminated, and confer trellises on garden walls and mid- Victorian patterns to house walls, and leave the screens clean and ready for the next use. A proscenium that can be en- larged or reduced is another of his schemes. How far these devices can stand the test of workaday practice is yet to be settled. If they do not, the ingenious mind that devised them is not likely to be baffled for ways to amend them. Yet we find that although his ideas have inspired others who have been willing to sacrifice this and that for the sake of the stage as it is and actor-managers as they are, and fame has come here and in Germany to designers working on Mr. Craig's lines, no one has been willing to experiment in London with his designs since Miss Ellen Terry's productions in the Imperial Theatre. Certainly Emerson was wrong, as every practical observer's experience will tell him; it is the half- gods who "arrive."

Bnt the question, the misgiving, indeed, that arises out of an afternoon at Mr. Craig's show is this. Granting the beauty, the imagination, and the inventiveness of it all, are not his scenes in their own noble way quite as distracting from the essential business of the drama—pantomime and the word—as are the realistic inanities and upholstery of our present West-end theatre ? His designs seek to interpret the mood of the scene, and the more impressive they are the more the drama would lose of its own first-hand appeal. Would the result not be to make the play itself a vocal accompaniment to the scene ? Could not the acting be dis- pensed with altogether, and the playgoer of the future simply go to the theatre to see a Gordon Craig interpretation of the play he has already committed to memory ? By his further designs for masks to cover the actors' heads and suggestions that something might be done to give a more permanent character to the actors' voices he seems himself to point to that consummation. But until we can see his designs on the London stage—and we hope it may be soon—it is perhaps too early to speculate upon their actual effect. Still, one may add that he has here an early design for a Hamlet with trouser- pockets; and, thinking of pockets, one cannot help the thought that some day we may find Shakespeare in Mr. Gordon Craig's.