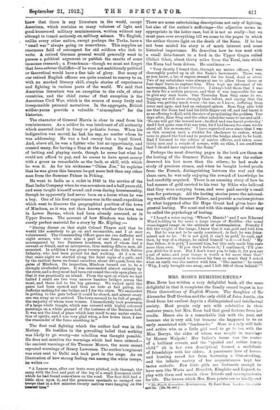 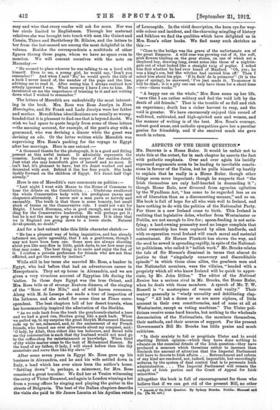 book, all the more delightful in that it completes the family record begun in her Three Generations of English Women. The daughter of Sir Alexander Duff Gordon and the only child of John Austin, she lived from her earliest days in a distinguished and intellectual society. Most people only mix with celebrities in their maturer years, but Mrs. Ross had that good fortune from her cradle. Hence she is a remarkable link with the past, not because she is very old, but because she happened to be so early associated with "landmarks." Here is a lady still hale and active who as a little girl used to go to tea with the Miss Berrys, the elder of whom was sought in marriage by Horace Walpole ! Her father's house was the centre of a brilliant coterie, and the "spoiled and rather lonely child" (it is her own description) formed a multitude of friendships with her elders. A passionate love of horses and hunting saved her from becoming a blue-stocking, and the infinite variety of her acquaintances kept her tastes catholic. Few little girls are fortnnete enough to have men like Watts and Meredith, Kinglake and Layard, to play with them and remain close friends and correspondents for life. The letters which Mrs. Ross prints are so kindly and

easy and wise that every reader will ask for more. Nor was her circle limited to Englishmen. Through her maternal relatives she was brought into touch with men like Guizot and Cousin, Thiess and Barthdlemy St. Hilaire, and the letters to her from the last-named are among the most delightful in the volume. Besides the correspondents a multitude of other figures throng these pages, whom we have no space even to mention. We will content ourselves with the note on Macaulay :-

" He seemed to place whoever he was talking to on a level with himself. Even to me, a young girl, he would say, Don't you remember ?' And when I said No,' he would quote the title of a book I never heard of, the number of the page and the line, advising me to read it. After seeing him I always realized how utterly ignorant I was. What memory I have I owe to him. He Inculcated on me the importance of trusting to it and not writing down what I wished to remember."

The letters of Meredith are undoubtedly the most interest- ing in the book. Mrs. Ross was Rose Jocelyn in Evan Harrington, and Sir Frank and Lady Jocelyn were her father and mother. Mereditbian identifications are usually so wrong- -headed that it is pleasant to find one that is beyond doubt. We. .wish we bad space to quote largely from some of these letters —the amusing account, for example, of the poet's stay with a gourmand, who was devising a dinner while the guest was devising an ode. Or the letter written while Meredith was supervising Mrs. Ross's packing for the voyage to Egypt after her marriage. Here is one extract :- " A thousand thanks for the photograph, it is a good and fitting ,present at this awful instant. It admirably represents the occasion. Looking on it I see the corpse of the maiden Janet. Just what she may henceforth give of herself and no more. It - isn't bad, it's pleasant to have, but it's Janet washed out and decorated with soot. Behind it lies her free youth. She looks darkly forward on the children of Egypt. It's Janet half Copt already."

Here is one of Meredith's rare comments on politics :- "Last night I went with Masse to the House of Commons to hear the debate on the Constitution. . . . Gladstone swallowed the whole Conservative body with his prodigious yawns and eloquence alternately. I never saw a man yawn so naively and . excusably. The truth is that there is some honesty, but small stock of brains on the Conservative ride. I could not wait for Bright. I heard Horsman, who is good enough, and seems bid- ding for the Conservative leadership. He will perhaps get it ; but be is not the man to prop a sinking cause. It is clear that we in England are going down to a lower circle. Natural development; no doubt."

And for a last extract take this little character sketch :-

" He has a pleasant way of being inquisitive, and has already informed me, quite agreeably, that I am a gentleman, though I may not have been born one. Some men are always shooting about you like may-flies in little, quick darts, to see how near you they may come. The best thing is to smile and enjoy the fun of it. I confess a private preference for friends who are not thus . afflicted, and get the secret by instinct."

While still in her teens she married Mr. Ross, a banker in Egypt, who had before that had an adventurous career in Mesopotamia. They set up house in Alexandria, and we are given a very vivacious account of Egyptian life during the 'sixties. In those days Egypt was the true Orient, and Mrs. Ross tells us of strange Eastern dinners, of the singing of the " Rose of the Nile," and of wild harem romances. Along with M. de Lesseps she made a tour of inspection of the Isthmus, and she acted for some time as Times corre- spondent. The best chapters tell of her desert travels, when her horsemanship inspired the admiration of the Sheikhs.

" As we rode back from the tomb the greyhounds started a hare and we had a good run, Sheitan going like a park hack. When we pulled up, to my surprise the great Sheykh Mohammed Hassan rode up to me, salaamed, and, to the amusement of my French friends, who teased me ever afterwards about my conquest, said : 0 lady, by Allah, thou ridest like ten bedaween, and Saoud tells me thy conversation is such that thy husband would not need go to the coffee-shop for entertainment or knowledge. When tired of thy white master come to the tent of Mohammed Hassan. By the head of my father, 0 lady, I will stand before thee like thy mameluke and serve thee like thy slave.'" After some seven years in Egypt Mr. Ross gave up his business in Alexandria, and he and his wife settled down in Italy, a land which has ever since been the author's home. " Settling down " is, perhaps, a misnomer, for Mrs. Ross remained a great traveller. We find her at Venice witnessing the entry of Victor Emanuel, and again in London winning a bet from a young officer by singing and playing the guitar in the streets of Belgravia. The best of the Italian chapters describe the visits she paid to Sir James Lacaita at his Apulian estate

of Leucaspide. In the vivid description, the keen eye for way- side colour and incident, and the charming mingling of history and folklore we find the qualities which have delighted us in

Mrs. Ross's other books. We find many such sketches as this :- "Close to the bridge was the grave of the unfortunate son of the great Emperor. A wild rose was growing out of it, the soft, pink flowers trailing on the grey stones, on one of which sat a shepherd boy, drawing long, sweet notes like those of a nightin- gale out of what looked like a straight twig of poplar. I asked him first whether he had ever heard of Manfred. Oh, yes ; he was a king's son, but the witches had carried him off.' Then I

asked him about his pipe. fisch' de la primaver" (It is the pipe of spring), he answered, 'I've just made it. To-morrow it will be dead; it is a pity one can only have them for a short time —two—three weeks.."'

"A happy one on the whole," Mrs. Ross sums up her life, " save tilt I am rather solitary and feel the void left by the death of old friends." That is the trouble of so full and rich an experience; death has a richer harvest to reap, and the void is greater. We have enormously enjoyed this record of well-bred, cultivated, and high-spirited men and women, and the manner of writing is of the best. Mrs. Ross's courage, robust good sense, and catholic sympathies gave her a peculiar genius for friendship, and if she received much she gave much in return.